This is my favourite of Steve Buscemi’s work as director. His others, specifically Trees Lounge, are good. Animal Factory is great; an almost perfect work of prison cinema. Perhaps it’s because of the intense, raw subject matter. Edward Bunker wrote the screenplay based on his own novel, also based on his own life in the prison system. Most people know Bunker from his work on Straight Time, as well as his acting gig in Tarantino’s Reservoir Dogs. Before his acting and screenwriting career, Bunker dealt in everything from drugs, bank robbery, and extortion to various armed robberies over years. His insight into the world of prison life is what informs all of the emotional connection and intensity of Animal Factory. After Bunker started earning money from the movies he realised that his criminal life had been precipitated by bad circumstances, by the failure to make honest money, and other such things, so he was able to leave a life of crime behind.
In that same vein of circumstances we find ourselves in San Quentin, as Ron Decker (Edward Furlong) is sentenced for a minor bit of drug possession and intent to sell. After arriving at the big house he eventually meets an older, more experienced and hardened convict, Earl Copen (Willem Dafoe), who takes the boy under his wing. They develop a genuine friendship. Yet Decker is forced to fight against the waves of injustice, the threats to his physical safety and to his manhood, all the while questioning if anybody is really his friend after all. Most interesting is the way Bunker’s screenplay allows Buscemi to look at a genuine snapshot of what it’s like to actually live behind bars. So many prison movies and television shows augment the reality, which is enjoyable. What we really want to see is something that dissects the prison system, a film and a story that gets under the skin of those who often look at American jails as “just fine” or whatever other nonsense they sell themselves to sleep at night. Animal Factory is a searing hot prison movie, one of my favourite in the genre. The performances and the story are what makes this so worth it. Right until the end you’ll find the characters are what root you most in the heaviness of the life these men lead.

The title of the film plays directly into its thematic intentions. Ron Decker goes into prison a young, inexperienced man that got a bit too deep in the world of dealing marijuana. A guy who was likely never violent in his life. However, behind bars the other world into which he falls head first necessitates a violent attitude. Almost becoming victim of a brutal rape (several times), getting slashed with a razor, all these sorts of events start to wear down the morality of the young boy that first went through the prison gates. Bunker’s novel and subsequent screenplay examine how people become a product of the system, how young men wind up in a place where the waste of society gets tossed and is allowed to infect them. Yes, people deserve to pay for their crimes. But a guy like Decker, in for dealing weed, or someone who stole a car or robbed a liquor store without hurting anybody, does not belong in a place where lifers can (and will) abuse, rape, and possibly kill them. It isn’t right. In turn, those same semi-innocent young people that come in contact with a life of crime then go on to transform into animals in their own right. By the time Ron will make his way out of prison he’ll be stained, the imprint of criminality branded upon his brain and soul and on his every thought, every action, every move from there on in. These are the sad, hard realities of prison: not everyone in there actually deserves to be, nor do they need to be subjected to the harshness of serving time alongside men doing a life sentence, never to see the light of day again. Those dangerous men influence so much and so many others outside of themselves – often, their victims end up victimising others, and the criminal cycle goes on rambling.

How can anybody fault this movie for its acting? So many excellently on the nose performances. Let’s start with the ever wonderful Mickey Rourke, a man who no matter how bad will always charm me. Luckily, he puts in plenty of solid work here, as he does in many other roles. As Jan the Actress, a gentle transvestite soul locked in the clink, Rourke does a great job in the short time the character appears onscreen. A memorable performance out of a group of them. Seymour Cassel, a veritable classic of independent American cinema, is a proper lieutenant-type, one who is strict but has a slightly relaxed relationship with a guy like Earl Copen. Another guy who makes his character memorable enough within a short period of time. Then there’s the awesome supporting roles out of guys like Mark Boone Junior and Danny Trejo, the latter of whom serves as co-producer and has actual experience in the American prison system (in some of the hardest prisons like San Quentin). MBJ is always a nice addition, a fun character actor whose presence is welcomed amongst the already interesting cast of characters. Trejo helps give the film an authenticity, as he’s got the walk, the look, the insight to make his character Vito so real in a casual way.
Furlong does well as Ron. It’s mostly Dafoe who proves his worth as the foundation of the film. His performance contains some of the hallmarks of the typical prison veteran. Many times he’s completely unexpected, an absolute enigma. But it’s in that we discover Earl is just like Ron, probably why he took on the kid so quickly, so easily; and particularly once we realise he’s not playing Ron and doesn’t plan on raping him or anything of the sort. Earl Copen is a man that ended up in the system, became a product of it, then perpetuated his stamped role in society to the bitter end. Dafoe is an interesting actor I’ve always loved. Here, he proves himself every bit deserving of consideration for one of the greats in his generation. 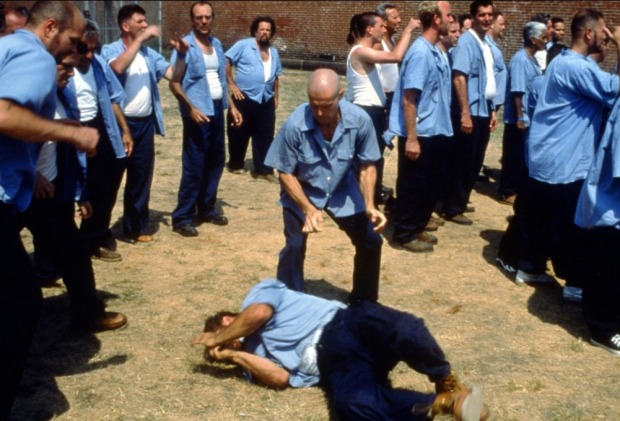 I love this film. Back in 2001 I was almost at the end of high school – I remember picking Animal Factory off a shelf in my local Allan’s Video rental store. The first watch I was sold. Awhile later I found the VHS being sold off; evidently not a popular item there. So I snatched that bad boy up. This is one of the VHS tapes I nearly wore into dust, as I’d watched it too many times to count. Because as far as prison films go, this is one of the grand daddies of them all. Dafoe and Furlong, as well as a cast of other fine actors, make the characters believable, instead of a bunch of literal animals like we so often see in other similar stories. These are genuine human beings with aspirations and dreams, even if they’re skewed or altered by the perversity of the American penal system warping the concept of any American Dream they might see as possible. Nevertheless, Buscemi and Bunker together show off a side of prison life we’re not always privy to in fiction. By doing so, certain issues about the justice system, the various injustices which it inflicts on those who enter it, come to light and are magnified for us to watch – in entertainment, in horror, in a shock that actually isn’t all so shocking because of how desensitised society is nowadays (the fact it isn’t might also be shocking in its own right). You can’t ask more of a film concerning prison than for it to delve into the social implications of the system itself. Far as I’m concerned, Animal Factory is a perfect indictment of how we treat the lives of men deemed guilty and shipped to prison where they’re packed in like sardines and forgotten about until their next court date.