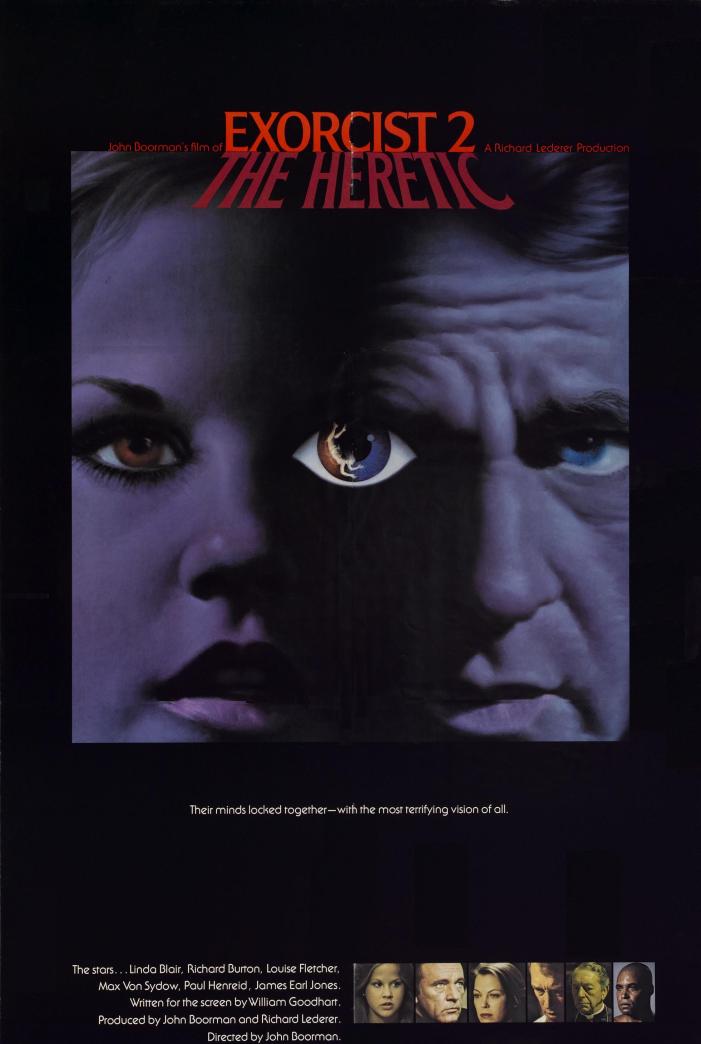 Father Gore’s not going to try and tell you John Boorman’s sequel to the original William Friedkin masterpiece is a great movie. It isn’t, and I know that. Despite the fact it isn’t what it ought to be, there’s enough for me personally to appreciate.
Exorcist II: The Heretic suffered due to constant rewrites. Boorman and Rospo Pallenberg (who in all fairness did good work with the director on Excalibur and The Emerald Forest) seemed to have rewritten continuously, on and off set, hammering the original work by playwright William Goodhart into an unrecognisable form. Even Linda Blair herself said the original script was good. Clearly something got lost in the process.
I love the central ideas/themes. From what it looks like at the core, Goodhart wanted to approach demonic possession through a standpoint of the human psyche, effectively merging theology and science into one. However, Boorman and Pallenberg filled the script with too much exposition, bogging down the pace and wasting the fine acting of Blair, and the legendary Richard Burton.
Disowned even by the director himself, this is an unfairly treated sequel. Again, it’s not good. I don’t agree it’s trash, either. It could never hope to match Friedkin’s original, that’s no debate. Sitting in the shadow of that first film it often doesn’t get the proper attention. Look past the blemishes— they are legion. I won’t pretend to be blind and not see them. I also won’t bash this sequel simply because its predecessor’s a masterpiece. 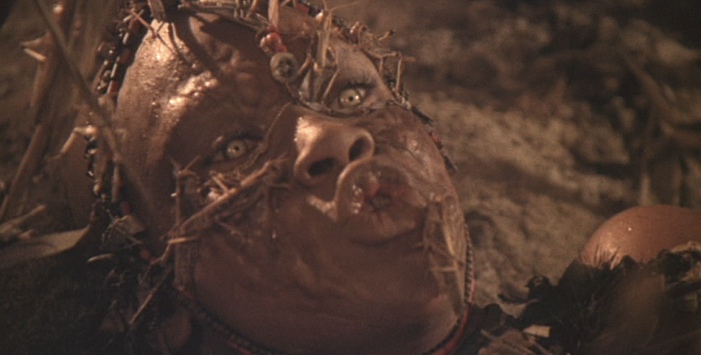 What encompasses my feeling about Boorman’s movie is how Martin Scorsese put it, in terms of theological perspective. He said when you look at that central concept – poignantly observed by Father Merrin (Max von Sydow): “Does great goodness draw evil upon itself?” – then it’s possible to likewise view Regan MacNeil (Blair) as a saint. God’s putting her through the tortures of the damned, testing her. Yes, the heavy-handed writing in the final script harps on that point much too blatantly. That’s the ultimate problem with Boorman and Pallenberg rewriting everything, there’s no telling how well things might have felt if Goodhart’s words remained as he wrote them. Although Scorsese has a great point. This movie has interesting themes, particularly in the vein of viewing Regan’s possession as saintly tribulation.
Most of all, thematically, this sequel goes for a merge of science + religion. The synchroniser – essentially a biofeedback unit – allows Father Lamont (Burton) an opportunity of validation: seeing a verifiable instance of possession, by way of scientific equipment. Of course the dialogue, once more, goes too hard on the expository side. The themes alone are worth entertaining. Lamont’s plagued by guilt after having botched an exorcism. He starts wondering if there even is a God, believing himself to have been duped. The plot taking him into Regan’s possession – the fact Pazuzu essentially has latched onto her psyche – is a path towards redemption. Boorman mangles the execution of the journey. If not this could easily be a worthy successor to the original.

One big part of why I do enjoy the film is von Sydow graciously returned to play Father Merrin. Through Father Lamont, we’re able to take a look back at how Merrin first came in contact with the demon Pazuzu while visiting Africa. There’s so much awesome stuff in these parts, even once Lamont himself goes to Africa. First, when we see Merrin witness the boy Kokumo (later played in grownup form by James Earl Jones) taken by the demon, announcing “I am Pazuzu” with locusts swarming all over his face, the fabled confrontation alluded to in the original comes to life. We gain this further sense, even in their brief initial scene, of the struggle of Merrin to cast this demon out. Later in the film when Lamont travels to Africa, just the locations (obviously set work) are a lot of fun. Boorman wanted to do everything on location in Africa, although that was too much cash to splurge for the production. This little portion actually works, and for not shooting anywhere near Africa (a combination of Arizona desert and soundstage set) Boorman at least managed to give these scenes an eerie look to compliment the story.
Ennio Morricone’s score and the cinematography of William A. Fraker are major elements of Exorcist II: The Heretic which feed its atmosphere. Morricone’s always a treat. Here, he combines tribal sounds with those of a Christian mass, moving between wailing, chattering African rhythms to dreadful Roman hymnals, voices flickering in and out alongside sharp brass in staccato patterns. Too many pieces to mention, an epic score if there ever were one in a horror— sadly, the rest of the movie can’t live up to its greatness. At least Fraker – whose work includes Rosemary’s Baby, Bullitt, Looking For Mr. Goodbar, among others – captures many good looking shots. The excellent feel of those African scenes is mostly due to his prowess behind the camera. He and Boorman conjure up interesting things during the synchroniser scenes when we see Regan’s two selves, the demon grabbing at the heart. If it weren’t for Fraker and Morricone doing their best on the technical side of things, I probably wouldn’t enjoy this half as much as I do.

Father Gore loves this movie. Simultaneously capable of recognising its many, many flaws. I know why people hate it, I certainly get that. But there’s a lot to love beneath the shitty rewritten script. Boorman’s a favourite of mine as a filmmaker, though he’s got a few rotten duds in his catalogue. I admire his willingness to do what he wants, his own way. That doesn’t always translate well. Yet bless him for trying and having a vision.
Exorcist II: The Heretic is one of those movies you can laugh at a bit, and if you really want to, look inside some of what Boorman tries to get at. Ignore his botched work in certain scenes, go deeper to examine those themes of where religion and science might (or can) intersect. More than that, there are hard looks at faith, guilt, and how people deal with the traumas of their own respective experiences in life, whether through faith or otherwise.
This won’t satisfy you if you’re looking for a sequel that’ll carry Friedkin’s legacy of the original on with dignity. Not a worthy follow-up in most cases. Because of the uneven directing and writing from Boorman (as well as Pallenberg on the script), the viewer’s left to do most of the work in finding the diamonds in the rough. Believe me, though— it gets rough.