Michael Smyth (Landon Liboiron) has been taken captive in the woods. In the woods nearby, Declan Harp (Jason Momoa) watches, waiting for the right time. He emerges as the captors draw their guns. They’re not in the mood for any of his “negotiation.” He only taunts the men and their “pretty hats” with the rifles in his face. Out of the trees come arrows for a couple of the men. Then one is left with Michael’s hands and the ties around them about his neck. Declan won’t help. He wants the young man to do the deed. He knocks the man out, but Harp finishes him off. The captors work for Malcolm Brown (Michael Patric), and the one still living won’t play along. Declan only asks twice for information after cutting the man’s ear off, speaking into it like the fur trader version of Reservoir Dogs‘ Mr. Blonde.
Also, have to note: love the opening sequence, as well as the title song. Great, great feel, and gets me into the mood every damn episode.

Over at the Lake Walker camp, some of the tribe are not happy to follow along with Harp, despite his Native blood. Machk (Raoul Max Trujillo) particularly feels he has just as much European in him as any white man.
Lord Benton (Alun Armstrong) chastises Captain Chesterfield (Evan Jonigkeit) for his mistakes recently. He wants to know more about Kitchi, which leads to Grace Emberly’s (Zoe Boyle) involvement. The Lord is not pleased about Kitchi being harboured at the storage house behind the pub. Grace is a smooth talker, but Benton makes clear she is under his thumb. He believes she’s in league with Harp, which we know at least partly to be true, they do know one another quite well. Then Benton childishly has his men search the place, any liquor without a Hudson’s Bay Company stamp to be confiscated. Most of all, Chesterfield and Grace worry about their side business with the pelts. Could mean some nasty trouble.
Along with Dimanche (William Belleau) and Sokanon (Jessica Matten), Michael as well, Declan heads to another camp to meet with Malcolm Brown. He plays the fool about the attack on the Lake Walker village. Harp now lets Malcolm in on his brother’s death at the hands of Chesterfield. * Side note: some of the dialogue here is badly written, particularly lines out of Momoa; too modern-sounding for the period.
Anyways, luckily a battle breaks out. The Lake Walkers have descended upon the Brown camp. Sokanon is a big part of Declan’s crew, even being left to take care of and “teach” Michael. She is a bad ass, and I want to see more of her! They let one of the hostage men free to follow through the forest.

Douglas Brown (Allan Hawco) finds himself beckoned, at the end of a pistol, to go and see Samuel Grant (Shawn Doyle). Hmm, intriguing. Grant wants to meet someone by the name of Carruthers, asking “nicely” for Douglas to help him. I also love Grant as a character. He comes off as the dandy-type that became so well-known in the 1800s, especially throughout London. And he is, but he also doesn’t let anyone walk over him. He is forceful, firm. He’s not a wimpy money man. Or maybe he is, though he’s got a rough right-hand man.
The Brown camp is laid to waste, as Malcolm wants to start a war. Declan instead offers him help with Chesterfield, so long as he makes peace with the Lake Walkers. Or else, y’know: death. Out in the woods, Sokanon shows Michael how to track a person. Instead of lighting a fire to keep warm she teaches Michael that body heat is good in lieu. They talk a bit about London, he talks of Clenna. He obviously loves the girl, longing to be with her again. When he mentions oranges, Sokanon doesn’t understand, which shows the large divide between her and the Old World, even the burgeoning New World close to where she lives. Hell, even Michael’s never actually eaten an orange, so even him in the midst of that Old World, and the New World too, is so far removed from a simple piece of fruit. The haves and the have-nots.
Father James Coffin (Christian McKay) is one sleazy priest, both mooching off Grace’s pub and staring at tits, drinking again unable to stay sober. While Mary (Breanne Hill) the barmaid tries to help him, Benton’s mole Imogen (Diana Bentley) pushes ale on the man. Nothing better for them than to have a drunkard around to do their bidding. Meanwhile, Chesterfield and Grace keep on sneaking, looking for a Montreal buyer for their pelts and digging into the “company ledger” to make sure everything stays hidden. I don’t like that dude, though. He’s like a snake. Just coiled, constantly, about to strike. Worse than that Imogen spies that he just met with Grace out in the storage house. Uh oh. 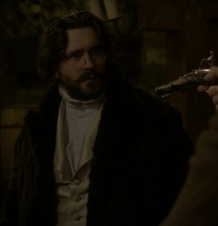 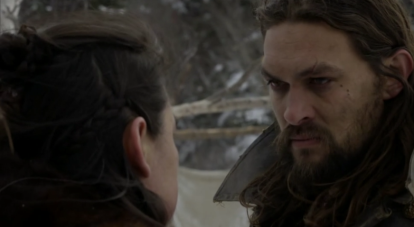 A deal is set to be made between Brown and the Lake Walkers. But will it go smoothly? There’s no telling, not yet.
In Montreal, Grant gets his meeting with Peter Carruthers (Peter O’Meara). They talk of the future of the fur trade. Well, Grant talks, and Carruthers marvels at what he’s seeing, a spectacle of a meeting and a speech. “Does this gentleman ever fucking shut up?” asks Carruthers. He doesn’t dig the whole thing. He isn’t interested with any of Grant’s offers. He has a business of his own. A few saucy words, a shot of liquor, and he’s gone. We start to see some of the temper in Grant come out. I don’t think Mr. Grant is used to being spoken to in such a way.
Over at the pub, Grace meets with Jean-Marc Rivard (Paul Fauteux). She’s looking to… buy his discretion. A job. She wants a letter delivered right into Samuel Grant’s very hands. Out in the storage house Imogen finds the marked barrels with the pelts inside. God damn that could get ugly for Grace. Chesterfield, too. For whatever reason though, Imogen doesn’t Benton right away about the pelts. Why not?
Michael and Sokanon track the man in the woods, getting closer in the meantime. They talk of Harp. He was with Sokanon’s sister, in love, with a family. He was a nicer man then, Declan. Then Benton’s men murdered his wife, his child. That is devastatingly tragic. “He became wild, dark,” Sokanon says. Although she says that what he seems to see in Michael is what he used to be, before all the tragedy. They track the man to where Chesterfield sits waiting by a fire; he’s promptly paid, then murdered. 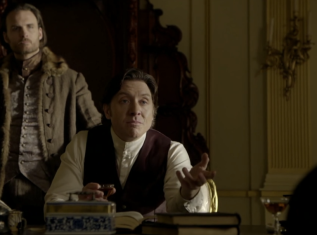 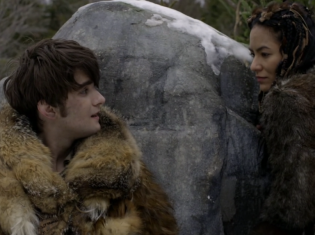 Back to the camp Sokanon rushes with word about Benton and Chesterfield’s involvement re: the Lake Walker troubles. Brown is definitely not happy about any of it, either. There’s a little bit of disharmony between Harp and Dimanche, as the latter worries about the Lake Walker response, Machk especially.
Imogen reveals herself to Grace, this is why she hasn’t said a word about the pelts. Seeing the pub owner stand up to Benton gave her hope; good woman! Maybe now this will help Ms. Emberly escape further trouble with the rotten Lord.
Douglas receives Carruthers at his place. In the shadows, Cobbs Pond (Greg Bryk) appears. He has a gun belonging to Carruthers. After a bit of playing around Pond puts a bullet through the man’s eye. He leaves poor Douglas with the clean-up.

When the Okimaw of the Lake Walker tribe receives Malcolm with an apology for any troubles, the reveal of Benton’s involvement doesn’t make her happy. Although Malcolm makes clear he isn’t at fault. Okimaw decides to “look to the future” and accepts peace. Machk doesn’t like any of the supposedly peaceful meeting with Brown. He and his crew decide that Brown must pay. They knock Harp down, taking Malcolm in their grip. They want to kill him. Maybe Declan, as well.
But the Okimaw agrees then to let Machk take the title, to lead. He wants Declan out, all of his people. To which Harp submits, but warns: “You won‘t be Okimaw for long.” 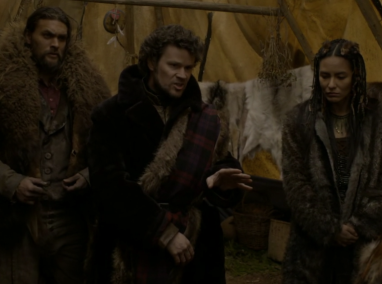 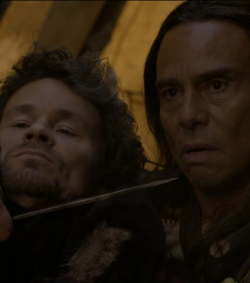 Another exciting episode. Really loving the series, it gets better and grows on me with each passing chapter. Up next is “Wolves” and I think Michael Smyth and Harp both will be getting lots of time, more than usual. Their relationship, the one that’s budding, is intriguing and should offer plenty of narrative fun.