As a long time fan of Key and Peele, soon as the news dropped Jordan Peele would make a horror film I was beyond excited. Because in some of the skits they did, it’s easy to tell he’s a horror fan. Not just a fair weather fan, either. He’s a genuine connoisseur of the genre, far as I’m concerned.
That only becomes more evident when you’ve actually seen Get Out. I feel totally confident in saying it’s one of the best horrors since 2000, up there with others I adore such as High Tension, Kill List, Inside, Spring, Sauna, The Witch, and more.
Moreover, Peele makes this feature a total work of an auteur, a unique and inventive picture. At once it’s entirely his own, and also bears the mark of Peele’s influences on its sleeve with pride. Above all the story is disturbing, compelling, critical of social constructs of racism (and no, the liberals don’t escape scrutiny), full of psychological horror to unsettle you and mystery so thick you’re liable to feel the breath catch in your throat. 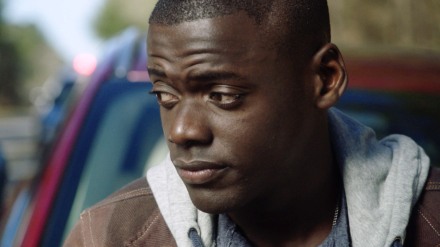 Disclaimer: If you’ve not seen the film, turn back! A good discussion is going to involve spoilers, and I’d hate to ruin any of the plot for you beforehand.

In interviews, Peele has made clear he loves The Stepford Wives, particularly in that it holds a lot of social criticism within its horrific sci-fi machinations. What we get here has a vein of the William Godlman-penned adaptation, though obviously skews into the idea of racism. But it isn’t solely racism. Intriguingly enough, the story – specifically its characters – deals with liberal racism, the type of stuff not always overtly evident to those who hold liberal beliefs and spend their days believing they’re not in the slight bit racist. And the creeping sense of this racism builds, as Peele takes us inside the affluent white family of Rose Armitage (Williams), to whom she introduces her African-American boyfriend Chris (Kaluuya). The terror isn’t terror at first. It starts off as comical: Rose’s father Dean (Whitford) fawning over Barack Obama, worrying that having a black maid and a black housekeeper reflects poorly on him as a self-professed liberal, and her mother Missy (Keener) with her hypnotism bumping up against Chris’ smoking habit.
Once the facade wears off though, Get Out descends into utter terror. It’s all storytelling, character development, suspense. There’s a moment when poor Chris realises what exactly is afoot, including the depth to which it goes that he, and many of the audience, had never once anticipated. Even if, like myself, you feel that you know where everything is headed it’s how Peele takes us there which ultimately holds power.
My favourite image: directly after Chris discovers the extent and hideous nature of why he’s been invited to the Armitage estate, he notices cotton stuffing coming out of the chair to which he’s strapped. Now, this is part of his eventual escape. However, it’s a subtle little moment where we see a beautiful, brown leather chair on the outside, and the white stuffing within, as if the very image of what is happening at the hands of the Armitages. Maybe not intended at all in that way. An observation, one I couldn’t stop thinking of after the fact. 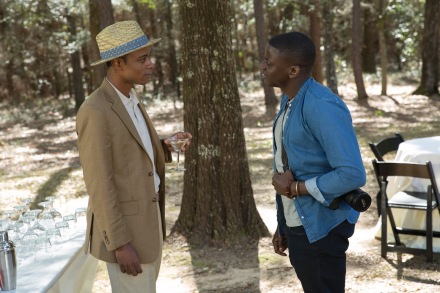 My idea, and I’m sure the same idea of many others who’ve seen the film, is that the story is an overall allegory for the idea of cultural appropriation. Again, I likewise feel Peele is gunning at another part of the problem aside from the obvious racists. And as a mixed race man he has a unique perspective on the concept of racism, being a part of both worlds at once and seeing things from many angles. The Armitages are a rich bunch of white people whose fascination with Rose’s black boyfriend verges between obsession and bigotry, teetering on the edge as is the case in real life; something people like that don’t see on their own. When the horrific truth of the family bubbles up to the surface, it’s too late. And worse is the fact Chris saw it coming, but trusted his girlfriend to be different from the rest of her family.
This is where the core of the plot lies, in the concept that this sort of racism it exists all around us. In everybody. I can look at things I’ve said or thought in the past that, to me, felt innocuous. Through the eyes of my friends who are from different cultures, those things might appear in a different light. Peele makes his points in an elaborate way, substituting horror and mystery for what could’ve otherwise been brought out in a drama. By doing so, he makes the whole story more disturbing. There are hard hitting dramas and thrillers out there which take on racism, some of them very well. Get Out‘s strength comes from the way the story grips you, makes you laugh, disarms, then pounds you into submission with its subtle creeps.

There are a good few movies that I personally consider five-star pieces of cinema. Not all of those are actually perfect, to my mind, but they’re still fantastic. Get Out is a five-star flick that’s perfect in my eyes. I wouldn’t change a thing. And considering, for a film lover, that I hate sitting in theatre seats (being a big, tall man isn’t always fun), after the credits rolled I could’ve sat back for another viewing. It’s satisfying, rife with tension and suspenseful moments. The cast each bring their respective talents. Kaluuya’s star shines brightest. He knocked me out with his performance, carrying every scene he’s in with a grace not always present in the horror genre.
Peele’s examination of the subtle racism amongst liberal white people is something I won’t soon forget. I hope he’ll do more in the horror genre, and my hope is that he’ll continue bringing his point of view on the racial sociopolitical landscape; maybe even go a little bigger with it next time. He’s a sharp guy, dosing us with just as much hilarity, dark comedy, and satire as there is horror.
Go see this, support horror that doesn’t play by the rules. Also, white people need to watch this. You can genuinely learn some things. This is not a politically correct film, clear by all the white idiots out there already crowing that Peele is anti-white and other nonsense (I’m sure he and his white mother would disagree). And I love that someone like him has put this into the filmsphere. It belongs. Another hopeful part of Get Out‘s success is that other filmmakers from the black community, and other cultures, will push to give us their vision of their experiences. This movie’s done a ton for the genre in one swoop, reassuring moviegoers that not all horror has to be cut from the same cloth, and that compelling perspectives against the grain are out there, ready to terrify us.