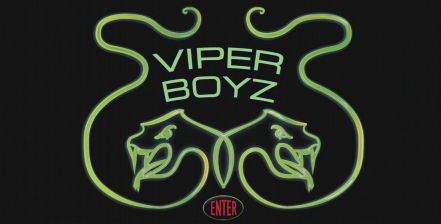 The dark side of the industry is in full effect throughout King Cobra. Aside from the relationship between fictional Kocis and Lockhart, which brings up issues of sex with a minor, the plot goes even darker with Joe (James Franco) and Harlow (Keegan Allen); most of all the latter. Harlow’s story is sad – the saddest – full of despair and loneliness and a search for happiness that’ll surely never end. The hurt of his character is terrifyingly real, and Allen plays him with a haunting, dead-eyed look.
Harlow and Joe represent the desperate side of the industry, the men who resort to prostituting themselves. On the other side, Stephen’s obsession with Lockhart turns their relationship into one of pimp and prostitute, too. Like a pimp, Stephen wants total control over Brent, so much so he makes the whole thing into a personal and legal battle; something which goes terribly wrong, for all of them. Meanwhile there’s Lockhart in the middle just trying to make money and find a nice man. Like a postmodern American Nightmare.
Moreover, Stephen represents a side of the gay community we don’t often see when we get those normal, positive looks at regular gay men and lesbian women (which are important in their own ways for representation). What he, and his real life counterpart Kocis, illustrate is how some men almost go back into the closet even though they’re out. They don’t fully accept themselves. In his case, it’s because he likes underage boys. It gets so bad that Stephen lives in a “cookie cutter community” and he’s there amongst his neighbours, all the while he takes Brent and other young men inside, out by the pool, and films them fucking. He lives in the open, though keeps a barrier up between him and the world. 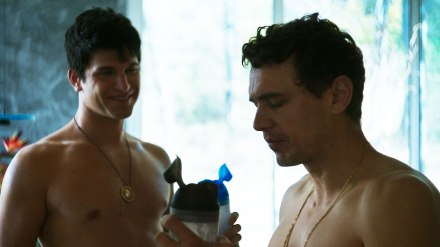 Immediately, the stylised cinematography with its neon glow and filtered shots grabs attention. We feel as if we’re in an actual porno most times, not from the actual bare skin onscreen but the visual style. At other times the frames are draped in shadow, the way most of the characters are all under a cloak of darkness, living their lives on camera yet also behind it in the figurative dark spaces of life from one trick to the next.
The performances hooked me in. Allen is my favourite, he’s intense and brooding without being overtly animated; he makes you feel the darkness of his character Marlow. Alongside him as Joe, the ever interesting Franco provides us with a ferocious, unrelenting character whose sexual appetite does not mix well with business.
Still, the best performance of all has to be from Slater; his late career is proving full of surprises from Nymphomaniac to Mr. Robot and this film. Stephen isn’t a likeable character, he’s a sleazy guy. But Slater doesn’t play him sleazy, he somehow imbues the guy with a heart, no matter how dark. He’s a desperately clingy man, one who uses his powerful position as producer to rope in young boys with whom he can play, and hopefully control. He’s sad, he’s nasty. And there’s so much humanity to this otherwise monstrous man with Slater in the role.
What I love most about the character is that the writing allows him to be who he is, instead of trying to pretend like the gay community can’t have any bad apples. The real Lockhart’s criticism feels unfair, though admittedly I’m not a gay man and so my opinion isn’t the be all, end all. That being said, I think the best representation for any community, any race (et cetera), also involves those bad characters along with the good.

There’s a major loss of innocence in King Cobra. One thing Marlow makes very clear is that everyone has a story. What people see on that screen, the flesh and the orgasms, is the end result of victimisation, of broken hearts and broken dreams. It is what comes at the end of a long road of pain. I don’t care if you think that’s not cool of me. Personally, I don’t support the porn industry. Nor do I judge anybody; I used to watch it, then awhile back made a personal pledge not to engage with it any longer. I just don’t think it’s healthy, you can’t fault me for that.
Neither can you fault the film. These characters are real people, if not dramatised for the sake of entertainment. Their story is largely real and is, aside from what actually happened to Kocis a.k.a Stephen, also the story of many others who’ve been sucked into the undertow of the exploitative, violent industry of pornography.
King Cobra doesn’t ask or answer any big questions. It looks deeply at the damage done to people who’ve fallen prey to the predators in the industry, as well as those who were preyed upon before and then came to the industry later only to be re-victimised. If you have a level head about the topic in general, this movie’s for you. There isn’t any judgement. Then again, people like Kocis deserved to be judged, only they don’t deserve what he got, either.