Poor Agent Dale Cooper (Kyle MacLachlan). Still Dougie, still infant-like. He’s not left work since after he finished. Plus, he can barely converse with anybody. He only knows a few words like “home” and his name and a few others like “red door” – the door of his house. A cop helps him along back home to Janey-E (Naomi Watts), his doting wife. He keeps rubbing the cop’s badge, too. Memories of his old life. The absurdity of the whole situation is so perfectly hilarious. There’s clearly something wrong with him and people treat it like it’s only a mild little thing. Suburban life is so zombified that this version of Dougie is somehow no more noticeable or worrisome than the general cold.
The best is seeing him with Dougie’s boy, Sonny Jim. They’re essentially on the same wavelength. Although young Sonny Jim is likely a few steps ahead of this depleted Agent Cooper. The only part of Dale which seems to remain is his love of coffee and food; the simple things.
Janey-E stumbles onto photos of Dougie and Jade, the working girl he was with prior to the switch. So now that’s another bit of trouble his infant mind can’t really compute, and it isn’t even his life. Doesn’t matter for him ultimately. Someone calls for Dougie, too. Clearly the guy’s into big debt with some rough bastards. Janey-E offers to meet the caller the next day.
Then we go to the Black Lodge, as Dale sees through the border between the worlds while running a finger along the black-and-white Lucky 7 Insurance logo. Calling to mind the floor of the lodge. The One-Armed Man Phillip Gerard (Al Strobel) calls out: “Don‘t die.” The spirits of the lodge are still with him in there, in his mind. He’s very slowly seeing things, he has a vision. A kind of second sight, like how he picked out the machines ready for jackpots. He takes out a pencil and on the files from the office he draws a figure similar to the tree with a brain for a head from Part 1. Then a ladder. He draws another ladder, as well as some stairs. 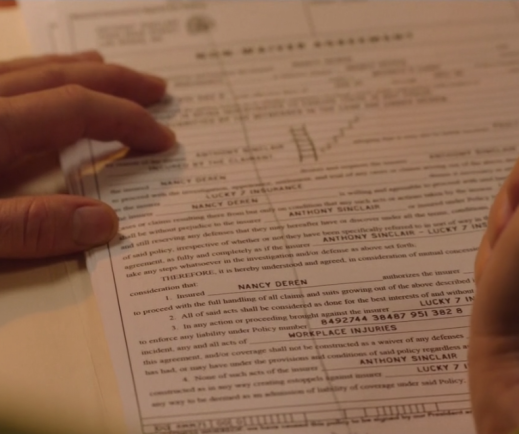 “Fuck Gene Kelly, you motherfucker.” Best insult ever to someone using an umbrella. Special Agent Albert Rosenfield (Miguel Ferrer), on a mission from Gordon Cole (David Lynch), heads into a dark, neon-signed club. He’s there to see Diane (Laura Dern); FUCK YES! Oh, lord. How I love thee Ms. Dern. What a reveal, too. Been waiting to see this woman for far too long. Doesn’t disappoint.
Richard Horne (Eamon Farren) is picking up some cocaine, meeting with Red (Balthazar Getty), a strange dude accompanied by men with guns. Apparently he has a problem with his liver, has to beat it a bit. There’s a lot more nastiness in the small town of Twin Peaks than even 25 years ago. Darkness never left. Used to be Bobby Briggs (Dana Ashbrook), now a deputy sheriff, was the bad boy. Looks like the Horne family still has its share of bad apples. And Red, he’s creepy. He’s psychotic, also a bit of a magician.
Over at the Fat Trout Trailer Park, we see Carl Rodd (Harry Dean Stanton) after all this time. He’s headed into town, same time each day. He hasn’t changed, either. Good man. Loves his cigarettes. In town at the Double R, Shelly Johnson (Mädchen Amick) works her shift as usual, as does the giggling waitress. Life goes on and on in their slice of America.

Flying down the road raging on coke, Richard goes flying through a crosswalk and kills a child in front of a bunch of people, bloody everywhere. And he keeps on going, doesn’t even look back. A girl who’s a regular at the Double R sees his face as he speeds off. Carl stumbles across the scene, shattering the tranquillity of his day prior. He looks up to the power lines above, seeing a strange light dissipate into the electrical wiring. He goes to the woman and tries comforting her what little he can. A tragic scene.
Note: The #6 electrical pole from Fire Walk With Me and Missing Pieces is specifically shown, panning up to the wires overhead. “Electricity” is spoken by the Man from Another Place in Missing Pieces. See here.
Dougie’s blown-up car is being investigated. A cop has to climb up over the junkie mom’s house as she yells out “one one nine” over and over. There’s so much swirling around Dougie Jones that if someone doesn’t find Dale soon it’s gonna be a shitstorm eventually.
In a hotel room a man rolls dice, writing down numbers. Under his door comes a thin envelope. One from a man named Duncan Todd (Patrick Fischler), whom we saw in a previous episode, the one seemingly being extorted. The man opens the envelope to find two pictures, he then goes over their faces with an ice pick. Fucking creepy. One face belongs to Dougie Jones.
Over at Lucky 7, Dougie-Coop is at work, wandering around like usual. Watching on is Anthony (Tom Sizemore), clearly a man with things to hide. The boss doesn’t seem to love Dougie’s “childish scribbles” on the files. A mess. Somehow in the pile of nonsense the boss discerns what’s meant to be happening. He figures out the symbols, connecting them. Just as the viewer does while watching Twin Peaks. Do like Dougie: “Make sense of it.” This cracks me up, it’s so perfect in a comedic way and also in that way of post-modern thought in terms of how we interpret what we’re watching. Lynch and Frost are mindbenders. Love every second of it.

Janey-E goes out to meet a couple sketchy-looking dudes, Tommy (Ronnie Gene Blevins) and Jimmy (Jeremy Davies). They’re trying to get over $50K out of Dougie. She’s pretty tough, all the same. She offers up $25K to be done.
The man with the pictures murders his first target. Brutally. He has to do a few murders, in fact. To keep anybody from talking much. All with that ice pick. He almost cries after he’s bent it. Such a surreal moment. Another note: Lynch has a fascination with fucked up teeth, more of which is evident here.
Out in the woods, child killer Richard stops to see how much blood is smeared across his bumper. He washes it off. How long can he hide it?
Back with Deputy Chief Hawk (Michael Horse), we see him drop an Indian Head coin. He picks it up, noticing another Native logo on the stall of the toilet door; screws missing at the corner. So he takes a closer look inside, prying it open. Inside he finds papers full of writing.
We find out more about Sheriff Frank Truman (Robert Forster); his son killed himself, a soldier. Part of why he and his wife are at odds much of the time, because of her grief over what’s happened. That’s a sad story.

Another interesting episode. This one a bit more straight forward, and even then it’s a wild ride. Interested to see more of the Trumans, and I’m itching to know about Harry. We’ve got another 12 episodes, there’s plenty to uncover. Until next time, Peakheads.