Mrs. Ross (Erin Shanagher) comes to see Tommy (Cillian Murphy); mother of the boy Arthur (Paul Anderson) killed boxing. It’s coming up on her boy’s birthday, so she’s not feeling great. Also could be the fact that Luca Changretta (Adrien Brody) and the Mafia are using her as a way to get at the Shelby family. The woman wants to invite Arthur to a small get-together at her home, as a “gesture” of forgiveness. Hmm. Hopefully our lad’s paranoia is high, with the Italians looking to kill them all.
The head of the Shelby clan’s no slouch. He’s got the Blinders together, along with Johnny Dogs (Packy Lee), arming themselves, studying all the exits and entrances to Artillery Square, where Arthur will be for the get-together.

At midday Arthur goes over to the woman’s home, and she invites him in after checking him for weapons. Just in case, y’know? They have a seat, it’s also more than obvious she’s nervous. She asks him about the rumours he’s “welcomed Jesus” into his life, his wife, so on. She wonders if he feels redeemed. And he tells her: “We both know that forgiveness is out of my hands.”

Outside, all the boys are watching, positioned at various places in the Square. Then they see a girl Mrs. Ross sends from her house, waving to men in the alley. However, it’s just a decoy.
At the very same time, Michael (Finn Cole) is about to be attacked at the hospital; the real target. Luca himself puts a bullet in one of the Blinders watching his room. Then he steps in for a word with the young, injured man. He puts a gun to his forehead, pulls the trigger, and it doesn’t fire. He didn’t load it. All he says before he leaves is “tell your mother we have a deal.” Oh, shit. Polly (Helen McCrory) is truly turning this into a shit show.
Tommy gets a call out to Charlie (Ned Dennehy) to get word to Bonnie Gold (Jack Rowan) about Italians headed their way. When Luca and his men get out into some lonely forest, they find an accident blocking the road. They’re fed up waiting and get out to take care of it themselves, but the bobby on the scene refuses to let them. Luca feels paranoid, telling his driver to go. Except the driver’s throat is already cut. Now gunfire from the trees rains down, as the gypsies try taking out all the Italians. Luca gets away, but Aberama (Aidan Gillen) and his boys got a couple of the gangsters.
At the hospital, Michael is pissed with his mother. He asks Pol about the deal. She rambles about “strategic war between families” and all that, revealing herself to her son. He isn’t happy. She believes they’re in over their heads, the only way to get out? Turn on her own family, apparently.

“We‘re gypsies, we‘re already underground.”
We see May Carleton (Charlotte Riley) come into Birmingham by boat to see Tom, horse business. She’s impressed with his horse, as well. She needs a few papers signed for ownership. Although maybe it isn’t the only reason she came. Either way, she’s realising that nothing, not the death of a wife, a brother, will ever change Mr. Shelby into anybody else than he’s ever been. Simultaneously, Lizzie (Natasha O’Keeffe) is sniffing around, trying to keep her man from straying too far, as is his nature.
Luca gets in touch with Pol, making sure she knows they can get to her boy at any point in time, anywhere. So she has to make sure Tommy winds up in the palm of their hand. She’s kicking around the office, looking for him now. She winds up with Lizzie, reading leaves for her, so long as she gets to see Tommy’s diary. Pol knows he’s free on Friday. Will she plot something horrible? AND, is Lizzie pregnant with a Shelby?
At the gym, King Maine (Daniel Fearn) says that young Bonnie is ready for the ring, even if he’s a bit of a cocky little shite. Still, the lad is prepared, and so Tom’s got a fight setup in Camden Town, against a man called Goliath (Dino Kelly).
Later, Tommy and May go see the distillery he’s setup while they’re back in Small Heath. He explains the booze business they’re gearing up, asking for her opinion on his recipes. She has a taste of gin; “too sweet.” Thus begins a bit of intimacy, though it’s short lived.

Ada (Sophie Rundle) goes to a Communist Party meeting flaunting her married named Thorne, inviting Jessie Eden (Charlie Murphy) for a drink. All under the guise that she’s the more reasonable Shelby. But certainly Ada isn’t there on her own. She’s been sent by the boss, her big brother, to offer “parity.” What do they want for the deal? Tommy supposedly wants to talk with Jessie about “socialism and revolution.”
Ah, we’re finally getting some Alfie Solomons (Tom Hardy) again! He’s dropped into Small Heath with Goliath, the boxer, who’s more than worthy of the name. Alfie and Tommy have a chat about gin and rum, and Italians, too. He advises the gin’s not sweet enough. After that they get talking about Luca, his men. Quite an antagonistic conversation, as usual. The baker’s still got a saucy mouth.
“Sicilians, they don‘t trust nobody haven‘t fucked a goat on the morning of their first pubic hair, they‘ve got traditions.” 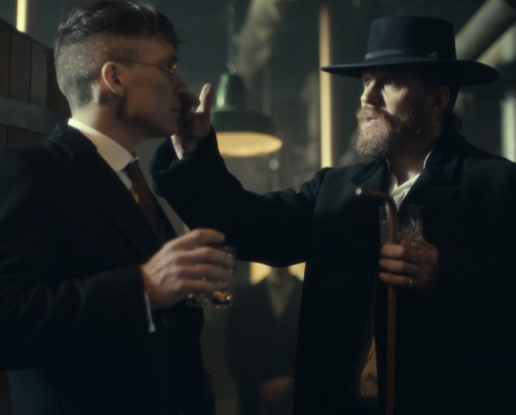 So the boxing match is a go. That’s not all Tommy’s got on his mind. He’s got no time to stop being paranoid, not now. He can tell Michael knows more than he lets on. And though he doesn’t know Aunt Pol is working against him, he definitely understands something is about to happen.
And as Tommy heads off down the road, Luca, a truckload of his men, are headed off behind him, tons of guns in tow.
Man, Peaky Blinders is just a masterpiece of a series! Every episode is solid, never once have I been bored. Even in the quieter moments, the intensity is always there. Love the dialogue, too. Cracking stuff. “The Duel” is next, the penultimate Season 4 episode already.