We’re here, the end of Dark Season 1. I don’t want it to end yet!
We begin on the day Mikkel (Daan Lennard Liebrenz) disappeared.
Peter Doppler (Stephan Kampwirth) is sitting in his car out by the caravan where his favourite transgender sex worker lives. Except he doesn’t go inside. He drives off up to the woods, to the cabin, the bunker. He goes down in the bunker and slaps himself, repeating the AA-style mantra. Then he witnesses a tear in the wall, from nowhere. And through it drops a dead child, the eyes burned. Peter tries resuscitating him, though obviously to no avail. On the boy he finds an ID: Mads Nielsen. Oh, wow. Immediately, Peter called Tronte (Walter Kreye), who’s shocked to see his boy turn up, dead, after 33 years. Both men are bewildered, sure it’s “impossible.” Guess who else is down there? Claudia (Lisa Kreuzer), and she’s got lots to explain. First, they’ve got to dump the body where someone can find it.
Love how Dark often reinvents little bits and pieces of its story, showing us a more elaborate picture than we’d envisioned near the start. Even in this last episode, there are still surprises.

Poor Jonas (Louis Hofmann) is going through it, dreaming of Mikkel, unable to just let his time travel experience go. He’s definitely thinking about going back through the cave, however, it’s tough to tell exactly what he’s thinking of doing when he gets there. In the meantime, Martha (Lisa Vicari) apologises to Bartosz (Paul Lux) for being out of whack since her brother vanished, and they’re getting closer again after Jonas rejected her because of the messed up time travel family bloodlines.
Charlotte (Karoline Eichhorn) is looking for Helge (Hermann Beyer), he’s not at the home where he should be, but we already know that, right? Last we saw him he was watching himself in ’86 (Peter Schneider). The old man is still back in time.
Jonas has gone to talk with his grandmother Ines (Angela Winkler) about the “boy from the future.” She shows him the box, a similar letter to the one he’d already burned; the exact same one. Ah, those wormholes! Future and past become dislodged. Grandma thought that Mikkel aka young Michael was just “disturbed” and that his imagination was wildly overactive. Jonas is angry, wishing things were different. But can any of it change now? Can it ever go back to how it was before?

In ’53, Egon (Sebastian Hülk) has taken Ulrich (Oliver Masucci) into custody, after the latter believes he’s killed little Helge (Tom Phillipp), and everyone thinks he’s the one who killed the other two kids found on the construction site. Naturally, the cop from the future rambles, nobody believes him, and he’s tossed into a cell. This is bad. Real bad. And Ulrich’s not in a good headspace, either.
At school, Jonas runs into Bartosz. His buddy isn’t happy with him, after covering for him while he was in the psych ward after his dad killed himself. Bartosz knows everything after Martha told him, so the two friends fight it out in the rain like dogs before she shows up and scolds them both. I’m afraid that Jonas is getting pushed more and more towards wanting to try changing the past, and in turn the future.
The stranger (Andreas Pietschmann) goes to see H.G. Tannhaus (Christian Steyer) in ’86, finding the scientist working on his machine. Tannhaus shows him the smartphone he found all those years ago, it’s helped communicate with the machine and made him realise: “The future also influences the past.” All about those paradoxes. Seems the ’86 scientist needed people from the future to show him how to build the machine he’d already built. The stranger just wants to get the machine working again, so he can close that wormhole under the ground.
Charlotte knows that Helge, as a boy, was kidnapped; her husband confirms it was in 1953. This really spells out the 33-year cycle for her. And we know part of what happened to Helge then. Is it related to how Ulrich beat him near death and left him in the bunker?
Cut to ’86. Helge goes up to the cabin and stumbles onto himself as an old man. The older of the two warns that Noah (Mark Waschke) is using him. He tries convincing his younger self that the priest is “evil.” But it’s a bit much for the younger version of himself to handle.

Peter and Tronte are waiting in the bunker. Claudia’s been predicting things for them, they’ve all come true. Now, Tronte believes Mads will be alive again, after whatever’s about to happen happens.
In ’86, an increasingly reluctant Helge questions Noah about God, et cetera. The priest talks about being a boy, when a young man who seemed ready to die came to board at their house. He would hear him talk in his sleep about strange things. Years after he understood the man, his pain. And now pain is what leads both he and Helge in their experiments.
Who’s next on their list? None other than Jonas, who’s just gone through the caves again, back in time for another visit.
While Charlotte is looking into Helge’s incident as a boy, she comes upon a newspaper article on microfiche. There, she sees Ulrich in the paper, listed as the man responsible. Freaky. Ulrich, he’s still chained to the bed in his cell, and he’s being beaten mercilessly for the truth about the missing boy, the dead kids.
In ’86, Jonas gets to the hospital where Noah is sitting at Mikkel’s bedside. Helge’s waiting just behind him with chloroform. He wakes some time later in that wallpapered bunker room, the restraint chair in the middle, the bunk beds. The stranger is outside, too. The room’s above the Emerald Tablet door, when opened it releases energy inside that Noah tries harnessing for time travel.
Also, we finally know who the stranger is, after he explains that he is Jonas Kahnwald. He sent the letter to himself in 2019. He burned it. He got the other one from his grandmother. So on, and so on. Paradox upon paradox. He also can’t let the younger Jonas out of that room, or else he’ll never become himself 33 years later, skipping across space and time.

Helge is driving along the road where suddenly he’s t-boned by another vehicle brutally. He’s beaten up bad, though able to get out of the wreckage. In the other car is his older self, still trying to change the past, the future, all of it. Now the old man’s dead. Truly spooky moment.
And these moments are all recorded in the newspapers, which Charlotte, in 2019, keeps investigating. She also gets a text from Peter, asking her to come out to the cabin. Noah’s busy with Bartosz, explaining some of the paradoxes, how the older Jonas will destroy the wormhole but not entirely, that essentially he’ll be the one to help create it, as well. Seems as if Bartosz is his new apprentice after all these years.

“Time is an infinite field.
Millions and millions of interlocking wheels.”

Older Jonas crawls into the cave, opening the Emerald Tablet door. He heads in with the machine where he opens it up. With the smartphone’s help, the energy flows, the machine starts turning its various cogs. He sits, waiting for it to do its job.
Around Winden from 1953 to 1986 to 2019, the lights flicker. Above the trees a massive orb begins forming from the energy the machine puts out. Everybody watches, wondering when it will stop. Above the cave, in ’53, little bloody Helge cowers; in ’86, Jonas wonders what’s going on right below him, as a rift opens. Both Jonas and Helge see through time, into the same room across eras. They touch hands across the rift.
Then little Helge is in the room, as we saw him wake up before in an earlier episode. But where’s Jonas? He wakes up in the bunker much later, when the pictures and the web of information Claudia’s stuck up hangs on the wall. The old woman pretty much had it all figured out on her own. When he gets out, he finds that the nuclear power plant has exploded. The snow falling is likely part of a nuclear winter.
Did older Jonas trigger an explosion in 2019? Has anybody survived? If so, will Jonas have to go back in time to set things right again? Because currently he’s in a dystopian future. And a lot further in that just 2019. Want to be it’s 2052?
HOLY SHIT! 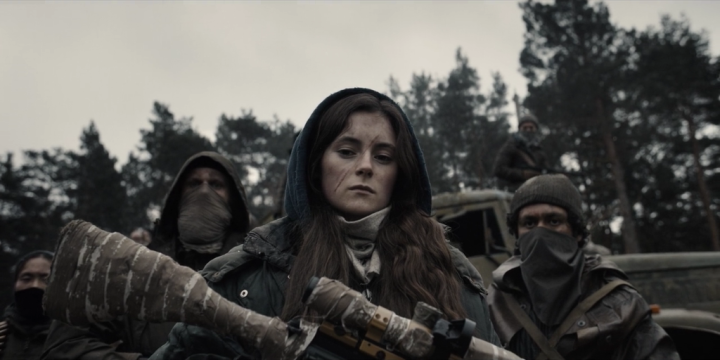 Wow, I mean, there’s nothing else to say: wow. This is my favourite TV series, ever. It took me a while to decide, but it’s definitely my favourite. I can’t get over how the time travel storylines, the characters, were all weaved together in such intricate fashion. Not once was I bored with an episode, which doesn’t happen often, even with some of the shows I love there are always duds. Dark is a masterpiece. Bless all the wonderful German actors and other artists involved; can’t forget director Baran bo Odar who crafted this so gorgeously.
Season 2 is coming. Soon.