Fox’s Gotham
Season 3, Episode 15: “How the Riddler Got His Name”
Directed by T.J. Scott
Written by Megan Mostyn-Brown

Edward Nygma (Cory Michael Smith) is moving on, after shooting Penguin (Robin Lord Taylor) and dumping him in the harbour. He’s out riddling, fucking with a professor in a chemistry department. He gets pissed when the guy doesn’t answer his riddle correctly, too. Seems he’s been taking out the “stars of Gotham,” all the intellectuals, so on. Seem that Ed is having troubles. He worries about what Oswald said, that without him there is no Nygma. So, our riddling maniac is seeking for identity. All the while causing chaos across the city.
Kathryn (Leslie Hendrix) is working on making 514A (David Mazouz) into a perfect Bruce Wayne (also David Mazouz). The experimental subject has the Wayne backstory down. This means, between Kathryn and Frank Gordon (James Remar), they’re setting into motion the rest of their plan. Part of which involves Dt. Jim Gordon (Ben McKenzie), who’s meant to cooperate, or else the Court of Owls will have other plans for him.

In the meantime, Ed is having visions, as usual. He’s seeing Penguin constantly, just as he did Ms. Kringle before. The two of them are going over and over his “killing spree.” What appears to be happening is Nygma wants a mentor, an intellectual equal of whom he can bounce his inane, insane riddles. He comes to the conclusion what’s needed is an enemy. And you guessed it – that man is Gordon.
“Ed, villains do not have teachers!”
At the GCPD, Lucius Fox (Chris Chalk) fills acting Captain Harvey Bullock (Donal Logue) in on some suspicions about the intellectual and artistic elite dying as of late. However, they’re still dealing with the aftermath of Jerome’s night of murder. While Dt. Gordon’s out, a singing telegram comes for him. The message all but confirms what Fox is talking about. Therefore, everyone’s playing the Riddler’s games now.
There’s a big chess tournament happening, the location of Ed’s latest games. He has a night of electric fright planned. His Penguin vision tries telling him to face himself, the truth. Instead, Nygma pops drugs to talk to Oswald, watching on as the GCPD arrive at the tournament which puts Fox directly in the path of the villain. Then people start blasting with shocks off their chairs.
Elsewhere, Frank meets with Jim, they talk about their family’s past. They also talk about regrets. The uncle tells his nephew he regrets what happened with him and his brother. He claims to have come back to Gotham to make amends. We know different. 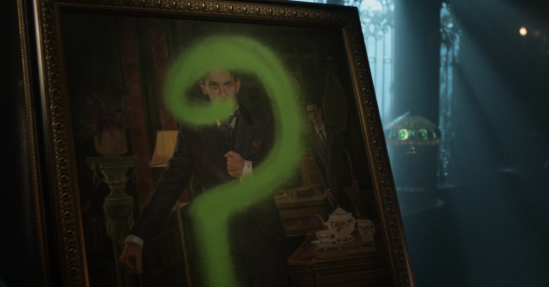 Fox heads the call from a disguised voice Nygma, who’s threatening deaths. He references the “belly of the beast” and leaves more clues, for the test he’s administering. The villain is hoping to introduce himself to Gotham, a coming out party for his alter-ego. Oh, yes!
In the woods, Frank takes Jim hunting, and he tells his nephew about the Court of Owls, the Five Families, the corruption of the court. Furthermore, Peter Gordon, Jim’s dad, was part of the court, supposedly. Now they are looking to make the son a member. Hmm. Doubtful. More like a nasty setup.
At Wayne Manor, Alfred (Sean Pertwee) is trying to advise Master Bruce not to let the relationship between him and Selina Kyle (Camren Bicondova) go to bits. The young pair aren’t doing so well, since the incident with her mother. The butler tells of a similar situation, him and a woman he cared about. It gradually prompts the young billionaire to reconsider his tactics.
The biggest problems are going on in Ed’s brain. He and Penguin, co-existing as one in his mind, is all but driving him insane. He believes he’ll be “born anew.” Yet it looks more as if he’s heading towards an even larger psychotic event than anything he’s done to date. He goes on down to where Bullock is about to address a bunch of cadets. Just prior to Harvey getting a call from Lucius to warn him somebody’s coming for him, he’s nabbed by Nygma. Uh oh. Afterwards, the Riddler gasses the whole audience. That’s some trouble. He proceeds to issue a challenge: Fox comes upstairs, they play a game “for the antidote.”

So, Lucius must answer three riddles. Each time he gets one wrong, Harvey – leaned over a railing, connected to ropes – comes closer to falling to his death. If he gets them right, even just one, everybody wakes away alive. First riddle? Wrong. A rope is cut. Second riddle? Wrong again. Another rope goes. Third riddle? Correct.
But the rope still snaps. Luckily, Lucius catches Harvey, and they’ve lived to see another day.
Frank is playing it up to Jim like he’s not longer a “true believer” in the Court of Owls, that he isn’t faithful to them anymore. He claims to his nephew that Peter was killed by them because he was making trouble for them. More and more, looks like Dt. Gordon is being led into a trap.
On the streets, Bruce faces hard rejection from Selina, and he faces further hard times from Sonny and his criminal buddies. Although he kicks ass pretty damn well. Problem is, the note earlier wasn’t from the Cat. In an alleyway, 514 attacks young Wayne, administering a drug. Gonna get incredibly interesting, as well as scary. Already he’s headed back to the mansion where he’s beginning to fool Alfred. Or, will the butler see through the act?
In his car, Lucius finds the hiding Nygma. The villain explains himself a little, after Fox gets to the root of things. He hears the whole sordid tale of Ed and Oz. Only question is, what’s next? Officially, the villain lets us know: “I‘m the Riddler.”

One interesting thing: Penguin is alive. He’s been saved from the river by Ivy Pepper (Maggie Geha). Still alive, still kicking. Surely ready to plot revenge. Y’know, places to go, people to kill. Typical Gotham villain shit.
In the shadows, Frank and Kathryn further discuss everything they’re trying to accomplish. And in a cell someplace, Bruce is being kept under lock and key – nowhere near Gotham, somewhere in the mountains high up. Wow.
Stellar episode. Love that we’re seeing the origins of villains in interesting ways that don’t just mimic what we’ve already seen in various adaptations.