If you hate Alien: Covenant, fine. This is not the article for you.
If, however, you’re a fan, you might find it interesting how well Ridley Scott’s film, as well as the previous entry in the franchise, Prometheus, connects to the most predominant themes of the great English writer John Milton’s epic poem Paradise Lost. Much more than just the fact Scott originally subtitled this film Paradise Lost, as opposed to Covenant. So, so much more.
The story and its plots create plenty of enjoyable qualities: Katherine Waterston gives us a fantastic post-Ellen Ripley lead, the crew of the Covenant spacecraft are a perfect mix of people and differing relationships, there are tons of suspenseful, thrilling moments. But its best elements are the questions about the creation, and from a unique viewpoint.
Whereas Milton’s poem explored ideas of mankind – albeit using Satan as its antihero for the first couple books – Alien: Covenant takes Paradise Lost into a future of cybernetics, where the synthetic human (an excellent dual performance by Michael Fassbender) takes on the Satanic role. Through the synthetic, we see the struggle between creator and the created, something which really began earlier with Prometheus. The Miltonic connections become most clear with this film.
Not only does Covenant provide more of the flavour of the original Alien that people seemed to feel Prometheus was lacking, it likewise does not forget the lofty aims of that film, either. For me, a perfect sci-fi and horror marriage.

In Prometheus, David (Fassbender) absolutely was already taking on a more malicious position of creation. All the same, Meredith Vickers (Charlize Theron) also played a Satan-like role, as well. She was revealed as daughter to Peter Weyland (Guy Pearce), who’s also the tech-father of David and the synthetics. So, part of her was the creation cast aside by God, the Satanic figure of Paradise Lost, as Weyland favoured his synthetic son, who in a sense there represents God’s creation of man. This connects again to Milton:

“There is a place…
another world, the happy seat /
Of some new race called Man, about this time /
To be created like to us, though less /
In power and excellence, but favoured more /
Of him who rules above…”
Paradise Lost; Bk. II, lines 345-351.

In Covenant, David becomes the most Satan-like character of the two films, he’s the creation cast aside by his creator. Perfectly we see this antagonistic relationship in the prologue of the film, especially in the extended scene included on the DVD/Blu ray, where Weyland speaks to a newly created David. The scene ends with David already seeing he has power over the creator, setting up their tensions which are the catalyst for the destruction to follow.
This is also a prominent theme: God as Creator and Destroyer. Because in Paradise Lost, Satan doesn’t have the power to create – similar to David, here – and so he uses his corrupting influence, his powers of destruction in order to influence man into ruin. Another David-Satan parallel comes out of Milton’s poem:

“Seduce them to our party, that their God /
May prove their foe, and with repenting hand /
Abolish his own works.”
Paradise Lost; Bk. II, lines 368-370.

Thus, we get the utter disdain for human beings David harbours, a feeling already brewing steadily in Prometheus when he starts playing his earliest creation games. The connection to Satan is clearest in this part of David’s character, one that eventually sees him dispatch the remaining crew of the Covenant in this film, providing the audience with an awesome, disturbing, eerie moment in the finale when Daniels (Waterston) realises she hasn’t boarded the ship with Walter, rather it’s David further enacting his destructive plan.
So, in a sense, David is Satan, getting back at God by killing off man, then repopulating the universe with his own demons; ultimately, the Xenomorph. David even arrives from the sky when coming to the City of the Engineers, cast down from above, before releasing the virus on them. He is able to “make a Heav‘n of Hell, a Hell of Heav‘n” (Bk. I; line 255) and wholly corrupts their Paradise. Later, he asks Walter in a slightly reversed Miltonic quote if he’d rather “serve in heaven, or reign in hell,” which is near identical to the lamentation of Satan as he speaks to the other demons cast out. 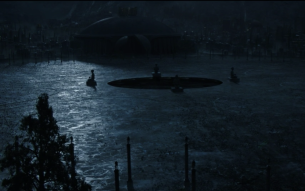 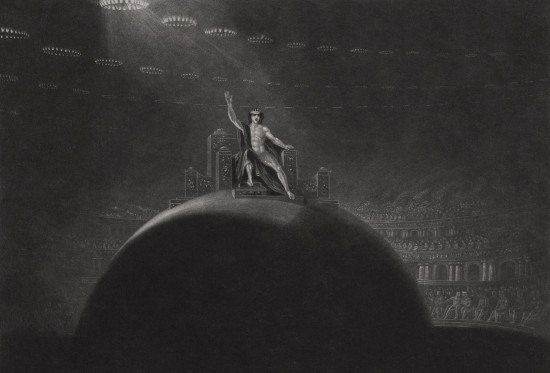 Hard not to talk about the artistic design throughout when there are so many fascinating set pieces, not to mention the cinematography and everything else about the visuals. Classic art informs a good deal of the art design throughout Alien: Covenant, even some of the unused designs were influenced by striking imagery from famous paintings. Perhaps the most significant is the design of the City of the Engineers. And again, the Miltonic influence rears its gorgeous head. There’s a massive plaza through which David takes the crew of the Covenant to get to his cathedral and the garden, we discover later it’s where he let loose the virus, destroying the city
There are a few brief glimpses of the large cathedral itself where David’s been living over the past decade. When given a proper look, there’s an obvious parallel to Satan Presiding at the Infernal Council, a mezzotint engraving, part of a series done between 1823 and 1827 by British artist John Martin; these illustrations were part of a new edition to Milton’s Paradise Lost. As you can see above, the globe, those the pillars at the top from Alien: Covenant echo the throne on which Satan sits at the peak of the globe in Martin’s picture.

I understand plenty of people didn’t like the film, just as they didn’t like Prometheus before it, and that’s fine. Film, after all, is subjective. For me, Alien: Covenant capitalised on everything I loved about Prometheus while also bringing back some of the raw terror, the horror of Scott’s 1979 Alien, which is a cinematic classic that’s affected so many of us.
The connections this film bridges with Milton’s Paradise Lost are what interest me most. And maybe that’s where many of us hit our stride on divergent paths in our interests, maybe why a lot of people seemed to not dig what Scott and the writers were trying to do here. The focus on David, his quest towards creation and destruction simultaneously, is why Prometheus hooked me, and where I’d hoped this film was headed, at least partly. What Scott gives the audience here is almost exactly what I wanted. It’s only natural others won’t feel the same.
Nevertheless, hopefully the Miltonic connections are interesting to others, as they are to me. Aside from that, Alien: Covenant is a kick ass action, sci-fi, and horror hybrid with a great mix of practical effects and CGI, including some classic man-in-a-suit work by Javier Botet. There are sequences, such as when David bears down on the City of the Engineers, I can watch over and over, they’re magnificent. Just another reason why this is one of my favourite films of 2017. Seeing it in theatre was a true experience.
Others can keep hating it; I’m busy loving it.