Full disclosure: Father Gore always liked the first Child’s Play, the sequel was okay, then afterwards not much interest. I’ve admittedly never watched past this third instalment in the franchise, because, though I dig Chucky, the movies were never up there in my favourites. Before I continue, let me just make clear that I’ll be diving into the rest of them pretty soon.
This is due to the fact that, despite general sentiment about how poor this entry in the series came off, Child’s Play 3 touches on things I’ve always thought were interesting about Chucky’s whole premise. Screenwriter Don Mancini – father of the redheaded Good Guy himself – doesn’t even dig this movie. Yet he expanded on the original concept of Chucky, as symbolic of the horrors of American consumerism, and all it affects in our society— most importantly, the minds of kids.
The plot starts when Andy (Justin Whalin) is a teenager, on his way to adulthood, after he’s been sent to a military college. He has to face leaving childhood and imagination behind, confront society’s will for youth to conform to the capitalist existence that is modern adulthood, and also deal with the pressures of toxic masculinity.
Or, it could just be a dumb slasher about a killer doll. Right?

The franchise is built on underlying anti-capitalist themes. Good Guys – in the context of Chucky, the anomaly – are symbolic. They’re poisonous consumerism forced onto children. Mancini famously got the idea when thinking about the Cabbage Patch Kids craze, how marketing sent people flocking to stores long before doors opened and started fists fights during Christmas+Black Friday. Seeing videos of Black Friday out of America is often horrifying, not funny, like watching a society die from the inside. Instead of parents killing each other to get the best toys for their kids, Chucky becomes the killer, and suddenly consumerism is literally killing children/their parents. Early on we get the fantastic line: “And what are children, after all, but consumer trainees?” Consumerism itself is just a form of societal control, many of which turn up throughout Child’s Play 3.
Having Andy go off to a military college is not insignificant. He’s readying his move into adulthood. The army, like capitalism, is another state apparatus meant to control the individual. Mancini’s screenplay becomes about all the ways in which a society exerts control on the individual— most specifically here, the young individual.
Masculinity is not always toxic, it’s just the toxic sort’s so damaging. Andy experiences this as he enters the military. His superiors push him to grow up and accept the adult world of bureaucracy, capitalism, and non-imagination. He’s told to “forget these fantasies of killer dolls,” and the idea that “dolls are for girls” is reinforced by the other army men.
What’s more, dolls are apparently bad toys for boys, too feminine. They’re replaced by the gun, again reinforcing ideas of toxic masculinity. The gun’s also symbolic of state control, of which the military is a massive part. Later, ironically, Chucky – for the 1st time in doll-form – uses a gun, subverting state control into a space of terrifying imagination.

Part of toxic masculinity is denial. This involves a denial of any perceived non-masculine ideas or urges, the denial of preference for anything deemed (too)feminine by society, the denial of imagination. This last denial is important to Child’s Play 3. The military – here, an extension of negative masculinities – sees imagination in boys/men as childish, and so it tries to reinforce a realistic view of the world, at the expense of mental freedom. Conformity is a forceful component of masculinity.
Whitehurst (Dean Jacobson) is more gentle, sensitive, and feminine than the rest of the guys in military college, and he’s constantly policing himself, like Foucault’s Panopticon built into him by a masculine world. At a certain point he sees Sgt. Botnick (Andrew Robinson) dead, just having been murdered by Chucky, who’s still there covered in blood. Whitehurst denies he saw anything, refusing to revert to his imagination that he’s been told isn’t masculine enough. He has “put away childish things.”
A significant part of the plot occurs when Andy goes with De Silva (Perrey Reeves) out into the woods, away from the college, and they come upon a view looking down over a carnival in the distance. We see the lights and the Ferris wheel, we hear the sounds of fun and enjoyment and YOUTH. Andy says: “I almost forgot there were places like that, where people just go to have fun.” When he sees the carnival and hears the sounds, he recalls the youthful qualities the military’s trying to beat out of him. Interesting it also takes De Silva – a strong woman in a predominantly male-dominated environment – to remind him, because she’s not indoctrinated into the cult of masculinity like young men. 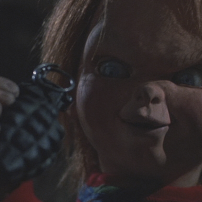 Child’s Play 3 is much better than its reputation, even if not considering all the wonderful themes Mancini – whether on purpose or inadvertent – jams into his screenplay. There’s some good gore and Chucky looks better than ever! But when it comes down to it, Mancini really does great work by exploring issues of anti-capitalism and toxic masculinity, all in the disguise of a slasher horror about a doll hacking people to pieces. That’s impressive.
It was all spawned by Mancini’s original interest in how advertising and marketing can turn regular people into vicious animals and consumerist zombies. Chucky’s a genius creation. With the added military plot, the movie illustrates the many ways society indoctrinates young people into capitalist thought by doing away with childhood, because childhood is representative of imagination— and once imagination is gone, the state can sell you anything.
Sure, it’s a lot of ambitious thinking for a movie most toss off as a lesser Chucky movie than the original or its first sequel. That doesn’t mean it’s wrong, either. People want to act like horror movies are only just now in the past few years gaining a sense of social/political(etc) thought, when in fact it’s always been a genre attuned to taking on big, heavy, symbolic issues, from the beginning of cinema itself. Even a slasher about a doll coming to life to kill and possess the souls of kids can take on a deeper meaning than merely a canvas for blood.