Always one to read deeply into a movie, Father Gore’s love of Intruder runs deep in and of itself. Why? A number of a reasons. Slashers are great on their own. Personally, I prefer if they’re either tongue in cheek or relentlessly brutal— Scott Spiegel does a fantastic job hovering on both ends of that spectrum. Any movie gets better when underlying themes help it transcend subject matter.

Intruder‘s effective due to the fact it’s one of the slasher sub-genre’s best offerings from the 1980s leaning towards capitalist critique. Funny, seeing the sub-genre has been used by plenty of studios for a quick buck. Spiegel uses setting to his advantage, placing the screenplay’s action in a local grocery store about to close up shop for good. Not only is it an interesting place for a slasher, by virtue of location the plot lends itself to hammering home a message.

What message, exactly? Capitalism kills us all, physically and mentally. It also confuses us as to where the biggest modern threats are coming from – convincing us the only dangers are those hiding in the dark – and numbing us to other danger like the bourgeois bosses unconcerned with the individual and focused solely on profits, among other things. We get all this thematic goodness combined with a heap of gruesome gore and expert cheese to boot! 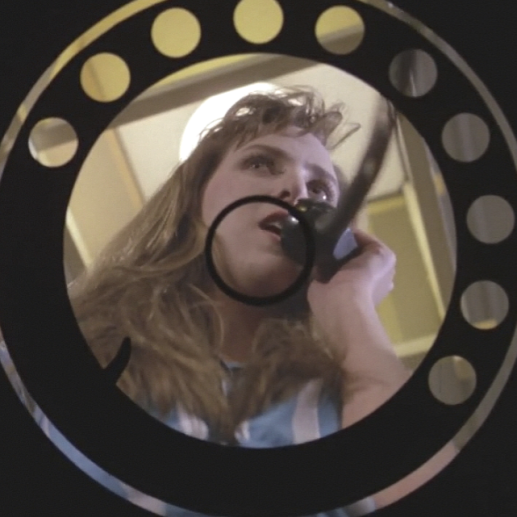 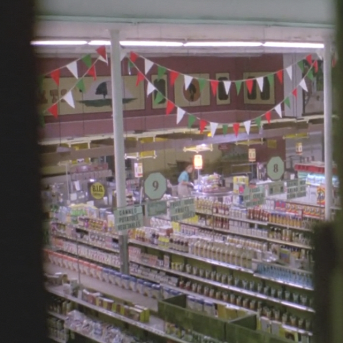 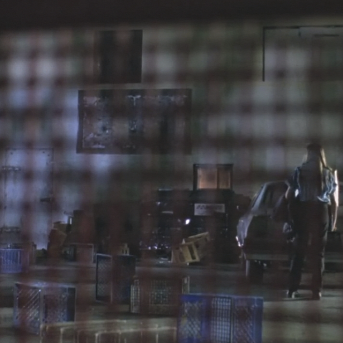 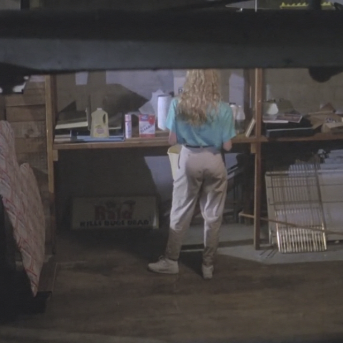 Part of capitalism, explicitly or implicitly, is a surveillance state. The owners of the modes of production need to be sure their employees are working all the time. Either the boss is always watching the proletariat, or, particularly nowadays, the cameras are watching. Spiegel gives the camera a sense of being the Panopticon, a roaming surveillance eye never allowing workers any privacy. The first of these shots is from inside the rotary dial of a phone, after the store staff decide they have to call the cops about a potentially violent intruder. As the intruder gets closer to the people in the store, the shots move to various areas: the cooler, behind the boss’s blinds, around corners, through grates. Spiegel’s use of a familiar slasher trope – the unseen killer – takes on new meaning when combined with the rest of the movie’s themes.

A local grocery store itself is a symbol. Here, the ruins of capitalism— a small business being forced to sell to the city instead of awaiting a slow, torturous economic death. The store and its employees are left in the wake of big box stores and franchises. In essence, the city’s reliance on a capitalist system have forced small business owners towards drastic measures, as is the case in real life. Intruder puts legitimate economic fate into slasher horror form, then uses it to tear apart unsuspecting victims.

“The store’s my whole life. I had to kill him.”

Spiegel impressively subverts notions of safety and comfort.
Take the idea of workplace safety— from the late ’80s onward, this has become more a concern with every passing year for businesses, particularly small ones who don’t have the same insurance benefits for their employees as bigger ones. Maybe the funniest part of the movie occurs when the camera lingers on a sign reading SAFETY FIRST – KNIVES ARE SHARP, PLEASE BE CAREFUL. A brief, ironic, and macabre moment wedged between scenes of a killer using knives to dispatch his victims.

Aside from the idea of workplace safety is a general sense of safety and comfort. At work, we expect a certain degree of safety, such as the locked doors of a store meant to keep danger from the exterior breaching the interior. The concept of interior v. exterior is obliterated here. Even the locked doors experience a moment of subversion when they’re sealed tight and our protagonist can’t manage to open them to escape the real threat, which was inside with her all along.

On top of that, the initial character we’re led to believe is the titular intruder actually winds up becoming, at least partly, a saviour. The capitalist/consumerist threat comes from within the store, not part of the tangible scary city imagined at night. The workplace itself is turned into a weapon against the working class by the bourgeois. Victims are murdered with a trash compactor, a bill spike, a knife from the produce department, an industrial grade meat cutter. A conveyor belt in back of the store is first seen as transport for a lazy worker, then reconstructed in a second scene as transport for murdered corpses like regular slabs of beef.
Spiegel constantly subverts expectations as to where the threat originates, too. As a society, we’re not routinely taught of the dangers inherent in capitalism, we’re indoctrinated to love and trust in it. So, when the workplace and elements of the city are used how Intruder pictures them, we break out of our economic brainwashing with every slice, slash, and drop of blood.

“I’m just crazy about this store!”

Spiegel’s Intruder, just as a slasher movie, is good, nasty fun! No doubt it should be more well known. A diamond in a pile of mediocre-to-bad entries amongst the sub-genre. When you throw in all the stabs at capitalism, there’s even more to enjoy. Everything we know about the workplace is turned against us, used as either weaponry or a device to carry forward the socioeconomic themes in the screenplay. Never has going to work been so terrifying.

The end of the movie really puts the nail in the coffin, when those in control of the means of production are the ones believed and trusted by the state/state power (i.e. cops). We see a fundamental distrust in the state and its various arms for the working class. Ultimately, the proletariat are blamed, and the bourgeois are allowed to continue their reign of terror.

Of course, you don’t have to take it ALL so seriously. This movie works fine on its own, as an amusing heap of slasher jump scares, wild practical makeup effects, and a not yet overused setting for deliciously brutal horror. Don’t feel like these types of readings are the only way a story can be interpreted, only Father Gore’s humble opinion.
There’s no denying you can pull a lot out of Intruder, blood, guts, or otherwise.