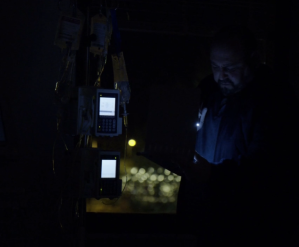 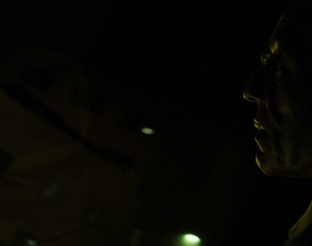 Hector Salamanca (Mark Margolis) is laid up in the hospital after his stroke. In his dark room at night, a couple men check on his condition for Gus Fring (Giancarlo Esposito). There’s “no way of knowing” whether the man will wake up and be fine, or what will happen. The uncertainty doesn’t thrill Gustavo: “I decide what he deserves. No one else.” We’ve already seen the reasons why Gus and Hector have such bad history, through the flashback events seen in Breaking Bad.
At home, Jimmy McGill (Bob Odenkirk) is up early making breakfast for Kim Wexler (Rhea Seehorn), then supposedly going for some job interviews. He’s not looking for any downtime. Perhaps too much time without work will leave Jimmy with nothing but his conscience to face.
What about Nacho (Michael Mando)? He and his father Manuel (Juan Carlos Cantu) aren’t seeing eye to eye, not after everything that’s happened. Dad knows the type of business with which his son is caught up, the type of people, and he doesn’t approve. He’s likely seen others sucked in by the cartel over the years. Now it’s his own son.
At one company, Jimmy goes for an interview as a copier salesman. He impresses with some of his know-how from back in the day in the mailroom. Then the interviewees ask about his career as a lawyer, which Mr. McGill spills into a pitch for himself as a salesman. He employs all his powers to get the job, convincing them to hire him on the spot. Except Jimmy flips out on them: “I could be a serial killer, I could be a guy who pees in your coffee pot! I could be both!” He only did it as a way of exerting some kind of power, a strange way of reconciling his grief? Who knows.

Mike Ehrmantraut (Jonathan Banks) gets a call for a meet. He heads to an interesting place to sit and chat with the ever paranoid Lydia Rodarte-Quayle (Laura Fraser). She wants to know why he did his little song and dance at the warehouse. It’s all part of his cover, to make it look better. She wants to keep it a paper trail, not quite understanding Mike wants to put a “face to the cheque.” Plus, their security is terribly lacking, as he so easily proved.
Dr. Brechner (Poorna Jagannathan) is brought in from John Hopkins, at the same hospital where Hector’s lying in bed post-stroke. His nephews Marco (Luis Moncada) and Leonel (Daniel Moncada) are by his side, too. The doc wants to try some new techniques in order to hopefully heal their uncle. This particularly makes Nacho nervous, depending on the ultimate outcome.
At Los Pollos Hermanos, Gus gets contacted by Lydia, worrying over Mike. The man tells her to just get him a badge, that he’s trustworthy. Meanwhile, he’s got a visitor: Tyrus (Ray Campbell), who’s been keeping an eye on Salamanca. He’s brought medical records, as well. These interest him a great deal.

At HHM, Kim meets with Howard Hamlin (Patrick Fabian) about Chuck’s estate. She’s there on Jimmy’s behalf. Chuck’s ex Rebecca (Ann Cusack) has been left the house. Everything else is up to Jimmy, which he refuses by proxy through Kim. All that’s left is an “agreement letter” and “$5,000,” along with a personal letter. Kim knows Jimmy was cut out of the will, compensated with a bit of pay-off cash. She’s also very pissed with Howard for talking about suicide with Jimmy, as if it to lay blame at his doorstep. She absolutely fucking unloads on him about the fake fairness of it all. It’s sad because she’s the sole person who really cares about Jimmy genuinely— even Chuck didn’t really care in the end, either. An impressive scene from Ms. Seehorn, also real emotional.
Later that night, Jimmy calls up Mike for the first time in ages offering “a job.” He’s got something in mind. But what, exactly? Elsewhere, Arturo (Vincent Fuentes) and Nacho are meeting with Victor (Jeremiah Bitsui) and Tyrus. There’s a bit of a turf war going down between the two groups. Gets nasty when Nacho pulls out a gun, though Victor and Tyrus comply. This won’t go unanswered. It isn’t long after the guys are outside, Victor and Tyrus ambush them, suffocating Arturo to death in front of Nacho on his knees. Gus has arrived. He lets Nacho know he knows what’s happened, but the Salamancas don’t yet.

Better Call Saul, for me, is better than Breaking Bad. There was a lot of character development in that series. But here, there’s something even more incredible about watching a character we already know unfold. Bob Odenkirk plays the character perfectly. “Something Beautiful” is next time.