A funeral is underway to put Rev. Deaver to rest. Henry (André Holland) is present to watch. He also sees two men watching from a distance— two men he’s seen before, Odin Branch (Charles Jones) and a man called Willie (Rory Culkin).
Meanwhile, the kid (Bill Skarsgård) is looking through the reverend’s old things, including many tapes of his sermons, as well as videotapes of him and young Henry in the woods, and so on. He’s been hanging out with Alan Pangborn (Scott Glenn). They’re trying to figure out ways to help Ruth (Sissy Spacek). Naturally, the young man’s cryptic about how he’ll help. “Time is her enemy,” is all he’ll say for now.
After an appointment with the doctor, Ruth heads home while Alan goes off to do who knows whatever else. She then opens up her chess set. She puts one of the figurines in her pocket, picking up another one. Let’s hope she’s not going to pull a Virginia Woolf.

We see Henry’s son Wendell (Chosen Jacobs) turn up in Castle Rock to spend time with his father. There’s a divide, obviously, seeing as how Henry doesn’t get to see his boy as much as he’d like to, and consequently Wendell doesn’t see grandma much either. It’s a nice reunion, specifically for grandma. But there’s something deeply wrong with grandma, as well.
Henry finds his client out back watching old home movies, seeing old images of himself out in the woods with dad. There’s clearly bad memories connected to his father, all the time they spent together, but so much mystery keeps it shrouded. I’m curious as to what Ruth knows. Unfortunately her memories are all mixed together.
At Juniper Hill Psychiatric Hospital, Henry brings the kid over to check him in, hoping he’ll get good care. Immediately, for “the second time this week,” a crow takes a nosedive into the pavement nearby. There’s probably going to be more of that, if not worse, in the coming days.
That night, Henry asks his mother about what he and his father would do in the woods. He questions whether there was “a sound” his dad heard out there. Although Ruth doesn’t know, she acts strangely. There’s so much hidden in her, and it may never fully come out. Nevertheless, Henry continues remembering his time in the woods with dad, trying to hear the supposed noise— and what was it, truly? That forest is very unsettling. He soon goes to see Molly Strand (Melanie Lynskey), asking if she saw him and his father leaving for the woods at odd times. She confirms. She also confirms technically being there in the woods when he went missing, by way of her empath emotional connection. She says she felt Henry feel a relief about his father. Molly believes Henry “wanted him dead.” Then, she reveals pulling the plug on Rev. Deaver, claiming it was like Henry was doing it with her. Holy shit.

Left together at home, Ruth and Wendell have a conversation about the cyclical nature of time. She believes time is no longer linear, but that it moves around in various ways. She’s pretty lucid at the moment. She also explains the chess pieces, why she’d been moving them. It wasn’t a Woolf suicide attempt she was planning, rather it’s a way of connecting herself to the present, to the now. Like leaving a trail of breadcrumbs, the way Hansel and Gretel did in the woods.
Speaking of woods, Henry takes the video camera and tape out there, following the path he and his father once took through the trees. Eventually the camera goes dead and he loses the trail.
Pangborn’s in a junkyard looking through old car wrecks. Is he searching for the car Warden Lacy killed himself inside? Yes, sir. He happens to hear a news report in his truck about Juniper Hill, where a fire broke out and a bunch of people were killed. Afterwards he takes Lacy’s junk car by force with a gun.
Ruth receives a guest at home. The young man’s returned from the psychiatric hospital. He takes off his sweater and shoes as if he lives there, like he’s done it a million times. Could it be he’s somehow embodied Rev. Deaver? Ruth already thought she saw her dead husband before when the kid turned up outside the window. Hmm.
In the woods, Henry comes across the mysterious Odin and Willie. We come to understand Mr. Branch is deaf, so Willie helps interpret. Henry starts asking questions. Odin tells him he knew the reverend before he died. It’s suggested the deaf man knows about the rev’s obsession with “acoustics” and other things. The rev believed the sound out there was the “voice of God.” Odin has his own beliefs: “Other heres, other nows. All possible pasts, all possible presents.” Not too unlike Ruth’s ideas about non-linear time. Moreover, Rev. Deaver was trying to develop some kind of device – “the filter” – meant to be similar to the schematics Noah was given for his ark by God. When he didn’t finish it, Mr. Branch did.

Inside their camper, Willie and Odin show Henry a room, built with soundproofing to the extreme. This is a place where “total silence” reigns. It’s meant to block all the world’s noise out so that a person can hear the “schisma” of whatever noise is calling out to Castle Rock. Odin wants Henry to step into the chamber, knowing he is struggling with all the mysteries of home and his father, though the latter refuses. There’s danger, though. Odin reveals he rendered himself deaf to hear the schisma, same as he’ll do to Willie. They also lock Henry inside the chamber, where the sound takes over everything. He flashes back to his father’s voice in the forest. He sees visions. And it almost drives him totally insane.
Back home, Pangborn finds the kid covered in blood. Inside the house, the vinyl on the record player continually skips, the kitchen is soaked in blood, but where’s Ruth? Is she even still alive? Was this all a way for the kid to find revenge? 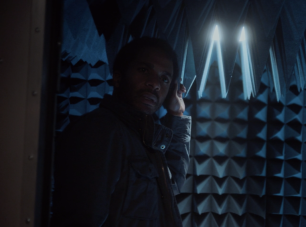 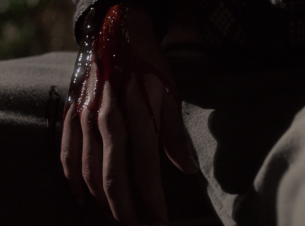 What an episode! This series has been amazing and eerie, every single step of the way. Can’t wait for more. The ending leaves us on a decent cliffhanger. “The Queen” is next time, should be a wild one, too.