We witness a dream. Detective Harry Ambrose (Bill Pullman) is in a motel room, like the one where the recent crime occurred. A young Harry (Brady Jenness) comes inside, calling to his mother. On the ground, the body looks like that of Bess— Harry himself is placing the stones over her eyes. Then, he wakes up. He and Jack Novack (Tracy Letts) each experience a little insomnia, having a cup of coffee together in the middle of the night. Jack knows it’s “not exactly fun” for his old pal to be back home, urging that if he feels he needs to leave then it’s okay to do so. Harry’s friend obviously knows at least part of his personal, tragic history.
At the diner, Harry and Detective Heather Novack (Natalie Paul) talk about the “rock from the barn.” She mentions it reminded her of “Stonehenge.” The whole thing doesn’t exactly make anything any easier. The older detective knows something at Mosswood Grove isn’t right, whereas the younger’s so unsure. It’s only because Heather has a personal connection to the place, a sad piece of her history involving Marin (Hannah Gross), who disappeared after coming into contact with the cult.
Suddenly, Dt. Ambrose gets an angry call from Vera Walker (Carrie Coon), telling him Julian (Elisha Henig) is being tried as an adult in “criminal court.” Things are getting extremely serious. And the kid’s totally unsettled by being swept up in an adult world. Ambrose rushes to the home where the kid’s currently being arrested, trying to give him advice and leaving him a phone number where the boy can reach him. It’s terrifying to see Julian even in a juvenile wing, where everybody is so much older, so much bigger. It’s wildly dangerous, and indicative of things that happen in the real world all the time, at least in America. The reality: Julian might do “anywhere from fifteen to life.”

Dt. Novack goes to see Mrs. Calhoun, Marin’s mother. Their relationship isn’t what you’d call, easy. Mom pretty much resents Heather, and she obviously knew about the lesbian relationship. A couple calls came in over the years from Mosswood Grove, though the mother never actually spoke to her daughter. We see Mrs. Calhoun isn’t broke up over Marin, at least not at this point. She’s cold. But she offers a box of things her daughter left behind for Heather to look through.
There are so many mysteries. Dt. Ambrose tries to figure out why Vera would make up the story about Niagara Falls. If Adam and Bess were actually trying to abduct her child, why wouldn’t she call the police? Sure, the cops treated their group like a cult— would they actually ignore a missing child report? Doubtful. Southern towns are always thinking of the children, sometimes to absurd lengths. There’s something strange about Mosswood, one way or another. Vera goes back to the grounds where she does a weird kind of tantric prayer to the giant rock, along with what she used on Julian as therapy— sounds similar to a womb-like heartbeat. Also, the massive rock kind of looks like a face in the dark, no?
We see a flashback of Heather and Marin, after the latter got back from her adventure at the Grove. She ranted and raved about the place, wanting her girlfriend to take part in the place with her. Heather was reluctant, not wanting any part of it. The memories weigh heavy on her in the present.

Jack takes Harry to a get together, where a bunch of Keller locals are drinking, eating, and carrying on together. Chief Tom Lidell (Jay O. Sanders) is there, too. He brings up the nasty fire at his mom’s old house in town. Harry passes it off, yet the conversation turns incredibly awkward. Later, Dt. Ambrose runs into Caroline, a flame from the past. She knows the inner pain of his youth to some degree. Through the visions Harry sees, it appears he may have lit the fire. Maybe it’s why he clings to believing there’s more to why Julian would’ve killed Adam and Bess.
Mom goes to jail to see her boy. He isn’t well, having been thrown from a boy’s world to a man’s world. He’s surviving. His mother keeps pushing, telling him not to reveal anything else to outsiders, and especially not to the “detective with the beard.” All the same, young Julian doesn’t want to hide the truth. He refuses to lie about his upbringing at the commune when the prison psychiatrist speaks to him.
Another Heather and Marin flashback, after the latter has a bad fight with her mother. It’s clear Ms. Calhoun never liked her daughter, so it’s no surprise she doesn’t care down the road. Heather was there for Marin, taking her home to protect her from the awful things her mother says and does. They had a deep relationship. So, what happened after these kind, caring moments? In the present, Heather looks through Marin’s things, and in a book called Dolphin Beach she finds the name Julian underlined and circled, over and over. Whoa. That’s creepy. Perhaps Marin found out things she never should’ve known? The Sinner thrives on continuous, multiple mysteries. Dig it.

Julian is going through a tough time, telling the psychiatrist about when Adam and Bess died. He tells her it “wasn‘t supposed to hurt.” He remembers watching her die on the motel room’s floor. We hear the sound of that womb-like heartbeat, or drum, whatever it is, and I’m getting curiously paranoid: could Vera have tried hypnotising her boy to kill the couple? Nah. Too far fetched. Either way, Julian goes wild on the psychiatrist, freaking out. Thus, the session ends.
Oh, and Heather turns up to tell Ambrose that Vera’s “not the mother.” Dt. Novack believes Julian is the son of Marin. The kid was born nine months after Marin came out of Mosswood, and she’s not been seen in a decade. Another question arises: who’s the boy’s father?
The detectives track down a Dr. Poole, who signed the certificates after Julian’s birth. He wasn’t present for the birth, he was only contacted later for the appropriate forms. They show the doc a picture of Marin, whom he doesn’t recognise. However, Dr. Poole’s hiding secrets. Soon as he can he sneaks off under their noses.
They go inside further to look for the doctor. They head up into the attached house, finding no sign of him. When they get upstairs, Dts. Ambrose and Novack discover Dr. Poole’s stabbed himself in the neck with a scalpel, blood gushing everywhere. Whatever secrets he was holding onto are headed for the grave. In the subsequent search of the house, Ambrose stumbles onto a room in the attic, where there’s another, smaller stone, just like the one in the barn at Mosswood. So the mysteries thicken again. 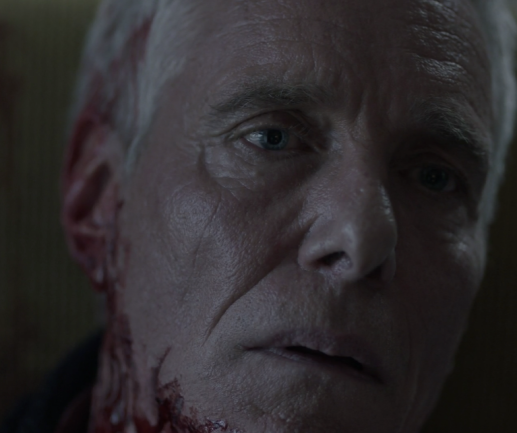 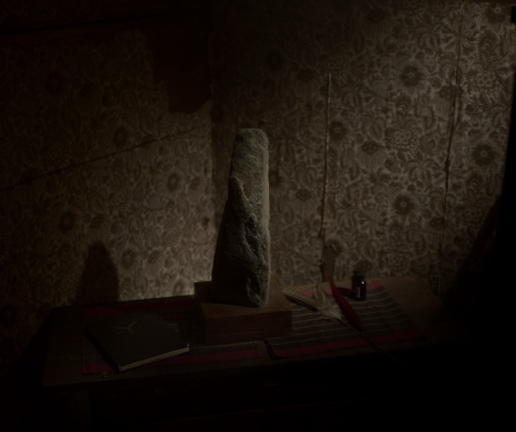 The Sinner is an important show. The way it dissects horrible crimes, looking at what’s in the past that could’ve influenced the present, searching back to the root, it presents victimhood in the appropriate light it needs to be understood at certain times. Some crimes are clear cut. Others require us tracing issues to their origins, because not all people who commit crimes are bad people. It’s also just a damn good crime-thriller steeped in weird mystery.
Part IV is next time.