In the aftermath of Mexico, Jesse (Aaron Paul) gets Gus (Giancarlo Esposito) and Mike (Jonathan Bank) to an expert team of surgeons on the meth payroll. Their first concern is for Mr. Fring, and Mike’s left by the wayside for the time being. Both men are in rough shape.
At the lab, Walt (Bryan Cranston) cooks while being watched over by Tyrus (Ray Campbell), concerned about where his partner’s gone. Tyrus says nothing, he just double checks the batch count. He’s further concerned about Hank (Dean Norris) insisting on going out to the next location in his quest. Soon, the brothers-in-law are watching the chicken farm from binoculars in Walt’s vehicle. Hank mentions “rumblings about some big play down South” involving “lots of bodies.” This furthers the chemist’s worries for Pinkman.
In the makeshift ER, Jesse watches Mike recover in bed. He sees there’s lots of blood on hand. They’ve actually got his blood, too. Some for everyone! This is a vast, well prepared organisation from top to bottom. Gus has a plan for everything, given he’s got a multi-billion dollar empire on his hands. Mike has to stay another week while Gus and Jesse are going to have to walk the rest of their journey across the border. The boss is happy they “proved a point,” being the young cook can run the lab by himself. Jesse won’t agree to seeing Mr. White be killed. 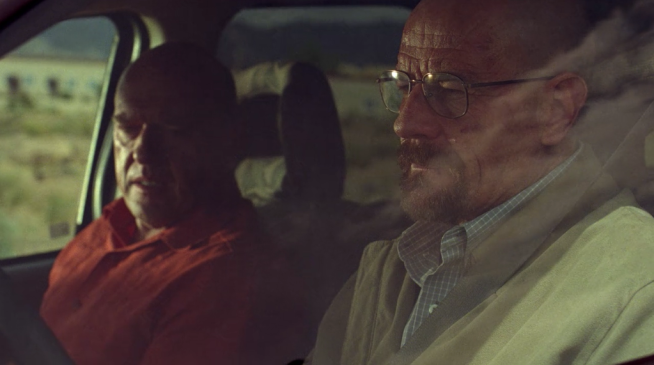 Skyler (Anna Gunn) gets a message from Ted (Christopher Cousins) about the IRS situation, saying he’s not going to be paying the bill. Great. This is going to push her towards something worse if he isn’t careful. She’ll protect her family at any cost. She’s told Ted about the gambling story, using that as a way to force him into paying the IRS. Still, nothing works. Ted won’t pay with “illicit gambling winnings,” but she takes it as him trying to blackmail her into giving him more cash. Big fucking trouble. This puts her on the line to Saul Goodman (Bob Odenkirk) to discuss options.
In the nursing home, Hector ‘Tio’ Salamanca (Mark Margolis) sits in his chair watching TV. He gets a visit from his old pal Gus, who’s come with a surprise— the chain from around Don Eladio’s dead neck. Fring tells him they’re “all dead,” including his last remaining family member, a grandson, whom Jesse shot during their Mexico escape. Nasty stuff. But such is revenge sometimes.
Walt and Hank go for another road trip. They’re not going to the chicken farm this time. They’re headed for the industrial laundromat owned by Madrigal situated right above the meth lab. All of a sudden, Walt’s in a tough position as he hears more of the evidence coming out from Hank. On the way he decides to swerve into oncoming traffic so they don’t make it out to the laundromat, nearly putting his brother-in-law in fatal danger. Jesus. Walt’s got to act like “Mr. Magoo” afterwards so it looks like he only made a dumb mistake. This ends the “Hardy Boys routine.” No more investigatory work for Walt, especially with Hank getting a car for disabled drivers. 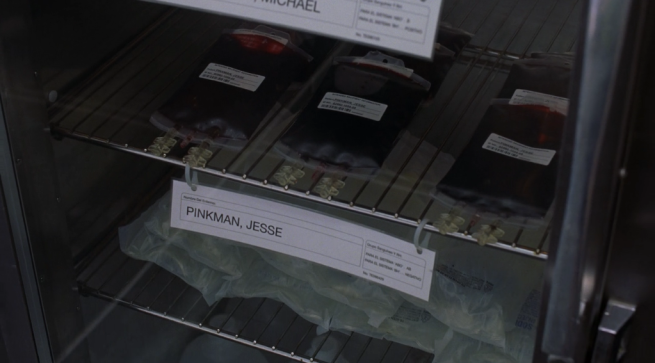 Ted gets called upon by Kuby (Bill Burr) and Huell (Lavell Crawford) at his house. The two men have arrived to get the situation with the IRS solved. It’s not meant to be a big deal, they merely have to get Ted to write a cheque, then everything’s all finished. Instead Ted tries making a run for it. Only he slips on his pesky carpet, taking a strange fall.
At the lab, Walt suspects someone else cooked during his absence. He’s given no answers, though he’s smart enough to begin figuring out what’s happening behind his back. He goes looking for Jesse, finding him with Andrea (Emily Rios) and her son Brock playing video games. Pinkman’s not pleased to see him there again, neither does he want to help his partner anymore. After that, Tyrus turns up to cattle prod the chemist, then he and another man take him away.
In the desert, Walt comes to with a bag on his head. He’s been brought to meet Gus. The meth boss explains to the chemist he’s “fired.” He orders Walt to stay away from the laundromat, as well as Jesse. This prompts defiance from Walt, who refuses to lie down for anybody and knows Pinkman won’t cook if he winds up dead. Gus suggests he’ll be dealing with Hank permanently, too. And if there’s any issues? He’ll kill everybody Walt loves: “I will kill your infant daughter.” That’s cold. 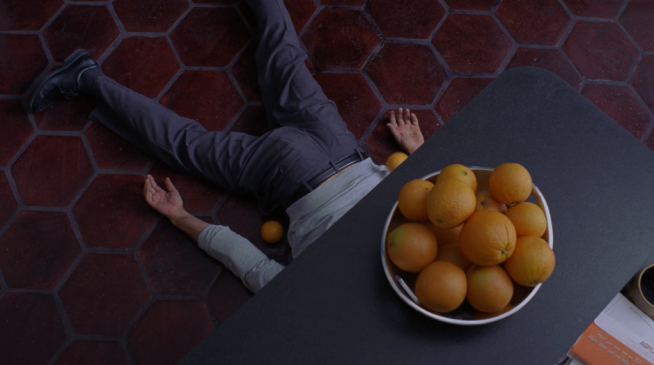 What will Mr. White do? He goes right to Saul, believing it’s time to disappear forever. This means it’s End Times procedure— no coming back! He’ll go into hiding rather than see the fallout of things with Gus. No matter if it costs a couple million dollars. It’s either that or, y’know, die.
So, Walt goes right home for the crawl space. He heads down to find his cash, only to discover a massive amount gone. He doesn’t yet know about the Ted/IRS situation, Skyler hasn’t told him. All he can do is lie down there laughing, worried he and his family are about to be brutally murdered. One of the most intense scenes of Breaking Bad, from writing to sound design to acting. Impeccable dramatic tension!
Where do they go from here? Even the DEA is on alert about the cartel coming for Hank. Things are breaking down, faster and faster. Walt’s laughter at the end is so chilling. 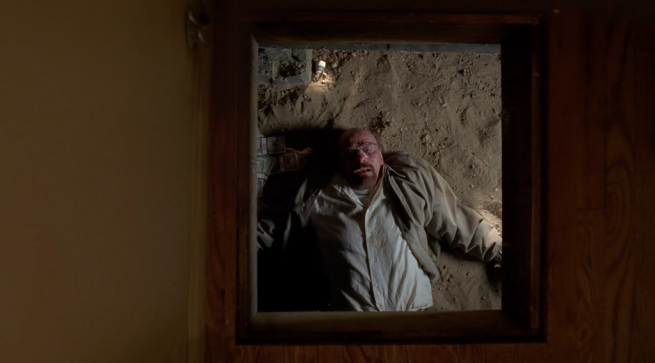 Just all around stellar. Major TV right here, as usual. The series is full of amazing stuff, but episodes like this seal the deal— one of the greatest shows TV will ever have to offer. “End Times” is next, perfectly named.