At Madrigal, Peter Schuler (Norbert Weisser) tests dipping sauces. He’s almost robotic. Then he receives word police are there to see him. Los Pollos Hermanos is being removed from the wall of Madrigal’s proud businesses. Schuler takes his time going back to the office, where the cops are waiting, curiously eyeing a photo of Schuler with Gus Fring on the golf course. So, what’s Schuler to do? He takes the emergency defibrillator from the wall, heads for the bathroom, and shocks himself to death on the toilet.
Jesse Pinkman (Aaron Paul) is still concerned over the ricin cigarette while Walter White (Bryan Cranston) tries to ensure him it probably burned up in the lab. It’s constantly on Jesse’s mind, he can’t let it go. This pushes Walt to make a new ricin cigarette. He plans to plant it in his partner’s home, pretend like they find it while searching the place. And the old ricin vial gets taped to the inside of an outlet at the White residence, for potential later use.
They search everywhere in Pinkman’s house. Walt plays along with his pal for an appropriate length of time until he decides it’s time to stash the cigarette and let Jesse find it. Walt convinces Jesse to check the Roomba, and there’s the ricin. This leaves the latter with even more guilt, believing he lost his mind and nearly killed the former over nothing. Everything Mr. White does reflects in the further deterioration of Jesse. 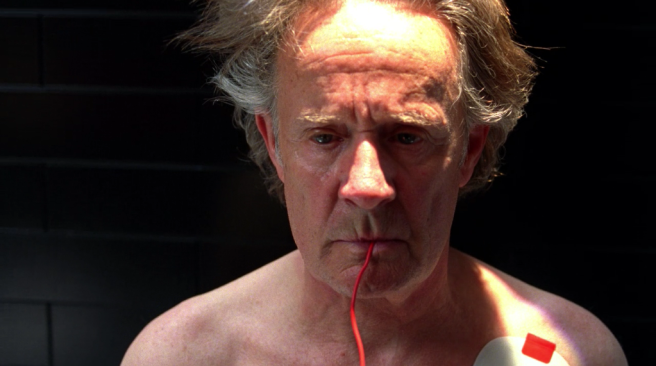 At home, Mike Ehrmantraut (Jonathan Banks) kicks back with a beer watching movies and resting from his wounds in Mexico. Soon he gets a visit from Jesse and Walt, who want to “talk partnership” and “cooking again.” They want Mike to help get the new meth business up and running. They’re refused almost immediately. He’s got no love for Walt or his tactics: “You are a time bomb, tick tick ticking.”
The DEA are visited by German colleagues of Mr. Schuler. Herr Herzog (Wolf Muser), whose family owns Madrigal, has come to speak with the agents about what’s happened. The company, of course, wants to help any way they can, unaware of the illegal activities taking place under its name. Meanwhile, the DEA are out of evidence from Fring’s laptop, and they’re still trying to piece together who gave Salamanca the bomb to kill Gus. ASAC George Merkert (Michael Shamus Wiles) is taking the fall for everything, seeing as how the chicken man was so close to them. It’s also ironic because Hank’s (Dean Norris) in the same position, a criminal sitting right under his nose and he can’t even see it. Tragic.
In a diner, Mike sits reading a paper. Behind him sits Lydia Rodarte-Quayle (Laura Fraser), one of Madrigal’s people. She’s there to meet Mike, trying to be incognito. He has no time for her weird shit. She brings him a list “of eleven names.” These are people who could bring everyone down, herself and Mr. Ehrmantraut included. She suspects they’ll all fold when the police turn up. She suggests permanent action, but he assures they’re all “well compensated” for these types of situations.
Mike has to go speak with Hank and Steve Gomez (Steven Michael Quezada). They ask about his position at Los Pollos Hermanos doing “corporate security,” which he tells them involves loss prevention and employee background checks. They want to know about his concealed carry permits, his private investigating license, and his time as a cop in Philadelphia. Apparently Mike finished off his police career with a few troubles. The agents claim a witness puts him in the meth lab, so the old guy offers himself up for the cuffs, knowing they’re merely trying to break him. They do know about $2-million in an offshore account under his granddaughter’s name, and they’ve got the eleven-name list, too. 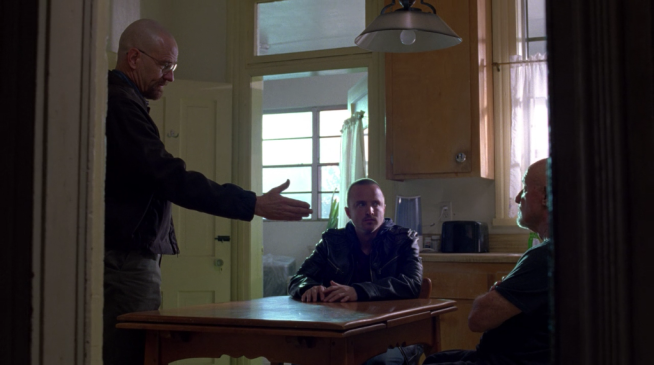 Over with Saul Goodman (Bob Odenkirk) we find Jesse and Walt brainstorming new places to cook meth. They don’t want to go too far outside town like before, neither does the chemist want another roaming lab like the Winnebago, a.k.a “the Crystal Ship” as Pinkman dubs it. Plus, they’re also looking to find methylamine. On top of it all, the lawyer’s trying to convince his clients not to push things. But Walt’s broke, and this puts him in a position where he’s unwilling to stop while there’s “gold in the streets” waiting for them.
There are problems already for Mike with the list of names. He gets a call from businessman Chow (James Ning), owner of the chemical warehouse, and the man wants to talk. It isn’t a legal thing, either. He’s held at gunpoint by a man with a silenced pistol. Mike goes to see Chow, but knowing something isn’t right he gets the drop on his would-be assassin. This was Ms. Rodarte-Quayle thinking she could clean up the situation her own way, offering “$10,000 a name.” Looks like Mike’s got to start cleaning instead.
Afterwards, Mike goes to Lydia’s home where he holds her at the end of his gun. She asks not to be shot in the face. However, he lets her know: “Nobody‘s going to find you, Lydia.” She’s headed for a disappearance. Except Mike can’t bring himself to orphan a young girl, deciding he’ll use Lydia to get some methylamine. They come to an agreement, and later Mike phones Walt to make a deal. It’s only desperation pushing Mike after finding out the government will take everything meant to go to his granddaughter. And nothing good ever comes of desperation— not in the drug world, anyway.

This is one of my favourite episodes of the series. Seeing the total fallout from Gus and his business is compelling, as there’s this huge world behind the one we know in Breaking Bad. Instead of a ton of exposition, we’re given a great chapter like this to unravel some of the inner workings of the massive business.
Season 5’s well underway!
“Hazard Pay” is next time.