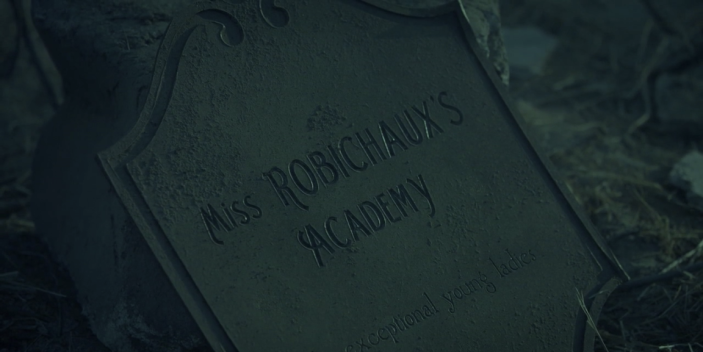 We begin with Cordelia Goode (Sarah Paulson) wake up in rubble. She’s at Miss Robichaux’s Academy for Exceptional Young Ladies. She calls out to everyone, seeing only corpses littered across the wasted landscape. She tries using her powers when radiated people come out of the fog to eat her alive. Michael Langdon (Cody Fern) stands nearby laughing like the Grim Reaper.
This is a premonition. Cordelia actually wakes to Myrtle Snow (Frances Conroy) and Zoe Benson (Taissa Farmiga) comforting her, along with Madison Montgomery (Emma Roberts) and Queenie (Gabourey Sidibe), who’ve just returned.
Cordelia goes to see the warlock council— Ariel Augustus (Jon Jon Briones), Behold Chablis (Billy Porter), John Henry Moore (Cheyenne Jackson), and Baldwin Pennypacker (BD Wong). She’s fixated the undercover Antichrist. The Supreme tells them of her vision of a “terrifying future” and the laughing man she saw. She feels it’s her duty to prevent an apocalyptic event, then offers for Michael to take the “Seven Wonders,” which doesn’t please Myrtle. But Cordelia’s not budging on this one. It could “change everything.”
People keep wondering about the final scene in 2022 from Hotel, and how it’ll work with this apocalypse of this season in 2021. Father Gore guesses something here amongst the warlocks and witches will reverse the apocalypse, somehow. Either way, we’re headed for interesting territory.

Back at the Academy, Myrtle rages at Cordelia for letting a man take the sacred test. She doesn’t like men being leaders, given we’ve had them since time immemorial and the world’s fucked. She name drops everyone from Attila the Hun to Mark Zuckerberg. Lots of great commentary here— Myrtle makes clear, just because someone can pass a test – or win an election – DOES NOT guarantee they’ll actually be good as a leader.
Mallory (Billie Lourd) has impressed Myrtle, who wants to see if she might be a possible Supreme. Cordelia feels it’s only honest to let a man take the Seven Wonders if he’s able, not wanting to hold on too long for the sake of being Supreme— she’s also fading in her power. We further see when Coco St. Pierre Vanderbilt (Leslie Grossman) came to the Academy after becoming a “gluten detector” for rich socialites.
At the “cusp of the Blood Moon,” the warlocks gather to bless Michael. There’s a “circle of power” conjured around him. Moore is the only one on the council who’s unsure of what they’re doing. He sees the “white–faced demon” underneath Michael’s angelic exterior. On the road, Moore stops for gas. There, he sees Miriam Mead (Kathy Bates), who asks for help with filling up her car. Uh oh. She cuts his Achilles heels, then his throat, and she covers him in gas, lighting him up while pulling away from the station. That’s one charred warlock! We discover Ariel is working with Miriam and Michael, all because he’s a sad misogynist stuck below witches in the magical hierarchy.

Michael begins the Seven Wonders tests. Everything goes by fast with Michael proving himself well through each test. The final test – “Descensum” – begins, as he must go down to Hell. Perfect, considering his father’s Satan, right? Cordelia changes the terms, asking the young man to bring back Misty Day (Lily Rabe) from the depths. The warlocks are pissed. She won’t change her mind, considering the dark times approaching. She also makes clear, for the men, she won’t coddle “fragile egos” any longer. Not to mention Michael’s up for the challenge. And so he descends.
He walks through a long corridor of doors. Through one, he finds Misty in front of the frog she’s supposed to be dissecting. Misty’s personal Hell continues in a cycle forever. Until Michael dissects the teacher for her.
Then Michael comes back with Misty. Everyone is astonished by the young man’s powers. Cordelia’s happy to have another of her witches back. She’s left to deal with the revelation a warlock will be the next Supreme, starting with nosebleeds, more deterioration for the current Supreme. Alone together, Misty tells Myrtle and Cordelia there’s “something wrong” with Michael. While he was down there, “evil was speaking to him,” as the children in her classroom went white eyed, their mouths opening, and they spoke to him in another language. Afterwards, Cordelia says she never intended to let him be Supreme, and only wanted to test his powers, so the coven can prepare themselves. At least they’ve got all the ladies back together. Even Stevie Nicks turns up again for Misty’s return to sing a tune.

“He wore the perfume of death”

Cordelia charges Madison with trying to find out all she can about Michael. They don’t know Chablis is eavesdropping. He wants in on their dirt digging, because he has a bad feeling about Mr. Langdon. Where exactly is Cordelia heading? You fucking betcha: MURDER HOUSE, BABY!
That’s right. Next episode is titled “Return to Murder House” AND it’s directed by Sarah Paulson. Can’t get any better. This season has been doing some great fan service, and Father Gore’s eager to see what’s in store for our jump back to the world of Season 1.