Somehow it took until 2018 for a big studio Hollywood thriller to star an Asian-American actor. One of those facts you almost want to automatically disbelieve— well, imagine how Asian-Americans feel! Next time you’re ready to ask why representation matters so much in the film industry, you may want to consider how far the mainstream has to go before it starts making up for the past.

John Cho has fast proved himself a quality leading man outside of comedy. After his turn as foster dad Andy in Season 2 of The Exorcist, he had lots of horror fans’ attention, and Kogonada’s film Columbus has helped fans of a good drama see he’s far better than merely being known as one half of Harold & Kumar. In Searching, Cho plays another father figure, David Kim, who must frantically scour various social media websites to try tracking down his missing daughter Margot after she vanishes into thin air.

Director Aneesh Chaganty and co-writer Sev Ohanian offer a nail-biter of a story. Their screenplay examines post-modern issues that affect parents and children alike. Searching is a psychologically horrifying journey, from the perspective of a father, into the divisions between our online self and our real self. Everybody operates in this way, even those who believe they’re authentic at all moments of the day. When screens are the intermediary between us and the world, our lives aren’t as real as they once were, and when the screens aren’t around their influence over us continues to linger on.

Young people today grow up online. Their parents share photos of them, some that’ll make their kids mad when they grow up, they digitally plan and schedule their time, make whole photo albums on Facebook (no need for those big, clunky things anymore with the static-y pages), and the intimate family moments previously kept private – i.e. mom’s cancer – are captured for all the world to see.

Nowadays everyone’s connected, even grandparents, so it’s strange or suspicious for a young person to be totally unreachable. By the same token, the digital landscape likewise makes it easier for things to be kept secret, compartmentalised from real life offline. Kids and parents are connected better than when communication was relegated to payphones, but kids further have tools to quarantine their lives in a space away from their parents. David and Margot are a fractured family after mom dies, which led the daughter to keep a life to herself, using the disconnect of social media and texting to shield the truth from her father. Tragically, it’s through the mystery of her disappearance that dad uncovers the divide between them that’s been growing.

The excellent irony of the screenplay is, once David realises he doesn’t know his own daughter, he uses the internet as a way to reveal hidden truths— the same tool she used to casually deceive him. This aspect explores how social media and other communication technology allows people to create a facade. Just as quick as a father discovers a child can use the internet to mislead them with casual intent, he likewise discovers the depths of depravity to which others can descend with an altogether insidious intent. 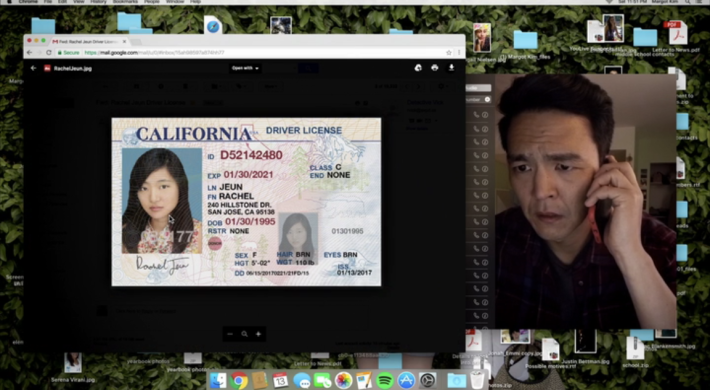 Internet and social media are presented twofold: a useful tool but also destructive. David’s able to use the online world to his advantage at times. The internet works against him, too. When the search for Margot goes more public, so does the scrutiny of David. People accuse him of anything and everything, which they can do because it’s the internet, and you can’t take the entire YouTube comments section to trial for libel. Others use the internet in conjunction with Margot’s disappearance + their tenuous friendship with her (a.k.a using the Korean girl to help with studying) to get their Warhol 15 Minutes on YouTube or the local news.

These moments are so upsetting because they bring to life the unsettling ways people react/act online in the wake of real tragedies, like the Tara Grinstead murder case, among others. The brutal judgement of the digital landscape takes on the form of a mob, usually hindering rather than helping.
What makes these specific scenes anger-inducing is the plot’s told through a series of screens: news on television, smartphones, FaceTime, text messages, audio clips, YouTube videos and chatrooms, computer screens. Everything feels out of reach. Only rarely does the search make its way into the outside world, leaving David’s attempts feeling claustrophobic and all too often helpless, like sitting behind those screens ourselves unable to do anything.

Searching‘s overall message involves David coming to terms with his own mistakes as a parent. The screenplay also stresses how treacherous online spaces can become for us all. Parents are usually blamed immediately for the behaviour of their children, or for not knowing about said behaviour. Chaganty’s film doesn’t lean into the age old excuse of upbringing, neither does it make young people look inherently devious. It illustrates to the viewer how the post-modern digital world has significantly altered our relationships.

Searching isn’t devoid of all hope. Our relationships aren’t irreparably altered by social media, texting, and smartphones. Online spaces present challenges to parents and children. It’s not always a parent’s fault they don’t fully know their own kids, especially in an increasingly segregated digital world with secret/hidden options on Facebook and the iPhone, or Snapchat as a one-time experience, and endless ways to retreat into a private sphere of one’s own making. Capitalist companies and online predators are equally as dangerous in this day and age, posing figurative and corporeal threats to the young, naive kids who wander around exploring the world wide web.
In the end, David and Margot’s terrifying story examines how everybody is at risk when they enter the vast Wild West of the internet. Our best hope is to remain close, no matter if it’s at home or across digital borders— human connection doesn’t have to occur in physical spaces, so long as it’s honest.