In 1990, Roland West (Stephen Dorff) met with Jim Dobkins (Josh Hopkins) as the Purcell case was revisited. He takes them back to 1980, just after the suspicious cut-and-paste note was received at Tom Purcell’s (Scoot McNairy) place. There were a few potential leads, though nothing explosive. Wayne Hays (Mahershala Ali) kept hope young Julie was still alive out there somewhere.
In 2015, Wayne’s dealing with his dissociative state after coming to in the street. He believes he went there “for a reason,” not that it’s his mental health deteriorating with old age. His memories are gradually slipping. His son Henry (Ray Fisher) finds it difficult to watch considering his father can’t accept what’s happening and threatens to kill himself if he’s put in a home. Can Wayne unlock the keys to his memories and, in turn, possible keys to the case that continues haunting him?
25 years ago Wayne and Amelia (Carmen Ejogo) talked about the case returning after a decade following the discovery of Julie’s prints at the scene of a robbery. He was consumed by it, lamenting the space the case took up in their lives right from the moment they met. Back in ’80, he and Roland were already consumed then. They felt the answers were so close, just barely out of reach. Wayne started to wonder if the kids they questioned knew more than they admitted. 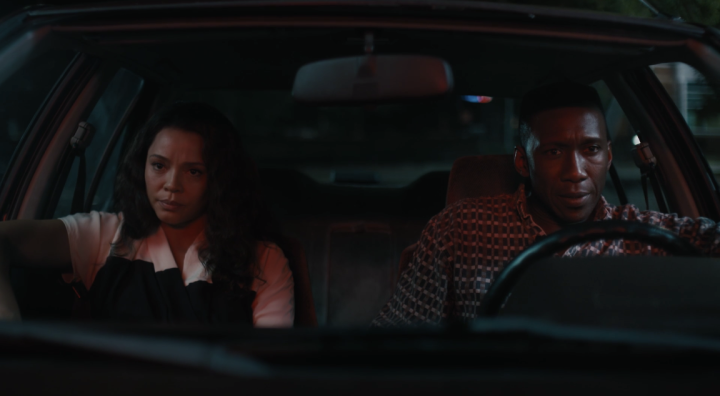 Through Roland we get more info on Wayne’s history with the police. Hays got railroaded in some form after the case. Nevertheless, Wayne was doing good work to crack the case open back then by re-interviewing one of the boys Will used to play with in West Finger. The kid said he never played with Will, though. Wayne and Roland went back through the kids’ things. Wayne found several scraps of paper with messages like DON’T LISTEN, I’LL ALWAYS KEEP YOU SAFE, and others stashed in a notebook.
In 1990, Amelia was trying to get info from the cops for Wayne, using her position as an author who wrote about the case to get a look at crime scene photos from where Julie’s prints were found. At the same time, Wayne was trying not to let the case bleed into his personal life. In a Walmart, his daughter Rebecca wandered off, sending dad into near hysterical panic searching for her before she turned up fine.
Back in ’80, Wayne and Roland went to Hoyt Foods, where Lucy (Mamie Gummer) used to work on the chicken line. They spoke with the company’s Ozark Children’s Outreach Center. They wanted to go over info on all the employees in case of anything suspicious. At the station, the partners went through what they found at the Purcell house, as well as fielded bogus tips from people hoping to get a piece of the reward.

“You separate yourself from something when you name it”

In ’90, everything between Wayne and Amelia was falling apart completely. He started reading her book, unable to get too deep into it because he was essentially a character in the narrative. She was feeling excited about working on the case, and it bothered him, letting this drive more of a wedge between them.
Wayne came across further clues in the woods during the ’80 search: missing dice from Will’s love of Dungeons and Dragons. He also found a bag with various toys inside. Nearby was blood splattered on rocks. Wayne was sure Will died there, then his corpse was carried to the cave. They spoke with a gentleman whose land sat nearby. The guy said someone came to speak with him, though there’s no record of cops talking to him. He’d seen the kids before in the woods by his land, and a car driving by recently, too.
Ageing Wayne sits across from Elisa Montgomery (Sarah Gadon) again for more interview. Elisa found several people who saw a “very nice brown Sedan” driving in the neighbourhood around that time and near Devil’s Den. More people, including a black man with a scar on his face, went unquestioned— these instances, again, feel similar to the West Memphis Three’s case, and the scarred face man being mentioned is reminiscent of the Mr. Bojangles theory. This spikes Wayne’s memory as he recalls other bits of 1980.
During the search for Julie, Brett Woodard (Michael Greyeyes) was attacked by local men. They beat him up and threatened him. Ironic how one of them wears a hat with an American flag across it while beating a Native American veteran, pointing a gun in his face. How sadly relevant does this moment feel? Only in the past couple days Nathan Phillips experienced some sad racism from Catholic schoolboys wearing MAGA hats. Eerie timeliness.

In ’90, Roland went back to see Tom. The father was newly devastated, and somewhat hopeful, about the revelation his daughter turned up during a robbery. They kept in touch after the case. Strange, seeing as how Roland and Wayne lost touch. This says something about the traumatic bond between partners who witness such horror together.
Old Wayne’s life has become a muddled mix of past/present. He can’t seem to differentiate between the two. It’s gotten harder to look into the past. Because looking into the past means looking into oneself. “Finish it,” the memory of his once happy wife urges him from the shadows of his mind.
Back at the Purcell house during the case, Wayne found a photo album where Will was pictured in the same pose as he was found in dead. The picture was taken during the boy’s first communion. Meanwhile, after Brett was beaten he went back to his place to get something, like maybe a gun?
In ’90, Wayne and Roland met up at a bar. The latter was put in charge of a new task force for the Purcell case in his new role as lieutenant. This gave Best the chance to bring his old pal and partner back on as a detective, to give him the chance other white guys weren’t willing to give the outspoken black man. But there’s more to this tortured history, and we’ll see it soon.

“Einstein said past, present, and future are all a stubbornly persistent illusion.”

“The Hour and the Day” is next time. We’ll get a bit of David Milch’s genius alongside Pizzolatto, which is fan-fucking-tastic.