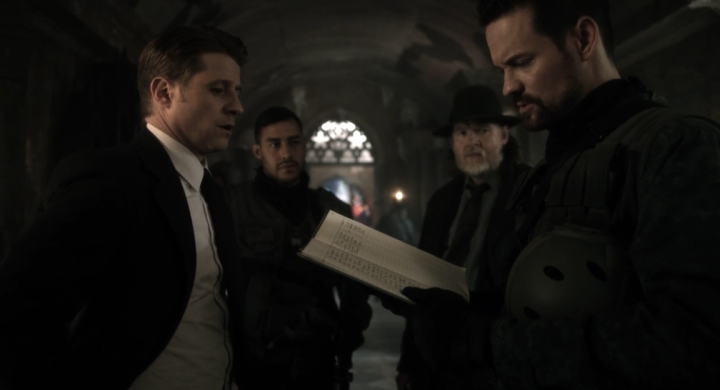 Captain Jim Gordon (Ben McKenzie) and Detective Harvey Bullock (Donal Logue) track down the guy who sells RPGs in Gotham City, tipped off by Barbara Kean (Erin Richards). The two lawmen end up at the end of guns. They’re quickly aided by soldiers who drop in from the rooftop. Looks like the federal government’s sent backup after all. Turns out, Gordon knows one of them well: Eduardo Dorrance (Shane West). They’re old army buddies. For those who don’t know, Eduardo’s going to be Bane— the last name comes from Sir Edmund Dorrance – Bane’s father – better known as King Snake.
Now that Jim’s got a ledger from the sketchy arms dealer, he knows it was Ed Nygma (Cory Michael Smith) who bought the RPG, putting him and Eduardo on the trail. Meanwhile, Bruce Wayne (David Mazouz) searches the “Green Zone” to potentially find Selina Kyle (Camren Bicondova). He’s concerned what will happen to her now that she’s, supposedly, murdered Jeremiah Valeska (Cameron Monaghan). He still hopes to save her, whereas Alfred Pennyworth (Sean Pertwee) believes it’s a lost cause.

Poor Ed’s trying to piece together his dissociative life. He refuses to accept he’s murdered all those people. He knows it was the Riddler. Yet he was never really a perfect guy. He’s killed before. Right now, he’s being taken into custody by Jim and Eduardo. He tries to ask Gordon for the benefit of the doubt. But Ed’s booby-trapped the place, not willing to even have a trial to prove himself. Dorrance is stuck on an explosive plate, giving Nygma time to get out. This leaves Jim and Eduardo to figure out how to defuse the IED under the plate, and the former knows there’s some “sort of puzzle” involved. The cap solves the chess-like game. But that crazy bastard’s out there someplace. Not to mention the streets are angry after it’s revealed Ed was responsible for the explosion. We see Oswald Cobblepot (Robin Lord Taylor) also get word about Ed’s involvement and it crushes him.
Someone grabs Ed and he wakes up tied to a chair, connected to a bunch of car batteries to send shocks through his body. A woman named Gretel (Marceline Hugot) lost her dog, Jo Jo, during the explosion. She and her boys want vengeance. While Ed’s shocked he starts to have flashbacks. He’s able to get himself out of the torture chair, then he’s headed right for Cobblepot’s place. He blames Oz for turning him into a “murderous puppet.” But Penguin says the night the bridges blew he paid Dr. Hugo Strange (B.D. Wong) to save Ed from a brutal stab wound.
What did the mad doc actually do?
At the Siren’s Club, Bruce finds Selina drinking and partying. She tells him about the night his parents were murdered. She saw the Waynes get shot to death and did nothing to stop it. She, somehow, feels this makes her culpable, or at least that she ought to feel guilty. She believes it defines her.

“I see people losing their will to do good” 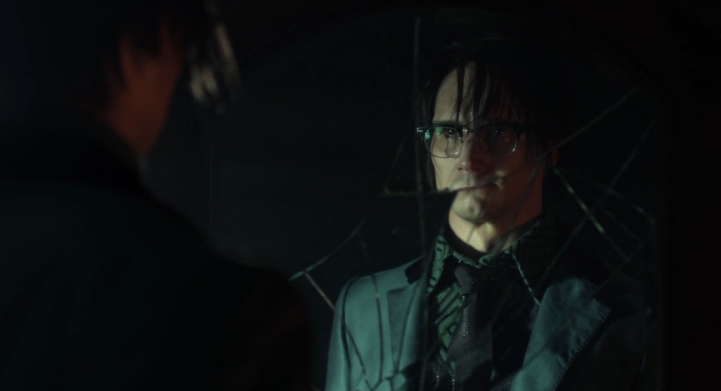 Across the city, Ed’s at the Siren’s Club talking to Barb, who’d rather turn his face into a “jigsaw puzzle.” He tries to convince her it wasn’t him who actually blew up Haven. He explains he was taken to Strange and something happened to him. Who’s working with Strange? Why would they want to use Ed to kill those people? Barb’s got an ear to the streets, which might help Nygma.
In a shady makeshift laboratory, Dr. Strange is experimenting on bodies. He’s surprised when one body bag actually contains Ed instead of a corpse. Ed wants answers about his “alter–ego.” The doc placed a chip in his brain to allow someone control. Who’s pulling the strings on this puzzling puppet? Well, we won’t find out yet, seeing as how Strange has the upper hand, and he’s planning on surgery.
Eduardo and Jim get there before Hugo can get digging too much into Ed’s brain. Suddenly, the truth’s revealed: Eduardo has control over the Riddler. The government has a relief plan. First, they need “proof of loyalty” from Cpt. Gordon. They want him to kill Nygma. And if Jim won’t do it, he’ll be killed by Dorrance. Of course the cap refuses, and he makes a getaway before there’s a bullet lodged in his brain. This now means the Riddler’s been dispatched to finish him off.

Elsewhere, Jeremiah’s alive, despite having holes punctured in his gut. He’s only allowed Selina and Bruce to believe he’s dead. Makes nasty plans easier on his end. Ecco (Francesca Root-Dodson) hasn’t stopped tunnelling, either. They’ve reached a spot that takes them right up into Wayne Manor. There, a plastic surgeon has been working on two patients. Want to bet they’ve recreated Martha and Thomas Wayne? Is this version of the Joker about to haunt Bruce? Oh, my. 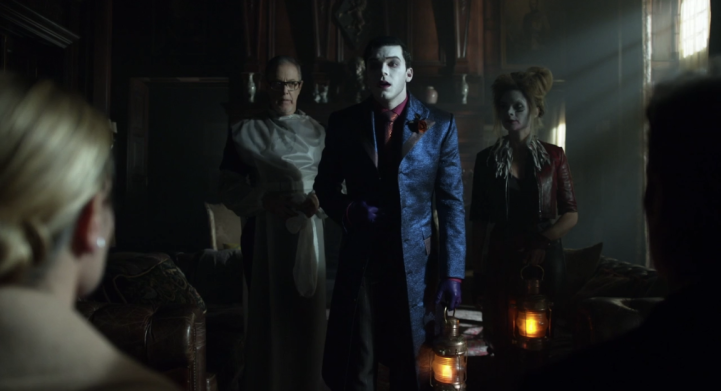 The perfectly titled “13 Stitches” is next time.
Prepare for terror.