Ryn (Eline Powell) is keeping an eye on her people as they adjust to land. Things aren’t perfect. Katrina (Aylya Marzolf) hasn’t quite adjusted to not being the leader. Ryn has to explain to niece Cami (Millan Tesfazgi) what happened to her mother. She also has to constantly deal with Katrina’s defiance.
At an addicts support group, Ben (Alex Roe) looks to deal the siren song. He vaguely speaks of his addiction and “complicated relationship.” He feels lost, having become addicted to his relationship with Ryn alongside his existing relationship with Maddie (Fola Evans-Akingbola). He’s not sure if the song is what draws him to Ryn, or if it’s a genuine connection. We also see Susan (Garcelle Beauvais) kicking around at the meetings in her own group. She mentions hearing Ben talk to her husband Dale (Gil Birmingham), though he advises she might want to stay out of their daughter’s dating life. She doesn’t, later telling Maddie she saw Ben.
Meawhile, Xander (Ian Verdun) is getting pretty close with Nicole (Natalee Linez), who’s continuing to worm her way into his inner life. She starts to ask about what happened to his dad and if  he died on the boat. All a way for her to get more info for the government. Xander mentions how something pulled his dad overboard. Sad to see him being used when he’s in such a vulnerable place.

Poor Helen (Rena Owen) has to play “den mother” to the merpeople, and it’s not ending any time soon— Ben’s discovered the underwater disturbance will be going on for 8 months. Interesting to see the older merman bow down in front of Helen, as if recognising her as having been one of them. Soon, Ben notice the merpeople’s skin is getting bad, which means they need to go back in the water. Yet they can’t while the “sonic waves” are happening. Not as easy as going to a different spot: there are other colonies of merpeople who protect their environments by force.
At the bar, Calvin (Curtis Lum) meets with a guy from KFGT News in Seattle who’s covering the beached whales. The two talk about Bristol Cove’s mermaid situation. The fisherman shows footage he captured on the boat from the attack. The newsman’s not interested: “Call the Enquirer,” he quips before leaving.
Helen and Ben realise they’ll need money to keep their mer-friends safe, which means she’ll extort her relationship with Ted Pownall (David Cubitt) in order to get them funds. While Helen takes care of the cash, Ben’s getting Ryn a fake ID, then he shows her how to do a bit of driving. The merpeople are left with Maddie. When she introduces a few of them to the fascination of fire, Katrina slips out with her spear to hunt for food, along with Cami and daddy merman. They wind up encountering an angry wolf. Cami’s attacked, just as Maddie drives the animal off with a rifle.

“You can’t force it— it just has to happen.” Back at the cabin, Ryn’s angry Katrina disobeyed her and caused Cami to be injured by another predator. This causes more dissent. But the new leader makes clear she’s not to be disobeyed. She only cares about the general survival of her people. They get the merpeople into the water for a short while, enough to help. Shitty time for a bunch of drunk people to come down from the bar to jump in, including women dressed up like mermaids. OH! SHIT! Things nearly go sideways before people scramble off the beach. Afterwards when Xander turns up, he and Ben end up fighting. He wants revenge against Levi (Sedale Threatt Jr.) who was with Donna when his father was killed, unwilling to sit by while the merpeople are on land.
Later, the merpeople head inside a gas station where they make a little trouble, grabbing food from the racks. They almost rough up the clerk. Katrina tries to make a power grab once more, only the others rally behind Ryn as their leader. This is going to cause a major struggle with plenty of repercussions. Katrina’s already going off on her own. Can’t be good for anybody.
At her shop, Helen receives a visit from Elaine (Sarah-Jae Redmond), questioning her about all the money she got from Ted. She’s unsure of any real connection between Helen and the Pownalls. So, she’s going to do a test on some DNA, swiping a coffee cup from Helen’s shop to take with her. This might reveal some big secrets that will rock both Elaine and Bristol Cove as a whole. Potentially, anyway.
Things with Ben and Maddie are getting better. Although there’s a possible polyamorous situation budding between them and Ryn. We’ll see if that develops throughout the season. In the meantime, Katrina’s come back full of blood and carrying the wolf she’s killed, trying anything to assert her dominance on land. 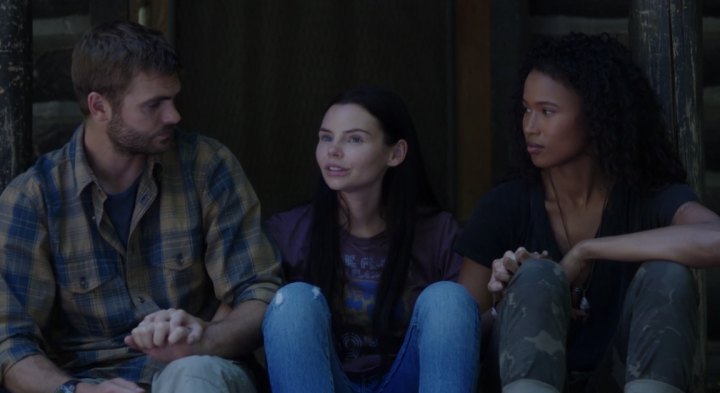 Things are heating up, in more ways than one! Excited for the mermaid-human thrupple. Be nice to see a merperson teach humans more about the vast spectrum of love that exists. And representation matters, even if this is a sci-fi show at the core.
“Natural Order” is next time.