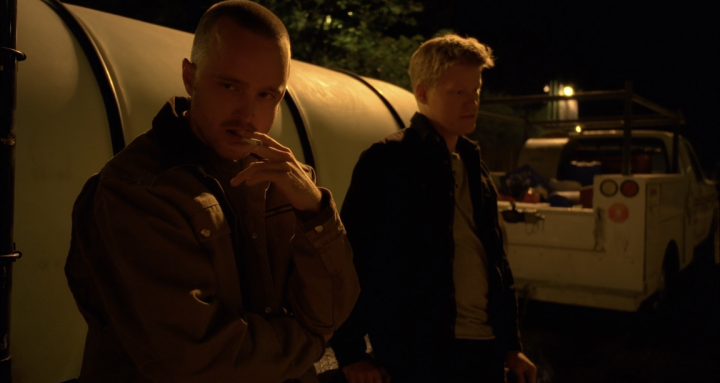 In the aftermath of the train robbery, the meth crew have to get rid of the young boy’s corpse and bike. Mike (Jonathan Banks), Todd (Jesse Plemons), and Walt (Bryan Cranston) work to take apart the bike and put it in a barrel to dissolve in acid. We’ve seen them do the very same thing to people before. More disturbing to see it happen to a boy. They put him in a barrel just like the bike. Outside, Jesse (Aaron Paul) refuses to have anything to do with the process. You can see the hate in his eyes when Todd stands next to him. He wants to kill him. One tragic piece of all this is Jesse tried so hard to leave behind the guilt of what almost happened to Brock, to the other boy, only for him to wind up in a worse, closer place to all that hideous violence.
Todd a.k.a “Ricky Hitler” pleads his case. He believes there was nothing else to do but kill the kid. Mike and Jesse are clearly disgusted by him. Somehow Walt doesn’t look as angry. Being a father changes nothing about his perspective. Ugly shit. How do the crew move past this? Walt suggests they keep him close so he doesn’t do any further damage, as does Mike, and Jesse reluctantly agrees with his partners for lack of a better option. The worst thing is Todd’s absolutely a psycho – look at him with the tarantula jar! – and Pinkman is the only one who sees it.

Without doubt the group are fractured worse than ever. Won’t make their lives any easier. Speaking of not being easy, Mike has Steve Gomez (Steve Michael Quezada) and another DEA agent watching him while he’s at the park with his granddaughter, so he fucks with them leaving a fake note as a “dead drop.” The note reads FUCK YOU. Mike also has the bug in Hank’s (Dean Norris) office to stay further ahead of the game.
On the latest cook, Jesse and Walt see the news report about a missing 14-year-old kid— the one Todd killed. The older cook attempts to pass it all off by saying what’s done is done. The only thing on his mind? Business. Jesse can see how free Mr. White’s conscience is of guilt. A simple bit of whistling says more than any bunch of words ever could, and it’s chilling to see a steeper decline in this man’s morality.
Later that night, Walt meets his two partners back at their headquarters. Mike and Jesse have decided they’re getting out of the business. Walt tries to wield whatever influence he has left over Jesse. His cook partner won’t continue, no matter the debate. Mike wants to sell the remaining methylamine. This doesn’t sit well with Heisenberg. He sees $5-million as “pennies,” again illustrating how far gone he is compared to just a season ago. “Mr. White, is a meth empire really something to be that proud of?”

In the desert, Mike and Jesse meet their buyer, Declan (Louis Ferreira). This guy wants to get the “blue stuff” off the market. Not going to work, seeing as how Heisenberg wants to remain in the game. Declan doesn’t dig that. He’s a capitalist. He wants to corner the market. This sends Jesse to go see Walt at his place to talk about selling his third of the methylamine. He wants to get away from murder and mayhem, whereas Mr. White sees it as a point of pride because of his past with Grey Matter, unable to let go of his failures. They’re interrupted when Skyler gets home. Walt treats it like any other co-worker get-together, not like two meth kingpins sitting down for a bite to eat. He also later uses his sad home life to try convincing Jesse that cooking meth is all he has left.
Walt knows things aren’t going his way. He rushes to steal the methylamine before Mike can sell every last drop. This puts the two men at odds. Mike’s intent on keeping the cook hostage until the deal’s done. He has to restrain Walt while he goes to do a few things before the meet. Soon as Mr. White gets the chance he’s figuring out a way to get himself free from the radiator. He strips an electrical cord to help melt the zip-tie around his wrist. At the same time, Mike is in with the DEA. Saul Goodman (Bob Odenkirk) is doing his best lawyer act to try and get them off his client’s back. Saul accuses them of “stalking” Mr. Ehrmantraut: “Sadly, he‘s just not that into you.” Easy for Mike to play Hank with the bug giving them inside info.
He’s very pissed when he gets back to see Walt free, though Jesse is waiting for him, too. He wants to shoot the cook. But Jesse says Mr. White has a way for everybody to get what they want. Hmm. Too good to be true, surely? Yes, you bet.
“Say My Name” is next. There’s going to be some crazy shit going down.