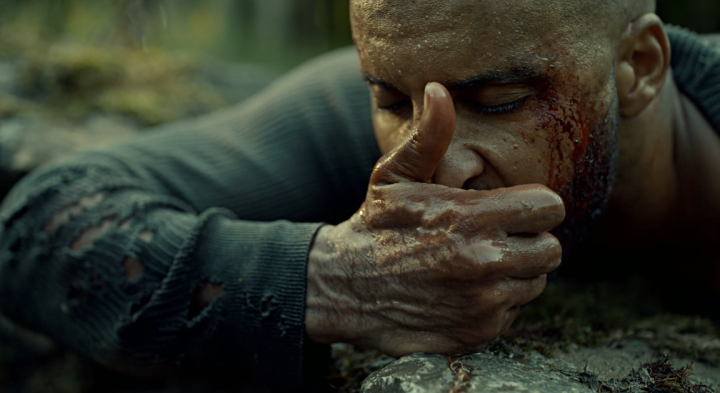 The train’s collided on the tracks with Mr. Wednesday’s (Ian McShane) beastly car, causing quite a wreck. Laura (Emily Browning) is carried out by Mad Sweeney (Pablo Schreiber), and Shadow Moon (Ricky Whittle) is left behind as a test. Shadow crawls out of the rubble just as his supposed pals and undead wife head off once more. Looks like a road trip by foot for our man. He makes it to a spring of water where only a crow hears him mumble in a state of near unconsciousness.
The crow is Muninn— one of Odin’s buddies— who returns to Wednesday with news of Shadow’s travels. Meanwhile, Laura’s getting fixed up by Mr. Ibis (Demore Barnes). Her undead body’s going to shit fairly quickly, producing maggots. They’ve got to go see Argus (Christian Lloyd), says Wednesday. He’ll “stop the rot.” But the leprechaun doesn’t dig that plan, suggesting to head for New Orleans.
Mrs. Moon wants to follow Odin. For now, anyway.

Along the road, Shadow gets called on a grift by a young woman called Sam Blackcrow (Devery Jacobs). Their meeting’s a little antagonistic at the start, but she does agree to give him a lift. Maybe a new buddy-buddy pair? We’ll have to wait and see.

“We build the new world on top of the ruins of the old.” Ibis tells us the story of Argus Panoptes, seguing into how this Greek myth became a part of the American fabric, as Argus was reborn “as the God of Surveillance.” He’s part of what allows Mr. World (Crispin Glover) and his people to keep an eye on Shadow and everyone else, flying drones around the country. This is the Eye of Argus, which World went to use at the Black Briar Club. Wednesday’s sent Muninn to disrupt the drone stalking Shadow to give his man a better shot at remaining undetected. At the same time, New Media (Kahyun Kim) has finally emerged to meet with World.

The truth is just information

At a massive building— the headquarters of Argus— Wednesday and Laura step through a strange door into a massive field, where one of the old forms of Argus lays. They head further where Wednesday cuts the throat of a white heifer (this animal appears in many paintings with Argus), only for it to become a woman in sacrificial white whose throat spills blood onto the grass. A moment later and the woman’s laying dead but without her throat cut open. Wednesday takes a sacrificial knife from her body before he and Laura head back through the odd silver door. They come upon another scene soon of the Library of Alexandria. Laura must set fire to it as another act of symbolic sacrifice.
On the road, Shadow learns about Sam. She’s two-spirit: “Two spirits in one body— one masculine, one feminine.” She explains how it’s “considered a gift from the Creator.” He has his own idea about the gods. She knows all about shitty gods. Indigenous people, despite many having strong spirituality, certainly haven’t been delivered from hardship because of belief, which Sam knows quite well.

The Jinn (Mousa Kraish), along with Salim (Omid Abtahi), stop at a strip club, where they meet Iktomi (Julian Richings) in his backstage weed garden. For those who don’t know, Iktomi is a trickster from Lakota mythology, and his true form was that of a spider, similar to Anansi (Orlando Jones).
Never bad having a trickster spirit on your side when you need to do sneaky shit.

Technical Boy (Bruce Langley) and New Media go see Argus at the very same moment Wednesday’s trying to get Laura to kill the God of Surveillance. New Media’s trying to get Argus to merge with her in an unsettling technological moment of mutual climax, like they’re fucking digitally. Suddenly Laura stumbles upon them and plants the sacrificial knife into Argus, shutting everything down. Not long and Laura begins to feel life inside her again. But Wednesday says her road ends here and leaves without her.
Can she still manage to find her way back to Shadow alone?

It’s funny—
a lot of my dreams are nightmares.

Shadow gets good advice on the road from Sam. She tells him he can either keep searching or the peace he wishes to find in life, or give up looking. It isn’t a reductive take, it’s a realistic one. Seems to Father Gore that Sam’s been on the road searching for her own answers. While Sam and Shadow may be parting at the moment, we’ll surely see her again.
He’s headed back to the Ibis and Jacquel Funeral Parlor to see if he can himself fixed up. There, he finds Wednesday waiting. Shadow’s somewhat angry about the journey he’s been on, only wanting a few answers. He doesn’t get any. It’s all an exercise in faith.
Soundtrack note: The song at the end of the episode is “Geronimo’s Cadillac” by Michael Martin Murphey.

Fuck all the talk about behind-the-scenes drama and all the shifts in production, American Gods is proving itself in Season 2 to be just as good and as inventive and wild as it was in Season 1. Things have changed, but they’re changing for the better. They’re evolving. And isn’t that what the show’s all about? Great to see Devery Jacobs (see her star-making turn in Jeff Barnaby’s Rhymes for Young Ghouls ASAP) in there as Sam Blackcrow. Can’t wait for more of her.
“The Greatest Story Ever Told” is next time. Hopefully there’s some blasphemy!