Fox’s Gotham
Season 5, Episode 11: “They Did What?”
Directed by Carol Banker
Written by Tze Chun

Gotham’s in worse shape than ever. The city’s been devastated and refugees are stranded everywhere. Captain Jim Gordon (Ben McKenzie) and Detective Harvey Bullock (Donal Logue) gather the rest of the cops left in hopes they’ll be able to fend off Nyssa al Ghul (Jaime Murray), her troops, and Bane (Shane West).

Poor Alfred Pennyworth (Sean Pertwee) is lying on a hospital bed, his face mangled, and Bruce Wayne (David Mazouz) is left feeling guilty. He feels responsible because of what he did to Ra’s al Ghul, causing the daughter to come looking for him. Speaking of, Nyssa is across town holding Barbara Kean (Erin Richards) hostage. She’s taking up the mantle of her father, “destroying empires” across the world. Barb tries to bargain with Ms. al Ghul, for both her own life and that of her child’s, too. Nothing is working.
At that same moment, Bane’s taking over the military command and readying them to destroy the Green Zone entirely.

Penguin (Robin Lord Taylor) doesn’t want to watch his city be destroyed. He wants to protect Gotham, whereas his pal the Riddler (Cory Michael Smith) would be happy to turn his back and never worry about that place again. They part ways, at least for now. Oswald— “part dandy, part snake“— can’t stand by to let outsiders tear down everything he helped build. He goes straight to see Cpt. Gordon. Perhaps the possible destruction of Gotham will bring enemies back together again. Soon Riddler turns up after choosing to stay and fight, as well. 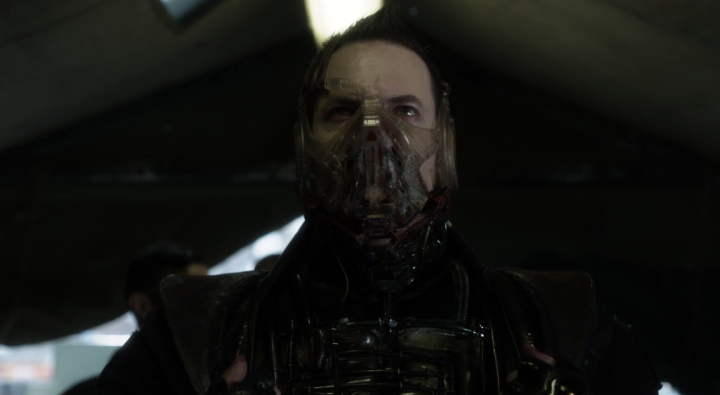 We’re seeing the wonderful prototype of what will eventually become a Batman relationship. Lucius Fox (Chris Chalk) and Bruce look over Wayne Enterprises weaponry developed in the lab. Our soon-to-be Dark Knight has a look at all the technology available to him, deciding what to take as he plans to help fend off the coming assault.

Bane’s rallied hundreds at the GCPD’s doorstep. He’s got guns and a tank aimed at the fortified walls. Gordon isn’t concerned about the soldiers “just following orders” like Bullock, ordering his people to start firing on the army. Across the city, people watch as bullets fly and the war for Gotham has more than officially begun. Big origin-type moment happens when Oswald protects Ed from a grenade and gets a piece of shrapnel in his eye, giving the Penguin his signature one-eyed look.
Things get wilder once Bane uses a rocket launcher to blow a hole in the GCPD’s barricade. Gordon and others retreat inside, where he gets word from Lucius that Barb’s been taken by Nyssa. Dr. Lee Thompkins (Morena Baccarin) and Selina Kyle (Camren Bicondova) are also on-hand to offer their help.
In the meantime, they plan to use the battery Jeremiah (Cameron Monaghan) originally built to power the GCPD, by reverting it into a bomb to use for their purposes. Also involves blowing up Wayne Enterprises. Bruce does it himself, willing to “sacrifice everything” to save Gotham just like his parents before him. “My life is etched on the walls of every alley and dirty warehouse here.
My blood lives in its broken concrete.” 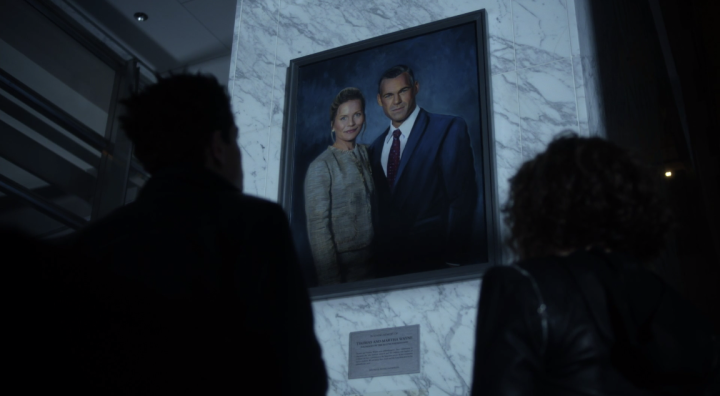 Jim manages to save Barbara, though the two of them wind up in a stand-off before they can save their child. Nyssa has them in a precarious spot. She and Jim fight, and while she’s distracted he gets a blade, tossing it to Barbara as he handcuffs himself to Nyssa. Barb grabs a gun after stabbing one of the men, but she and Jim aren’t able to defeat Nyssa, even together. Until they stab her with the same knife as her father. Bigger problem? Nyssa orders the general to kill himself, putting Gotham on a collision course with total destruction— no turning back.

In the street, Bane finds Bruce and Selina. They’re forced to fight him. He gets the Cat in his grip, ready to kill her with his bare hands. But she stabs him and Bruce plants a cloaking device on the big man. It’s technology developed during the “Nightwing Project” (curious name in the DC universe) at Wayne Enterprises. The beacon draws a massive flock of bats, one of them crossing overhead and showing us the bat symbol over the moon! This distraction allows Bruce and Selina time to get away.

Cpt. Gordon and his friends stand in front of Bane and the remaining military, ready to face the gunfire. Except the soldiers refuse once they see the rest of Gotham stand up, too. Jim gives them the option to cross sides. When Bane is about to starting firing himself, the goodness of the soldiers overcomes evil, and they prevent any further massacre of innocent people. Somehow, morality triumphs in Gotham. 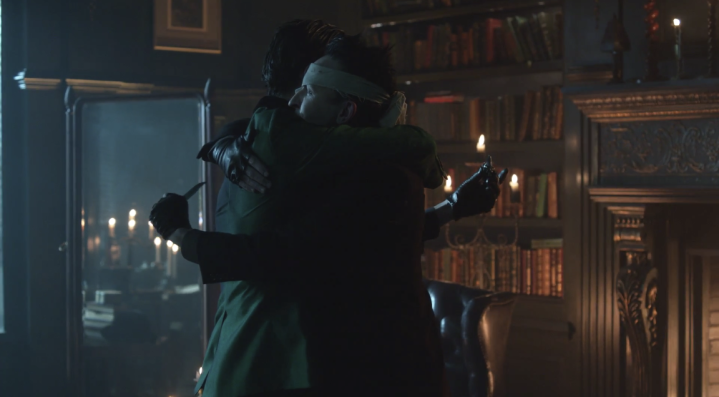 Everybody’s happy to have things settled. Jim finally gets to hold his baby girl, whom Barb has named Barbara Lee Gordon in a touching gesture to her new ally, Dr. Thompkins. Then there’s Bruce, whose guilt continues to linger. He feels he’s putting Gotham and those he loves in danger because of what he’s done— a recurring theme that will go on and on for him as he becomes Batman further.
In stark opposition, Penguin and the Riddler are descending into supervillain territory after being spurned by their city. They continue an antagonistic relationship built partly on a semi-love story and partly on an I-want-to-murder-you story. Their fragile bond remains. Perfect image above as they prepare to stab each other in the back at a moment’s notice while also embracing.

Gotham’s finally reunified with the mainland. Cpt. Gordon’s being given title of Commissioner Gordon for his hard work. Bullock warns he’s really “swimming with the sharks” this time in the upper echelons of power. It’ll still be good to have somebody like him there to try and wield a moral compass. For his part, Bruce is deciding to leave for a while. He feels the city’s well protected under Jim’s watch. He chooses only to leave Selina a letter, which hurts her. Then he’s gone.
But we know, one day, he’ll return to help protect Gotham again, when he’s most needed. 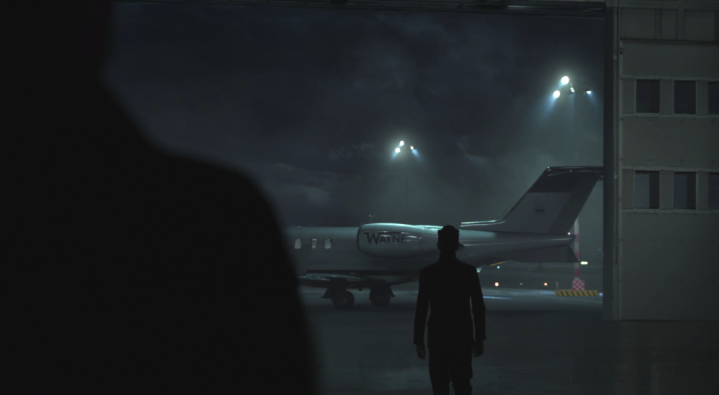 Fantastic episode! Best part is, there’s another episode before we say goodbye to Gotham after five wild seasons. The series finale— “The Beginning…” ironically being the end— is actually set ten years in the future, when Bruce will have to come back to the city he loves, the city he left, as a familiar villain rears his head again to threaten Gotham.