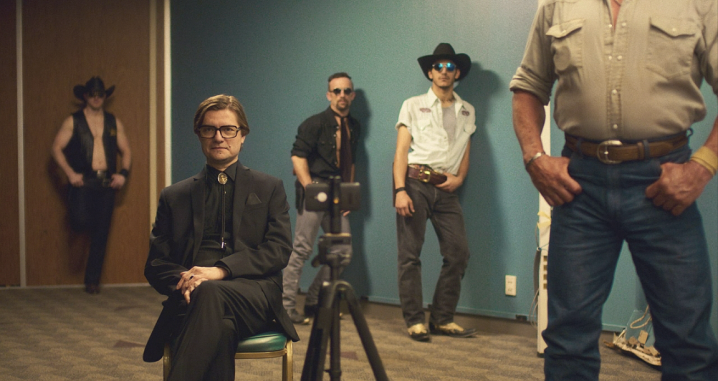 In the Tarot, The Fool is a youth setting out on a path of discovery, and, in spite of good intentions, they’re unaware of the dog nipping at their heels. If the card is upright, it means new potential that brings risk, warning to look before leaping. If reversed, the card warns against rash decision making and advising not to rush into things before knowing all the facts— it also warns appearance is not reality.

A young man who just turned 18— Andy— is in front of the camera, admitting he’s “still a virgin.” You see where this is headed, right? Remember the guys Damian (Babs Olusanmokun) was talking about, the kind of films they make? The gradual conversation between Andy and the man behind the camera, Stevie Crockett (James Urbaniak), is terrifying. Stevie says he fantasised as a boy that his brother, Rob (Brad Hunt), would jerk him off “after school.” He’s trying to get Andy to open up. He gets more disgusting as the time goes on. Normally it’d be fine. He’s only talking about gay sex. It’s what we already know is happening that makes it nasty and sinister.

The young man’s forced to take drugs— “a birthday present.” He’s told the price of his orifices and made to sign a consent form without reading. Before Stevie leaves Andy, he tells his henchmen plainly: “Rape him.”
A harrowing scene. 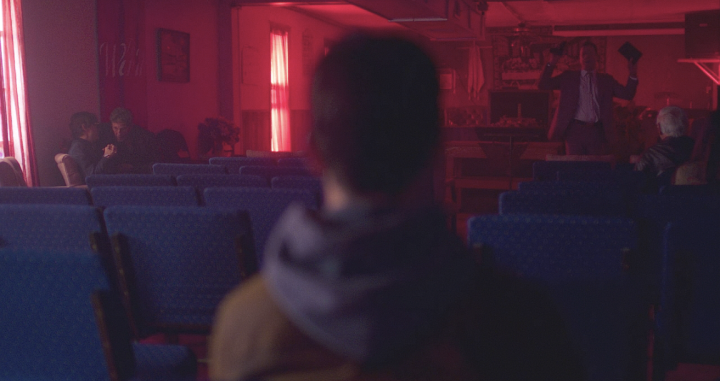 Outside, Detective Martin Jones (Miles Teller) tails Stevie to a church. A preacher riffs on things like “a morbid preoccupation with sex” and Nazis using the “powerful and ancient symbol of magic” in the swastika. The preacher warns about a “fear of knowledge.” He loves God and guns. He talks about being a rattlesnake, not to be stepped on— similar to the “Don’t Tread On Me” slogan clung to by American libertarians— and not to let the world “de–fang you.”

Refn works on a wonderful motif throughout the series, both in the storytelling and visually. Too Old to Die Young is a postmodern Western in many ways. One way it comes out is through Martin as a cowboy-like figure in a New Wild West. Here, he’s pitted against the bad outlaw, in Stevie particularly. Stevie’s whole look is Western villain— all black, cowboy hat, bolo tie— and even the New Mexico setting has the bar playing country music. (Any coincidence the brothers have the last name Crockett?)
It’s at the bar where our detective-assassin manages to worm his way into the company of the Crockett brothers. He plays into their trap, pretending he’s a young salesman whose girlfriend left him, who might just be interested in doing porn. Stevie shows him a glimpse of what the brothers do. The stoic Martin does his best to play pretend, going so far as to admit he “fucked a 16–year–old.” (Not a lie.) 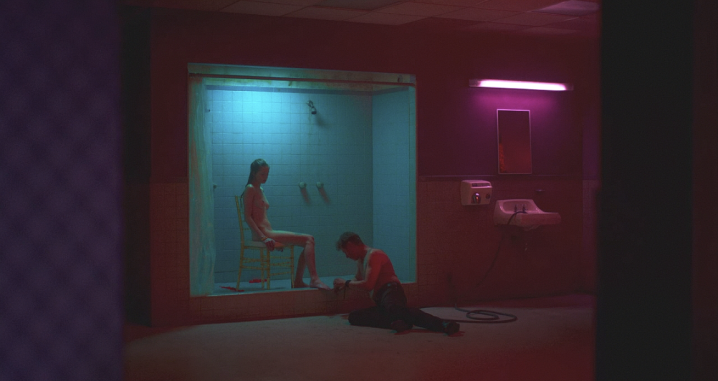 “What does my future matter anyway?
It’s all collapsing around us.” 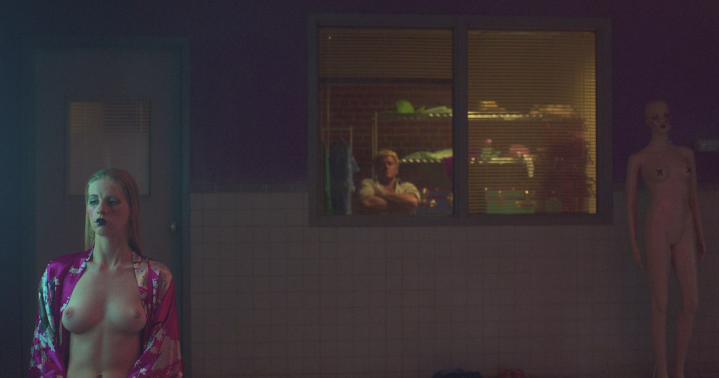 Rob hoses a lady down, the way a guard would a prisoner. When he’s done he grabs her by the throat, pressing her against the wall of the shower room. His tattoo of a Christian cross is a perfectly juxtaposed image against what he’s doing to this young woman. He takes out a switchblade to cut off what little clothes she’s wearing, making her pose with her arms up, like Jesus on the cross.
Then he sits her down on a chair and paints her toenails. A stark contrast from what his brother did to young Andy in the opening moments.

Martin a.k.a Kevin is offered to “be in a scene.” He reluctantly agrees. He’s brought to a prison set. The two brothers hope Kevin will prove to be entertaining. First, they’ve got to get a look at their new star’s dick. Before the cock comes out, Martin blasts Stevie away. He goes to look for Rob and the others, but finds no one. When he returns to his car, he’s shot at, taking him on a chase through Albuquerque tailed by Rob and Bill. 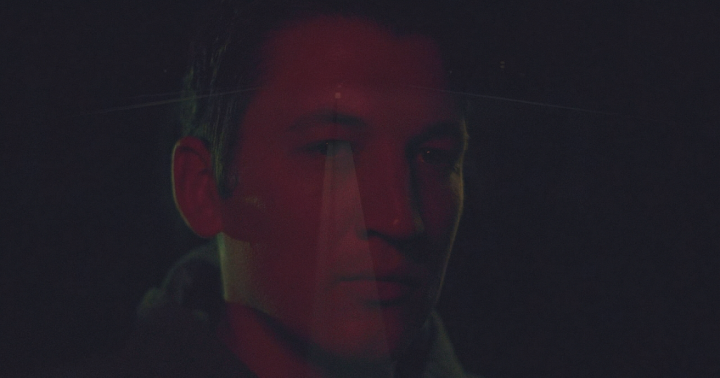 Soundtrack note: Rob puts on “Bubble Sex” by Tommy Seebach during the chase. He briefly switches over to “Mandy” by Barry Manilow, then switches back again, as he and Little Billy mourn the death of his brother in a totally absurd, hilarious moment. 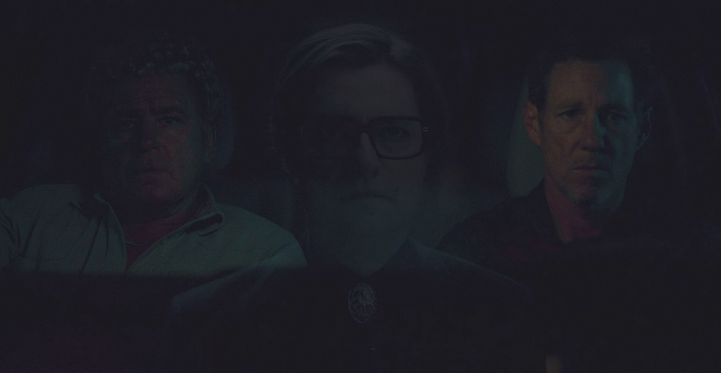 On into the desert, Martin’s pursued by Rob and Little Billy. They exchange gunfire from one car to the next. The electric car Rob’s driving break down, and Bill insists an “American–made” vehicle would’ve gotten the job done. The detective-assassin has enough left in his vehicle to fly it in reverse, smashing them up. He executes Little Billy.
Then Rob says he’ll take Martin to a kidnapped girl in the desert.

They come to a pipe sticking out of the dirt where the girl was buried. Martin makes the pornographer dig with his bare hands. After a long time, they reach the box below. Inside, a Mexican girl is chained and frightened. Martin makes Rob get her out, then guns him down before he’s killed first. The girl gets out of the box and stabs Dt. Jones, fleeing into the desert. Can’t blame her, really. This leaves Martin to walk out of there bleeding. 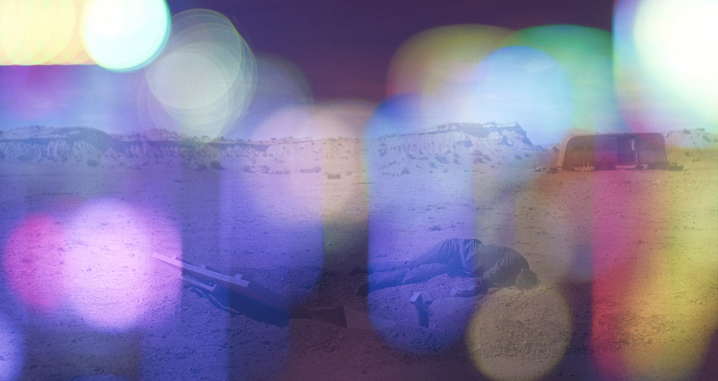 Just a mind-blowing episode. Haunting, brutal, funny, and visually stunning. Father Gore never expected any less. To strengthen that postmodern Western motif, Refn rolls credits with “I Put the Blue in Her Eyes” by Frankie Miller, true crooner of a country song.
All around one of the best instalments of Too Old to Die Young.

Volume 6: “The High Priestess” is next.