Smurf (Ellen Barkin) meets up with her pal Dt. Andre (James Remar) at a bar, where they sip drinks and talk clandestinely. She hears about “someone talking” to the state police about her family’s business. The cop doesn’t have any more info. She wants him to do some real work and find out more.
What does grandma do? She goes to J (Finn Cole), questioning whether there are leaks on their gradually sinking ship. She wants her grandson to keep an eye on his uncles. “You want to know what it feels like to be in charge?” she asks aggressively.
The rat is now J’s responsibility.

Adrian (Spencer Treat Clark) is being pressed by Dt. Pearce (Gil Birmingham) and Agent Livengood (David DeSantos). They want him to give them more. He gets a look at the trail of destruction left in the wake of Deran (Jake Weary) and his family. Will he be able to hold out? He gets a tip from Agent Livengood that his drug dealing buddy Jack is getting taken down today, ensuring he won’t be anywhere near the bust. Could look suspicious to others who know Adrian’s working with Jack. Y’know, like his boyfriend.

At home, J and Angela (Emily Deschanel) continue to have trouble being around each other. She tries to help J, though he isn’t willing to let her back into his life to any significant degree. What’s her ultimate purpose being back there at the Cody house? She keeps pushing Pope to break free of his mother. Is she doing it out of actual concern for him? Does she have an agenda?

J goes to Uncle Deran and lays everything out plain. His uncle thinks they’d be “out for blood” if Janine actually felt there was a threat. J’s worried, particularly after the sloppy job with Frankie (Dichen Lachman). The family is at odds again in so many ways. How it used to be— in the old days!
Afterwards, Deran talks with domesticated Craig about their mom’s concerns. He thinks it’s Smurf being pissy about the job they did with Frankie. He also gets a look at the new life Craig and Renn (Christina Ochoa) are living , curious about what’s going on between the two. That afternoon, Craig breaks into Frankie’s storage facility to get her attention.

Younger Janine (Leila George) and the crew planned on robbing a hippie commune. The score would be risky, like any other job, albeit unpredictable. Manny (Rigo Sanchez) felt bank robberies were better because it’s what they were used to, but Colin (Grant Harvey) kept on having his lady’s back. They would eventually pull the heist. In the process, Jake (Jon Beavers) got shot in the arm. And there was a reason Janine wanted to pull that job. She had unfinished business with a rapist living there, an old friend of her mother.

Soundtrack note: “Bad Machine” by Dark Stares plays while Craig does a little B&E. “Spike Wand” by Ned Garthe Explosion plays when Frankie shows up at the storage facility.

Things are bleak for Frankie after what Craig pulled. She can’t get any work from all the people connected to her bougie friend. She reveals she’s only ever been trying to “get in with Smurf.” Despite any feelings she claims to have, she was always working an angle. No surprise. Craig could’ve taken the hint a long while ago, if he were truly paying attention. This woman was never to be trusted.

Smurf is trying to suffer through the painfully boring talk with other people her age at chemotherapy. Not her scene. She storms out when she can’t take it anymore. Outside, J has tracked grandma down. He knows she’s doing chemo. And he doesn’t tell Angela about it when they talk again, either.
All the family secrets are unravelling. At least Janine gets her licks in by knifing the tires of a fellow cancer patient. Small victories, right? What a horrible person.

Craig’s concerned about Renn dealing drugs while pregnant, not to mention Jack’s bust making things difficult. She sells to a “select group of customers” and isn’t scared of getting caught. He’s trying to help plan ahead, for after the child is born when cocaine won’t be safe to keep around. She doesn’t have an optimistic view of the future or herself.
Pope has another MMA fight. He lets Angela tag along in spite of not wanting her to see him that way in a raw state of violence. That night, he also confides in her about his mother’s secretive illness. 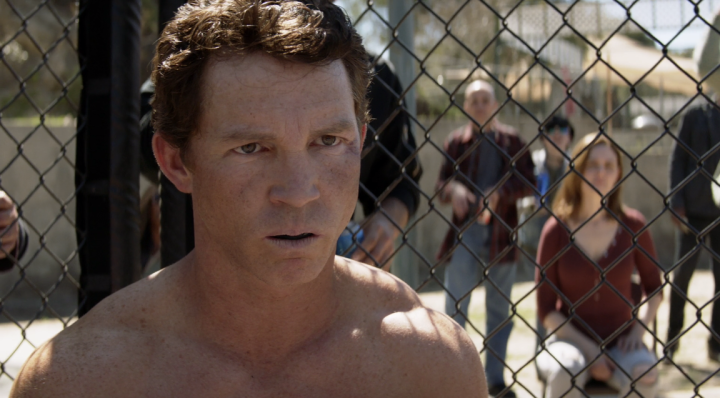 At the bar, Deran receives an unexpected visit. His heist pal Colby (Matthew Fahey) is wondering why Adrian didn’t get busted along with Jack. A sketchy conversation. Colby suggests he might let Pope know— unless he gets $20K. Extortion isn’t the safest bet when you’re dealing with a Cody. Instead of forking over cash, Deran shoots Colby dead in hopes of protecting his lover.
GOD. DAMN.

He’s never been a cold blooded-type. How far will he go to keep Adrian safe?
Now, he turns to his older brother, calling Pope down to help him dispose of the corpse. What an episode! Wow. Never saw things getting this crazy re: Deran and Adrian’s situation. Adds a whole new layer to the madness already swirling around the Cody family. Love the relationship between the two men, and this latest wrinkle in their lives only makes it more complex.

“Know Thy Enemy” is next time.