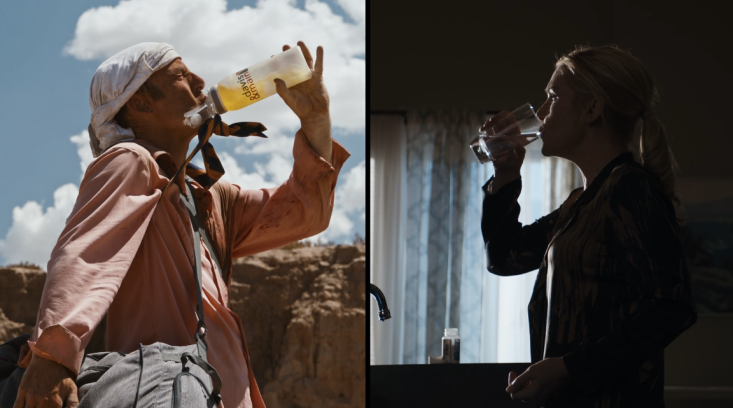 While Kim sits around worrying whether her new husband Jimmy has gone too far Saul and gotten himself killed, as Jimmy treks through the desert with his bottle of piss to drink and Mike behind him. Great juxtaposition of shots where Kim has a nice fresh glass of water and Jimmy takes a swig of his own urine. Is this the kind of life she really wants to live? Meanwhile, Jimmy’s gotten service finally and calls Kim to let her know he hasn’t been hacked up and strewn across the border, and she rightly breaks down.

Mike and Jimmy wait until they’re picked up by Tyrus and Victor. The mess left in the desert will be cleaned up, “like it never happened.” Then there’s Jimmy and Mike needing to come up with a proper story so everything fits nicely. The lawyer has to carry those bags filled with $7-million in cash to the bond office, where the whole staff has to get counting— there’s even some extra. Certainly doesn’t look on the level to anybody, and definitely not to the prosecution. We can see Jimmy continually burning bridges in his personal life and the world of law, all to make a big payday.

Lalo’s out and wants to know about all the trouble at the border. This gives Jimmy a chance to reel off the story he and Mike came up with, and it seems Lalo has no idea about what really happened down there. He’s a “friend of the cartel” because of this, but, as we already know it leads to terrible things in Breaking Bad, and has already caused terrible things to happen here. More than that, Jimmy’s now concerned when he finds out Kim went to see Lalo, worrying him about what his line of work will mean for his wife. He tells her firmly later: “You don‘t see Lalo, I see Lalo.” Everything feels a little darker when Kim sees the money, as well as the travel mug she gave Jimmy that now has a bullet hole in it. 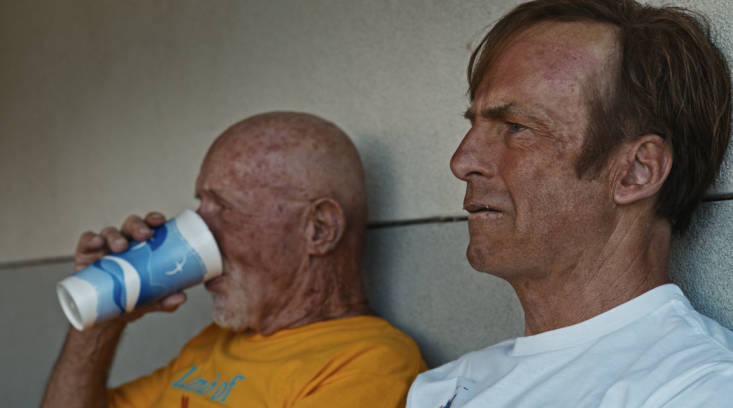 “That’s right— all by myself.” At Los Pollos Hermanos, Gus hears everything from Mike. His right-hand man explains there were tattoos on the men he killed, like a tattoo he saw before belonging to “some Colombian gang.” Mike draws the symbol for Gus, who recognises it. The chicken man is sure the men were hired, and he’s pretty sure it was Juan Bolsa. He calls Juan about Lalo and they have a tense, veiled conversation. It only makes him more sure of what he knew already. And he’s also realising they have to be more secretive about what they do from here. Aside from that, Mike brings up Nacho and says he’d like to cut the guy loose. His boss won’t let Nacho go just yet. Simultaneously, Lalo is visiting Hector to talk about the next step of their cartel plans and how they’ll keep fucking with Fring.

Jimmy’s not well after his traumatic trip into the desert. Just listening to Kim making juice and spilling some on herself sends Jimmy into a moment of PTSD flashback, where the orange pulp looks like splattered brains and the juicer’s noises remind him of popping gunshots firing all around him. Of course he hasn’t told his wife the full extent of what went on, so she doesn’t have the full picture. The couple try to sit and watch TV together, but Jimmy’s mind is elsewhere. Then he gets a call and has to go, lying to Kim about why he’s leaving. She already knows something isn’t right and she tries to tell Jimmy he can talk to her about anything: “No judgements.” Jimmy says he had to drink his own piss and that’s what’s been bothering him. Just another lie, and Kim knows it.

At work, Kim is having another crisis of conscience. She looks at the shelf of accomplishments behind her desk and morality weighs heavy on her. She goes to Schweikart right afterwards and has a quick conversation before leaving— she’s made the sudden decision to quit her job. The only thing she takes from the office is that sentimental cork from the bottle of Zafiro Añejo that she and Jimmy once drank.
At home, she surprises Jimmy with the news. He’s not sure why she’d quit. She claims it’s a matter of prioritising what means most to her, especially after Jimmy’s recent situation. She wants to go back to pro bono work, the reason she fell in love with law in the first place. It’s surely, in part, because of the immorality she’s seen Jimmy fall into, trying to prevent herself from going down the “bad choice road.” Again, Jimmy’s worried about money over anything else. Jimmy’s taken one on the Saul chin in court and he’s reeling. His brain isn’t in the right place. He calls Mike and has a conversation, wondering how long until the trauma will wear off. His whole life has been affected. Mike says one day the memories will fade and he’ll forget, being a seasoned veteran in this game. He also expresses remorse for what happened with the man at the travel agency. Jimmy keeps on grappling with the morality of helping Lalo, and Mike explains it’s “not the end of the story.” More and more, the lawyer sees the error in his ways.
But it’s too damn late— some roads, once you’re on them, you just can’t get off.

Near the border, Nacho brings Lalo to where he’ll be picked up. He’s about to head off when Lalo wants to go back up the road again. Mr. Salamanca wants to go for a drive and see if Jimmy’s story checks out about the car breaking down. Uh oh. He finds the car, along with bullet holes in the wreckage, peering through it the way Kim peered through the coffee mug bullet hole. This isn’t going to be good, for anybody.

Jimmy receives a frantic call from Mike telling him to leave his phone on and lay it down. Because he and Kim have just gotten a visit from Lalo, who wants to discuss what went on near the border. A scary moment seeing a Salamanca stroll right into their living room and assert dominance this way, showing the direct collision of worlds that’s about to become commonplace in Saul’s existence. Lalo wants Jimmy to tell him everything again, now aware of what really occurred to the car. The gravity of the moment starts setting in when Lalo makes Jimmy recount the story once more.
All the while, Mike’s got his sniper rifle ready again. He takes aim at Lalo through the window as Jimmy keeps repeating his desert ordeal. Jimmy pleads to get Kim out of there, knowing things are spiralling quick. Soon, Kim blows up at Lalo and she’s getting closer to danger with each second. Somehow, some way, her tactic works. Lalo leaves without any violence. That doesn’t mean Jimmy and Kim are left unmarked by this conversation. And outside, Mike lets Lalo walk away back to Mexico. A stunningly unsettling episode. So many things coming to a head.
How will the finale go down?

“Something Unforgivable” is next.