* For a recap & review of the penultimate episode, “A Voice in the Dark” – click here
* Hopefully we’ll get Season 4! Fingers crossed. 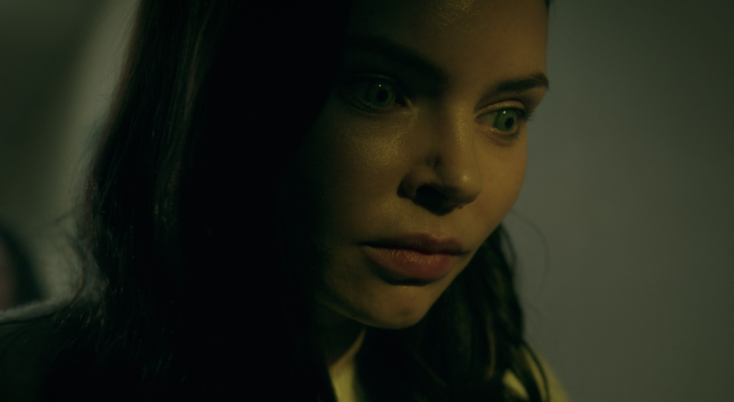 Chaos has erupted everywhere across Bristol Cove. The hospital continues filling up. Helen and Rick have also arrived. She has to let Ryn and Ben know about Hunter making off with Hope. Elsewhere, a full-fledged search party with helicopters is underway as the town looks for Sheriff Dale Bishop, and Maddie desperately takes part, hoping they’ll find her father still alive.
And at a secret location, Tia meets with Hunter and comes face-to-face with Hope, “the first born in many tides.” Surely her terrifying plan’s going to put the child to use in some way. Only question is, has Hope become strong and independent enough to rebel against Tia and her pissed off army? The little mermaid is already proving she won’t simply fall in line with whoever wants her to do it. Or, can Ryn save her daughter? The military are now seeking out Ryn, who’s glad to lend them a hand, especially if it means rescuing not only the town but also Hope. One good thing? Robb’s turned up with a recording from his tribe’s echo chamber. That’s at least SOMETHING positive. This pulls Xan out of his coma, at least for the time being.

In the KFGT newsroom there’s an important package brought to the editor-in-chief.
Inside is a flash drive containing Tia’s terrorist message to the world. And the same package has been sent to countries around the world. She’s turning nations against each other, sowing seeds of discord while she enacts the remainder of her plan. In the meantime they’ve got to use thermal imaging to try tracking Tia like they’d done to Ryn, sort of a reverse Predator situation. Not to mention Ted’s realising he’s seen Tia before when he fell in the water a while back. There’s soon a thermal hit on the radar, sending armed military personnel into a warehouse. Ryn rushes inside worried that it could be Hope, and there they see it’s Hunter, chained to the floor. They figure out Tia is setting a trap to lure Ryn. That’s fine with Ryn because she’s a bad ass. She makes clear to Hunter there’ll be consequences if Hope’s harmed.
Xander is back to his old self, which means he’s taking charge. He and Deputy Marissa are going to go looking for the sheriff while he sends Helen and the others off to do their thing as a team. Helen goes to see Ted, asking for his help to setup a treatment centre in the Pownall warehouse so they can start to help Bristol Cove residents with the effects of the siren’s song. At home, Cami is having a vision of her mother Donna. The spirit of Donna explains to her, and the others, that Ryn’s in need of their help. The mermaid crew get a little hand from Calvin and his boat, too. On land, Ted’s efforts have made a difference. He may actually be coming around once and for all.

On the water, Ryn and Ben are ready to go after Tia and find Hope. Looks like he’s going to help his partner under the ocean. Ryn’s willing to sacrifice herself for Hope, so long as Ben can get her daughter out of there while she deals with Tia. Ben takes this moment to talk about “living together as a family” with Ryn and Hope, having dreamed of it. Maybe it’ll be a reality if they can get through this madness.
So, underwater the couple goes. Ben soon reaches a locked up Hope, and Ryn joins her tribe to face off against Tia and her own merpeople. Unfortunately Tia has a large army. That is, until Ryn’s tribe is joined by many more from Robb’s tribe. Thus begins a MERMAID BATTLE! Ben and Hope are busy working together to get out of there safely. He distracts a few mermaids to let Hope get away. In the midst of the big battle, Ryn thrusts her spear through Tia. The fighting stops, as all the merpeople bow their heads to the dominant mother of the tribe.

Deputy Marissa and Xander find a boy on the road whose mother nearly crashed after the attack. The kid mentions a sick policeman who went into the woods. Xander goes searching and Marissa brings the woman and her boy to the treatment centre. He walks deeper into the woods and stumbles across Dale’s body. Maddie winds up walking into the middle of the scene, horrified to see her dad is dead. Xander and Robb do what they can to offer her comfort. In the aftermath, Ben is missing. He could be lost, or, worse, dead. Helen can’t help fearing the worst. Ryn holds out hope she can find Ben once more. She also explains both sides of Tia to her daughter when Hope asks questions. She talks about how Tia “lost all hope in humans” because of what was done to her. A very measured conversation, particularly how Ryn insists they’ll continue to make the world a better place: “But we‘ll do it with love.”
And Maddie mourns the loss of her father. Will this change how she feels towards the merpeople? Will she let her loss taint the humanitarian in her? In the absence of Sheriff Bishop the new lawman’s star is being pinned on Xander. Maddie’s taking a trip across the world with Robb to do important work, even if Ben’s nowhere to be found. She insists it’s only temporary. Ryn understands Maddie needs to get away from Bristol Cove a little while to grieve. Right now, everything’s a little broken. Maddie tells Ryn she needs to let Ben go, but the mermaid is sure Ben will come home, one way or another.

We’re given a vision of that dream family Ben saw. A heavenly white house. Ryn cooking as she and Hope wait for Ben to get home. The ultimate dream of happiness for the human-mermaid lovers. Sadly it remains, for now, just a dream floating in the ether. We see a shot of Ben floating away into the light like he’s dead. Is this the end for Ben? Let’s hope that Siren will give us Season 4. Anything else would be CRUEL. This show really knows how to hammer things home with emotion and intensity, and it’s one of the strongest parts of the whole series, time and time again.
What a gut-punch finale.