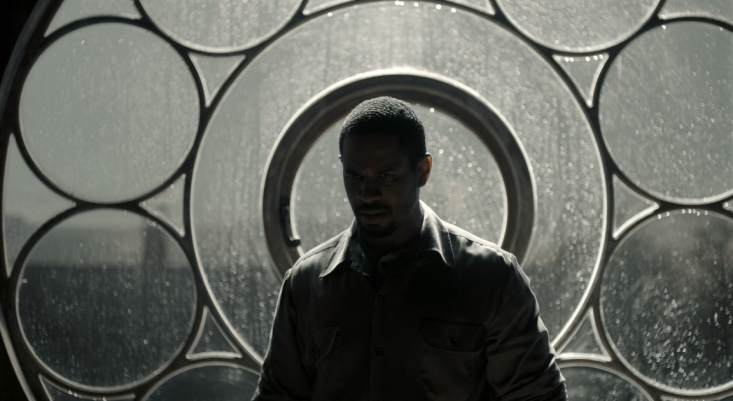 The town of Littleton is mourning the death of its mayor, Trina Grant. She’s survived by a husband, Jason (Damon Wayans Jr.). Her successor is a colleague, John Conley (David Krumholtz), who was working against her on a big deal for a highway, which is now, in the wake of Trina’s death, going ahead. Is there any foul play involved? There’s nothing suspicious outright, but my mind goes right to something fishy.

A year later, Littleton is moving on, and it’s falling apart without Mayor Grant.
Jason lives above the church house by himself now. He’s living a bit of a depressing life. He doesn’t feel any closer to God just from living there. Pastor Nichelle del Rio (Paula Newsome) lets him stay there and he tends to things around the place. She’s a kind of shoulder for him to lean on. They both loved Trina. But the pastor urges him that they have to “move on.”
While Jason clears junk out of his attic room he finds a miniature replica of the town. The model’s eerily accurate, down to cracks in the ground. Jason winds up a piece on the side which turns on electricity to the town, lighting everything up. The church and the greenhouse where Jason works on the roses is there. Creepier still is the fact that Jason can see someone in the window of the little church. Is it him? He sprays the window to clean it and outside rain falls suddenly. Coincidence? Nah. The Narrator knows better, that this model of a small town is gateway through the Twilight Zone, and things are about to get stranger for Jason.

People in town are talking about the “Biblical” rain that came out of nowhere today when Jason is at the diner. He hears the owner of the diner (Natalie Martinez) talk about needing to paint the place. So in his little fix-it book he includes that on a list of things to be done. When he goes home he uses nail polish to put a coat of paint on the tiny diner. The next morning, everyone, including the owner, is amazed at the new colour. Jason gets a taste of what it’s like to have power even Mayor Conley can’t touch— the power of a god.
Later, Jason sees more things wrong. He notices the performative suggestion box put in place by Conley is full, too. He goes about looking after all the suggestions himself, spending his night working on the model town to fix all the various infrastructure troubles and other problems people have been worried about for so long. Meanwhile the mayor’s out pressing for answers about the diner, acting like a shithead.

The problem is that Mayor Conley gets all the credit. That burns Jason up.
How long can Jason continue to let Conley reap the rewards? It’d be better if nobody gave ANYONE credit, but for Conley to get it feels like an extra poke in the eye for Jason. For now, Jason keeps up the work like he’s been doing. And his next project is a massive sign to draw more people to Littleton. It works well. The town has never seen such an influx of people coming off the new freeway.
Yet, again, Conley gets the credit. It’s soon election time, too. Pastor Nicky doesn’t quite attribute it to the mayor. She tells her congregation that, as her husband says, it’s all the work of “El Ayudante” or “the Helper.” Nevertheless, Jason continues to be angry so he drops a boulder on the mayor’s car. The mayor blames it on Emilio, the son of the woman who owns the diner, until people see him being a dick. He spins this into an impromptu speech, getting lots of applause. Just pisses Jason off more. That night while Conley’s walking the street Jason places a tarantula in the model’s streets, and it’s as horrifying as you’d have imagined. After a good scare the spider’s yanked out.

“It’s not about the who”

A few more lights on the Littleton sign pulls too much power. The whole town now goes blank and shuts down. Business is at a standstill. There are health concerns amongst the residents. Mayor Conley’s stumbling through things without actually even knowing how such a “serious infrastructure problem” came to be in the first place. Now, he’s facing a tricky situation because people have laid responsibility for all the Helper’s work at his feet, and they’re angry he’s not snapping his fingers to fix what he’s fucked up. Conley turns people against Emilio for drawing everything that’s been going on in Littleton, but the boy’s mom turns them all back onto the mayor again, even angrier than before. The fired up mob wants blood.
So after everything, Jason admits to being the Helper. He apologises, then everybody wants proof of what he’s done. He takes some matches upstairs to the model town and lights a fire in the middle for people to keep warm. Mayor Conley gets a look at the model and only sees a “New Vegas” in their future, thinking of the capitalist implications of such a magic device. When a fight breaks out the model gets knocked around and the whole thing crashes to the floor, splitting apart. 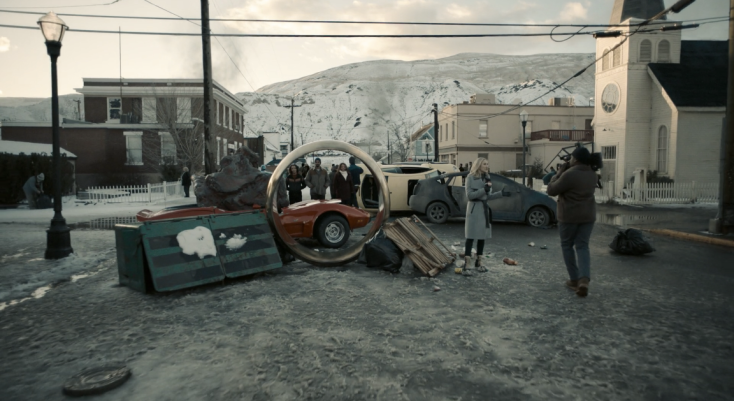 In the aftermath, the real Littleton’s wrecked. Thankfully no one was seriously injured. The town is a mess. Jason’s stranded wedding ring does leave Littleton with good progress because it’s the largest piece of “unbroken gold” ever found. There may be a nice future ahead of everyone, if everyone can work together. Because when we rely on just ONE person— especially a man— rather than the COLLECTIVE, power can do awful things to people. Sound familiar?
Loved this episode. Absolutely adore that this chapter of Mr. Peele’s The Twilight Zone was written by Steven Barnes and Tananarive Due. Another of my personal favourite episodes of the series.