Things are much different in the light of day once Leti, Uncle George, and Atticus wake up after their wild day/night getting out of that sundown town. I love the way anachronisms are a part of the series already since Ep. 1 and it continues here as the opening montage is perfectly set to the intro for The Jeffersons. Leti and George are both thrilled to enjoy the fashion and book collection respectively. Yet Atticus can’t forget what they’ve been through already. It’s almost like the other two are caught in a spell while Atticus feels more aware of something strange happening.

A strange bell rings, calling the trio out of their rooms. They’re met by William (Jordan Patrick Smith), the one who welcomed them earlier upon arrival. Atticus wants to know when his father’s supposed to get back from Boston. All William can tell him is that Montrose left to see a lawyer with Ms. Christina Braithwhite (Abbey Lee) a couple nights ago. No idea when they’ll return. Until then, William intends to treat Atticus “like family.” They’ve got to stay there at Ardham Lodge. Creepy place. No phones, as per Samuel Braithwhite’s (Tony Goldwyn) doing after inheriting the land. The original owner of the lodge was a distant cousin, Titus Braithwhite (Michael Rose). Titus was in shipping— “code for slaves,” Leti says. The original lodge burned down in 1833 and Titus died, along with almost everyone else in the lodge. But there was ONE survivor…

Atticus is uneasy, as is Uncle George. They know being Black and getting invited into white houses isn’t the usual way of doing things for white people in the ’50s. Then we start to see Leti can’t remember what happened to them the night prior. Seems like Uncle George can’t remember, either. Atticus is the only one of the three who recalls the monsters they all witnessed. He’s freaked out, but then George lets them know they’re being watched. Is it William? Or somebody else?
Things unravel a bit when they find their car back in good shape again. Atticus knows there are sinister things occurring around them. He wants to get out of there and into town, so the trio head off. Leti wonders if Atticus is having some post-war troubles with “shell shock,” offending him. Out of nowhere they hear the whistle he remembers calling the monsters off. He finds a woman with angry dogs. It takes the name Braithwhite to calm things down. She gets nasty racist without saying anything too overt. The eerie silo she guards is where Atticus thinks they’re keeping his father.

That evening, George remembers something Atticus’s mother said about her great ancestor, “a slave named Hanna” who escaped after a fire. Did Titus, “notoriously kind” to his slaves,” rape Hanna and get her pregnant? Seems likely. George, Leti, and Atticus find themselves surprised by monsters in the woods after dark, only to be saved when Christina arrives on horseback with one of those whistles, running off the creatures. The lady with her dogs is there, too. She escorts the trio back. Also, Leti and George immediately forgot the monsters and what happened this time. Uh oh.

Back at the lodge, Atticus witnesses Christina up to some gross, primitive surgery aided by someone in a cloak. Samuel’s the one being worked on, soon stitched up and on his feet once more. He gets up and shows Atticus a painting by Josef Tannhauser, titled Genesis 2:19 after the Bible verse in which Adam names all living creatures. Samuel sees it as a matter of station, of natural hierarchy. After that, Christina blames “that stupid, meddlesome, troublemaking bitch Eve” for the Fall of Man. It all boils down to Samuel, seeing himself as Adam, hoping to find a way to Paradise.
Meanwhile, George goes for a walk and finds all sorts of books. One’s called By Laws and Precepts of the Order of the Ancient Dawn— sounds like it’s based on a real secret society, the Hermetic Order of the Golden Dawn. 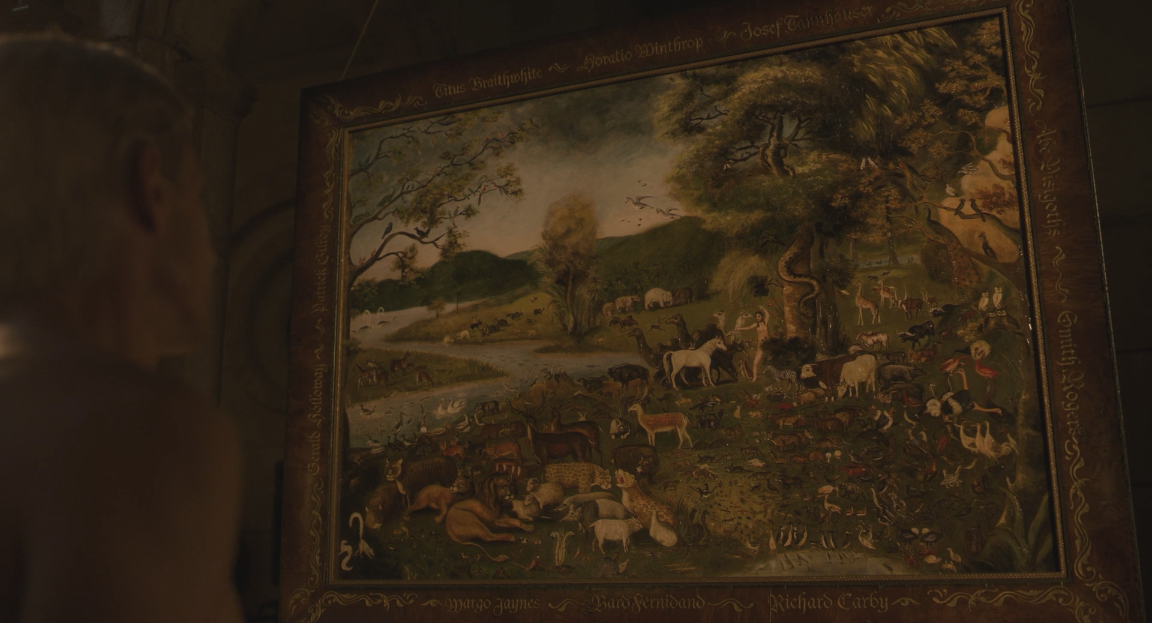 “He put everything in its place”

Atticus barters with Christina, attempting to get her to remove the spell he knows has been placed on Leti and George. He wants that or to go to his father. She agrees to remove the spell. That comes as a price, though. Atticus rushes to leave his room when he hears Leti and George going mad, remembering what’s happened. But he can’t go, another spell preventing him from leaving his room. Christina rushes off to the barn where a cow’s experiencing a breached birth. She puts her hands inside the animal and drags the calf out. Only it isn’t a calf, it’s some kind of monster.

Eventually Atticus finds a way out and gets to Leti, who’s terrified and apologetic for not remembering earlier. She calms down and they talk about the Bible being “full of demons and monsters.” She wants to believe they’re only stories in a book. Unfortunately they’re experiencing all of it for real, for themselves. A bit later, Atticus uses morse code to talk through the walls with George. Then Atticus gets attacked by a woman, Ji-ah (Jamie Chung), charging out of an armoire— a vision of his time in the Korean War? In his room George is seeing a vision of Dora (Erica Tazel) like she’s there with him, alive again. And if Atticus is fighting a Korean ghost in his room, then how could he be getting naked with Leti in another room? Leti’s quickly confronted by the fake Atticus’s snake penis, just like the Adam and Eve painting she saw moments ago.
The fuck is going on this white house? All the bougie whites are watching the three Black people struggle against their horrific visions, like peering into TV screens except their magic portals. Soon, another bell rings. The trio come out of their rooms, shaken by what they’ve seen. George knows it’s white people trying to break them. He pushes Atticus and Leti to be stronger, to remember who they are, not who/what white people dictate.

Later, at a male-only dinner, George and Atticus are brought in amongst the bougie white guys. William tells them they’re meant to be there, to ignore the other men. After that, Samuel arrives talking about “sacrifice” and the original intentions of his cousin Titus. Remember earlier when he had an organ taken out? Well, he’s offering a piece of himself to the others; literally. Everybody’s being served what looks like kidney or liver. George can’t sit quietly. He gives the white lads a lesson on Black history. He talks about their order, the Sons of Adam, and how it wouldn’t have let a great man like Prince Hall in, unlike the Freemasons. Nevertheless, there’s a loophole. Because anyone directly related to Titus would be allowed into the order— “Sons Among Sons,” as it’s called, who can actually give orders to other Sons. George is pretty sure Atticus is the last blood heir of Titus. So, Atticus orders everybody except Samuel to get out. Following that, he orders Montrose to be returned to him. Samuel gets more than a bit racist before walking out.

George and Atticus go straight for the silo, finding their way down into the basement. They locate a flask belonging to Montrose. So convenient! They get stopped by the angry dog lady and her shotgun. But the lady gets knocked the fuck out by Leti, rushing in fast. The Count of Monte Cristo, Montrose’s favourite novel, gives George an idea. They check for loose bricks in the wall, discovering a tunnel dug behind it. Elsewhere, we watch Montrose himself, cuffed, crawling out of the earth itself, reborn. His brother, his son, and Leti are there waiting for him. He’s not happy they came to find him, though. He only wrote that letter because he was made to, but regardless they all head away together.

They’re driving over a covered bridge when a magic wall pops up, like the one earlier preventing Atticus from leaving his room, and it crashes their car. A great bit of music here with “Killing Strangers” by Marilyn Manson playing as Samuel and Christina show up. First thing ole Sam does is put a bullet in Leti’s stomach. Atticus goes to her, begging Christina to help them. But Leti’s fading fast, then she’s dead. Sam blames it on Atticus and also fires another bullet into George.
Later, they prepare for a ceremony. Christina says Samuel hopes to open a portal to the Garden of Eden. Thankfully, both George and Leti are okay after all. That comes at the price of Atticus offering himself over to the Sons of Adam for their ritual. While George and Montrose talk there’s a revelation: Atticus may not be the latter’s son. Hmm. So many secrets.

Wonderful anachronisms abound! Gil Scott-Heron’s “Whitey on the Moon” plays in the background while the Sons of Adam ceremony begins, a combination of modern electricity and ancient ritual. A great juxaposition of elements, as Gil’s song hits on the reality of how progress for white people never means progress for Black people, and Atticus gets used up for the white man’s purpose. But through the flame and electricity Atticus sees a vision of his slave ancestor, Hanna. And her presence fights back the magic of Samuel and his order. It also starts collapsing the lodge, forcing George, Leti, and Montrose to try fleeing. Atticus screams and lets loose a power that turns Samuel and the other Sons into ash. He gets free in time to run, Hanna showing him the way out of the lodge before the whole thing comes down on his head. He finds Leti alive again waiting for him. Sadly, George is dead in his brother Montrose’s arms.

Soundtrack: “River” by Leon Bridges plays in the last moments

All this in Ep. 2? Where does Lovecraft Country go from here?
I have faith, but I’m not entirely sold on the series yet. Hoping that changes.