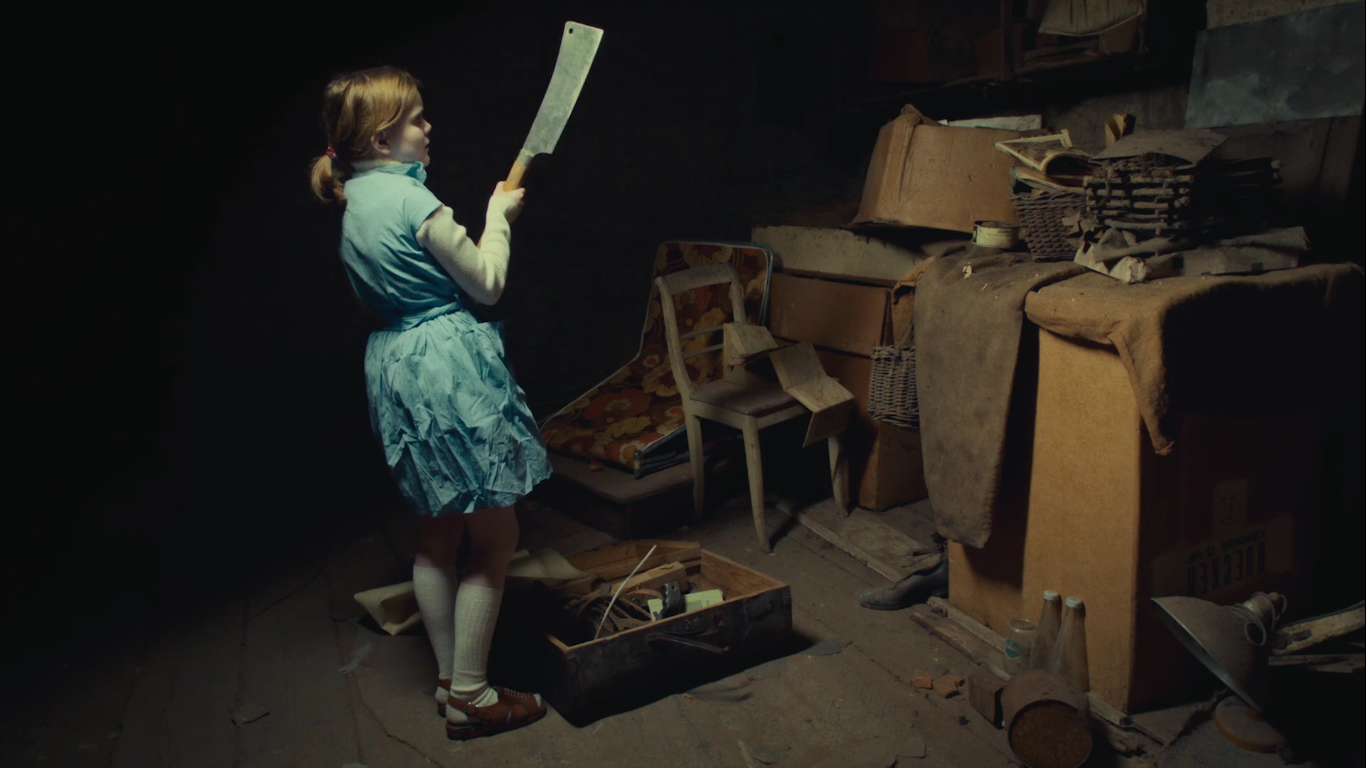 The first article I wrote for this year’s Fantasia Festival was on Michael Venus’s new film Sleep. In that article I referenced Sabrina Mertens’s debut feature Time of Moulting, mentioning they tackle similar subjects albeit in drastically different ways. Venus goes for surreal horror, whereas Mertens created a stunning drama with horrific undertones by staging 57 shots, best described as artistic tableaux like haunting paintings in motion.

Mertens tells the story of Stephanie (Zelda Espenschied / Miriam Schiweck), a young girl in Germany growing up during the 1970s. She lives with her unstable mother (Freya Kreutzkam) and father Reinhardt (Bernd Wolf) in a semi-dilapidated home brimming with books, old papers, clothes, and other clutter. The father hits his daughter and taunts her emotionally. The mother may be committing worse sins. In the house’s repressive silence, Stephanie’s intellectual and sexual development goes terribly wrong.

After watching Time of Moulting it felt like I’d seen something I wasn’t supposed to see, as if Mertens was letting me in on a secret that dared not to be spoken aloud let alone shared. Because the film deals with heavy issues on a personal and national level. On the surface, the story deals with how traumatised people become traumatised parents and pass that trauma onto their children. Another layer deep, the story taking place during the ’70s in Germany is significant, opening up a discussion of generational and national trauma, as Stephanie’s parents carry with them the traumas of their country’s Nazi past and, unfortunately, infect her with them, too.

The immediate, disturbing interpretation of Time of Moulting is Stephanie represents a child whose natural development gets warped by her parents, to the point her sexuality becomes an intertwined passion for death and sex. Stephanie’s left to her own devices to decipher the symbols of the past she finds in her Gothic home. The house’s repressive nature, due largely to her mother, and the potentially depraved influence of her mother combine into a confusing cocktail of emotional states Stephanie has to navigate alone. As her libido develops we see her as a young woman after the story’s 10 year jump with no guidance to help her comprehend what is/isn’t healthy. She develops a whole private erotic world bound up with death and violence. By the time her mother actually tries talking to her, after finding one of her sexually violent sketches, she’s too far gone into that private existence where a horrific sexuality has blossomed.

“Born stupid and learned nothing” 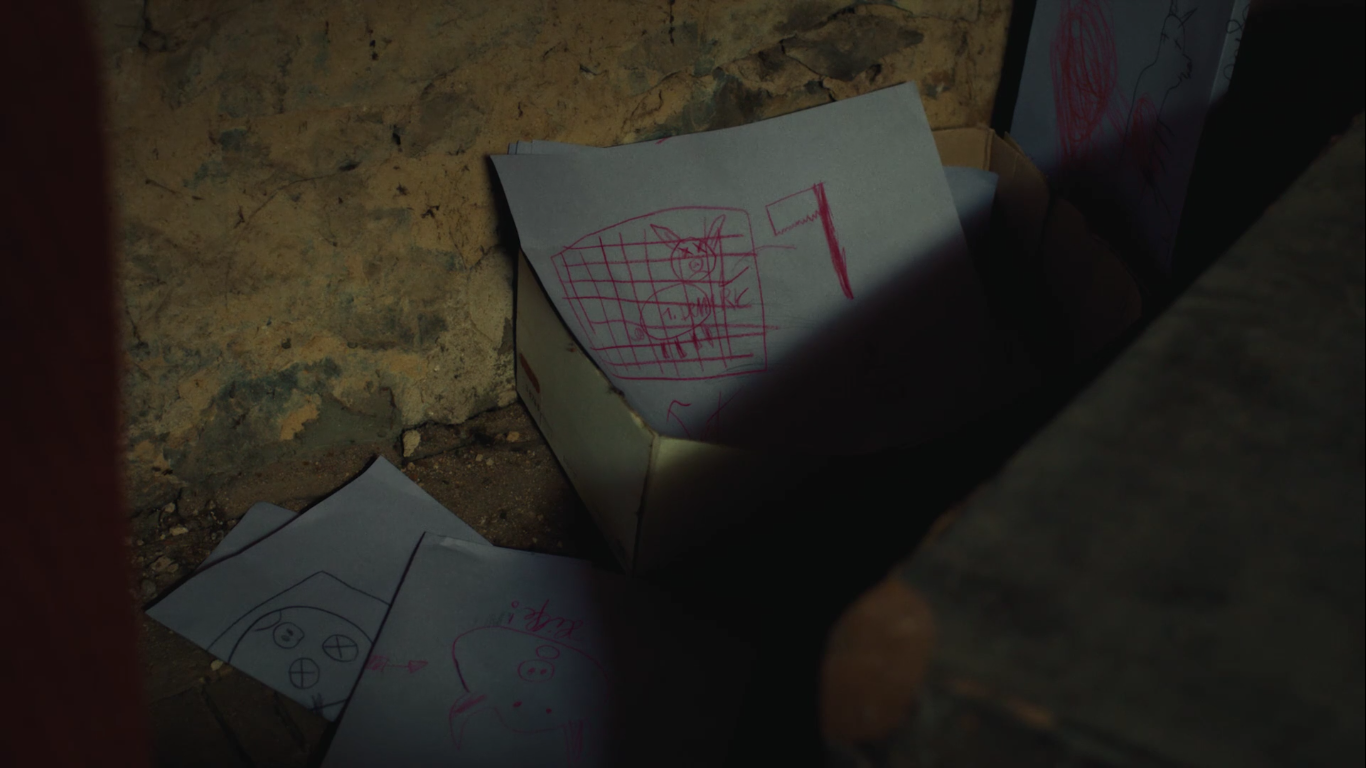 Mertens cleverly submerges the shadows of Nazi Germany in her screenplay, just as the mother and father have submerged that piece of their past, burying the memory of grandpa’s slaughterhouse in the recesses of their Gothic home. What does the family’s slaughterhouse past have to do with Nazis? A fascist pig isn’t only a fun insult to throw at a Trump supporter, it’s a reference to the agricultural industry under Hitler’s control. The Nazis wanted to be a truly independent nation; one component of that involved agricultural production. Hence, developing fatter pigs via genetics to create a domestic source of fats. So when Stephanie digs up that old box in the shadows of her house and sees a pamphlet about “fattening pigs,” she’s actually peering right into her family’s own connection to Nazi history.

There are other subtle instances of Nazi Germany looming over the mother and father like a perpetual shadow. The mention of Marika Rökk as being grandmother’s favourite back in the day directly connects to Nazi rule, as Rökk wound up a cog in Joseph Goebbels’s propaganda machine. The use of Nazi propaganda is important in the film— the pigs pamphlet could be seen as an example, too.
At one point, Stephanie lies in bed while listening to her mother read “Hansel and Gretel.” During the Nazi era, Goebbels used several fairy tales made popular by the Brothers Grimm as literary ammo against the Jews. For instance, Little Red Riding Hood’s journey to grandmother’s house becomes innocent German women being attacked by a Jewish wolf, or Cinderella’s beauty compared to her stepsisters becomes evidence of Aryan purity. It isn’t hard to imagine Nazi propaganda using the brother-sister duo of Hansel and Gretel as representations of the German people, leaving the cannibal witch to stand in for the Jews— all the more upsetting in the Nazi version then when the children push the witch into an oven. Neither is it a coincidence various fiction writers have already used “Hansel and Gretel” as a metaphor of the Holocaust.

The way the mother and father parent is reminiscent of Nazi parenting, making obvious how they’ve passed on the trauma of their past to Stephanie. The Nazis wanted children who were tough, without emotion or attachment to others— not unlike Stephanie— and they encouraged Nazi mothers particularly to withhold affection. Reinhardt’s certainly keeping up this tradition. He calls Stephanie a “brat,” smacks her around occasionally, and mocks her as “born stupid.” The mother’s carried on her trauma in a much worse way. One scene sees her asking— or, begging— Stephanie for a massage. The unbearably uncomfortable silence that lingers afterwards speaks volumes more than any dialogue could say. The mother otherwise refuses any presence of sexuality in the house, changing the channel when a love scene comes on, as if normal sexuality will harm her daughter and not the abnormal sexuality she seems to have introduced to Stephanie.

Reinhardt bookends the film by painting the same patch of wall in the first and last scene, epitomising the repression of their family home. It works as an allegory of attempting to ignore the past. Because, like the cracking of the paint, the past will continue to emerge unless properly dealt with instead of simply throwing a new coat of paint over it. Beneath, everything remains, and it’ll fester like a gangrenous wound beneath a scab that’s been prevented from healing properly. Like the paint, we have to scrape off previous layers so that we may start again fresh, beginning anew.

Even the title of the film, Time of Moulting, touches on this idea of change. Moulting is the shedding of skin. Here, we can take moulting as an attempt to shed the weight of the past. Yet instead of moulting this family’s overgrown its shell and hid beneath its shield, isolating themselves from the world. The mother and father have allowed themselves, and their daughter, to exist in a world of cyclical ruin and decay, a sick world governed by a past that’s never talked about and barely acknowledged. There’s likely no way out anymore for Stephanie. She’s been tainted forever by the Gothic trauma of her family home, and should she continue the family line she may, or may not, pass on that trauma to a whole new generation.