This year’s Rand Award candidates for feature-length films are each provocative, dangerous, exciting, and raw in their own ways. Randfilmfest’s motto is “And disturbance for all!” so why expect any less? The festival prides itself on being cutting edge and fresh, where old and new films on the fringe find a home to be celebrated rather than censored.
Randfilmfest considers nothing cinematic off limits.

The following films are Rand Award nominees in its full-length category.

From my essay on this gorgeous, shocking film by Sabrina Mertens:

“After watching Time of Moulting it felt like I’d seen something I wasn’t supposed to see, as if Mertens was letting me in on a secret that dared not to be spoken aloud let alone shared. Because the film deals with heavy issues on a personal and national level. On the surface, the story deals with how traumatised people become traumatised parents and pass that trauma onto their children. Another layer deep, the story taking place during the ’70s in Germany is significant, opening up a discussion of generational and national trauma, as Stephanie’s parents carry with them the traumas of their country’s Nazi past and, unfortunately, infect her with them, too.” 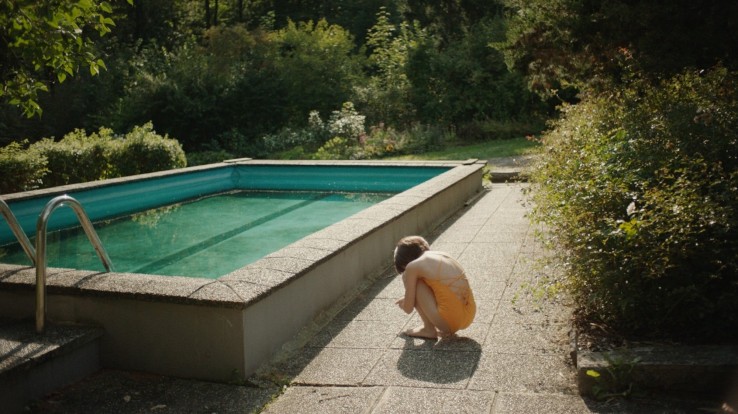 Sandra Wollner’s latest film, The Trouble With Being Born, is a 21st-century Pinocchio, except far more disturbing. A man called Georg (Dominik Warta) is grieving the loss of his daughter, so he constructs an android to bring her back to life. But he has sinister reasons to resurrect his daughter.

Wollner’s film has already been subject of controversy, as well as censorship, having been booted from the Melbourne International Film Festival supposedly due to the opinions of two forensic psychologists worried about the story’s depiction of child abuse. I’ve seen the film and, while creepy and more than occasionally nauseating, the screenplay by Wollner and Roderick Warich, explores ideas about technology, identity, and, yes, child abuse. An important piece of work. Just because some walked out on it elsewhere and Melbourne didn’t want to screen it, doesn’t mean it isn’t worthy of being shown.
And bless Randfilmfest for doing the lord’s work!

While Larry Clark’s Kids will also screen as part of the program, Henning Gronkowski’s Yung is also appearing here among the rest of the Rand Award nominees. These two films aren’t quite the same, though they explore at least some of the same topics. Whereas Kids displays a near complete lack of morality among friends, Yung looks at hedonism with an eye to focus on the friendship of four girls trying to navigate a modern day Berlin that’s as dangerous as it is liberating.

Nevrland is a tale of one 17-year-old’s anxiety and how it forces him to escape online. It’s across the internet where he meets a 26-year-old man. Their relationship takes them both on a journey of personal discovery. That doesn’t necessarily mean the journey’s an easy one, marked by sex, violence, and plenty of surrealism. A raw, existential story that touches on many themes, especially Randfilmfest’s Gold of the Youth. The meaning of life, sex, death— Gregor Schmidinger’s wonderfully strange, queer film has something for everybody, if you’re fucked up like me.

I have loved Fabrice du Welz’s work for many years. I first came to his films via Calvaire, one of the most unsettling horrors released anywhere post-2000. The great thing about du Welz is his ability to cross genres and try new things. His latest film Adoration is a dramatic thriller verging on total fantasy. 12-year-old Paul (Thomas Gioria) lives in the woods with his mother, and nearby is located a psychiatric hospital. One day, Paul meets the young teenage Gloria (Fantine Harduin), a new patient at the hospital. The two form a quick friendship, and soon Gloria convinces Paul to help her escape that place.
All of du Welz’s films have great atmosphere. Something about Adoration feels very different for his directorial style, yet it’s so evidently his work. It’s like a fairy tale of love, madness, hope, and imagination. The depiction of mental illness is intense and wild at times while never disparaging the mentally ill. The story doesn’t fall into saccharine territory, it’s never cliched or cutesy like so many other stories about kids, and du Welz never loses that unsettling twinkle which has become one of his excellent trademarks.

Every film at Randfilmfest hooks into the year’s theme. One that encapsulates so much youth and also issues the world is facing today is Carolina Hellsgård’s Sunburned. The screenplay follows 13-year-old Claire (Zita Gaier), whose boredom and neglect on vacation with her mother and sister in Spain pushes her to explore on her own. She winds up meeting a Senegalese beach vendor called Amram (Gedion Oduor Wekesa) and wants to help him escape a harsh life. However, she doesn’t realise that when their relationship gets more intense it makes Amram’s situation even harder.
The way the story encompasses youth, class, and race makes it the perfect film for 2020’s edition of Randfilmfest, as news around the world bombards us with young Black people being beaten and killed by police, daily reports of how much Jeff Bezos makes while preventing his employees from unionising, and more horror.

Andreas Horvath tells another important, relevant 21st-century story with Lillian. His film is a drama about an immigrant in New York, the eponymous Lillian (Patrycja Planik). She takes it upon herself to walk all the way back to her home in Russia. The film is based on an actual event in the 1920s, when Eastern European immigrant Lillian Alling attempted to do the exact same thing— it’s not known whether Alling made it across the Bering Strait to Russia after crossing through Alaska.
Horvath’s Lillian exists in current day, bringing about discussion of immigration today around the world. This film is quiet. Lillian doesn’t speak much if at all throughout, and the film was shot with no script, based on improvisations. A special atmosphere grows from the silence and spontaneity. Horvath chronicles the invisibility and gradual disappearance of a woman on the margins, a person seeking home, no matter the cost.