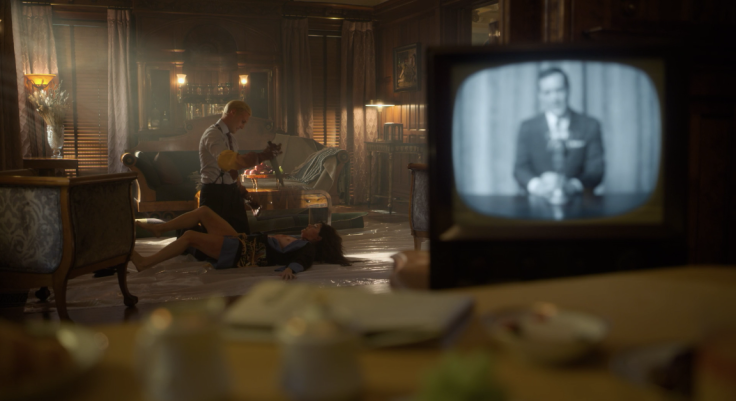 A woman wakes in bed as if she’s surprised by her own body. She struggles out towards the mirror and says: “Wake up, Ruby.” OH. MY. GOD. Is this the work of William? Poor Ruby’s left to wander the streets as a white woman. She tries telling people who she is but obviously nobody in a Black neighbourhood’s going to believe her. A young Black boy gets attacked by the cops, assuming he molested the white woman in her bathrobe. Ruby finally tells them the boy was attempting to help, thankfully getting the cops out of there before any Black people get seriously hurt. Quite a shocking race role reversal for Ruby. The police are taking Ruby home, they believe she’s a mentally ill woman trying to run away from her husband. And right back into William’s arms she goes.
He takes her inside and lays her out on plastic he’s prepared on the floor. Not a good sign. White Ruby struggles in pain, her body transforming inside. Then William sinks a knife into her abdomen, cutting her open before tearing apart the rib cage and gutting her entire torso. Jesus. William’s concerned with “metamorphosis” and what that might mean in humans as opposed to butterflies. He and Hiram Epstein were scientific pals, both into seriously weird shit. And then, William awakens Ruby from her sleep. The potion he gave her “mimics metamorphosis,” and this is magical, as well as terrifying, to her. She got a dose of white privilege, experiencing life from an entirely different perspective. And maybe it’s something she doesn’t want to give up, in a world that treats Black as inhuman and white as human. Part of this sequence is set to what sounds like a monologue from Ntozake Shange’s For Colored Girls Who Have Considered Suicide / When the Rain is Enuf (1976).

Later, Ruby reminisces about the currency of whiteness, and whether it’s tougher being Black or being a woman— definitely toughest being both. She decides on using her identity as Ms. Hilary Davenport in order to go back for a job at the department store where she previously wanted to apply. The question turns to working with people of colour. Hilary does her best to give a pro-Black answer while not seeming suspicious to the white boss. He then offers her an assistant manager position. White Ruby’s got to get out of there before he body does too much strange stuff

Montrose is dealing with the aftermath of murdering Yahima. He tells Atticus and Leti that the two-spirit woman is gone. I’m still uncomfortable as a viewer about how Lovecraft Country treated a two-spirit Indigenous character, introducing her with no voice of her own, entirely naked, only to kill her off once she’s served the narrative purpose of its Black protagonist— the series did a disservice to itself by offering Black liberation from H.P. Lovecraft’s legacy partly at the expense of an Indigenous body. Anyway, Atticus beats Montrose pretty good, and that’s not really the answer. The young man has demons leftover from the war. That scares Leti. He seems like someone who doesn’t want to be that type of man. Hopefully he can contain it. Then again, he may need some of that anger on the journey ahead. For now he and Leti are getting intimate again. I already knew something was coming re: Montrose’s sexuality, after Tree’s comments about him and the security guard in the previous episode. Turns out that Montrose is, indeed, a gay man. He meets a friend in a motel room. They’re evidently far more than friends. They have passionate, rough sex together, even if Montrose still appears to have trouble accepting his own sexual identity. So much intersectionality happening in Lovecraft Country, from Ruby and Leti dealing with being both Black and female to Montrose struggling as a queer Black male in the 1950s.

At work, Hilary’s trying to impart some wisdom on the Black girl working there. She almost seems to resent the lady for not knowing about courses at the Frederick Douglass Centre, quipping about her “ashy” hands like a schoolgirl. We also see Hilary working on the other women at work, wondering if the boss has ever done anything untoward. She tries to shrug off the casual racism between the white ladies, though it’s tough. Should be a wild night out on the Black side of town now that her white co-workers want to go dancing.
That night, William has the real Ruby serving white people at a get-together. She gets called away by Christina, who tells her William’s the “rightful heir” to that lodge. Captain Seamus Lancaster tried to kill William, but Christina helped William survive. Now they’re going to take revenge on the cop by planting something in his office.

Atticus is investigating the same symbol as the one on the item handed over by Christina. He sees similarities to Chinese hieroglyphics. There are characters on the ring they found, too— they spell Atticus’s name in the “language of Adam.” He’s working on deciphering all sorts of cryptic, esoteric madness. He also has to explain to Leti that Montrose killed Yahima. That devastates her. She knows all of this magic is evil, whereas Atticus believes it’s how the magic is used. That doesn’t convince her.
When Ruby goes to plant the item in Cpt. Lancaster’s office she opens that eerie closet, seeing a man inside, bloody and stitched up, moaning in agony. She’s forced to hide in there when Lancaster and another couple men turn up. We also see that Lancaster has a big patch of what looks like Black skin grafted onto his chest!

Interesting to watch Montrose hanging out with his man, a drag queen, and a bunch of other Black queens. Nice to see D.J. Pierce a.k.a Shangela serving Lena Horne REALNESS. Monet X. Change is also in the audience at the drag show. Werk, mamas! Montrose watces his man in drag onstage and then they embrace, dancing together on the floor. This becomes a kind of watershed moment for him, as he realises he’s in a safe place, where he’s allowed to be a queer Black man unapologetically.

At a different club, Hilary and the white girls from work have got Tamara taking them out to the South Side. Things take a turn when Hilary decides not to take her Dr. Jekyll-Mr. Hyde serum— the episode’s title “Strange Case” is a great reference to the famous novella by Robert Louis Stevenson, The Strange Case of Dr. Jekyll & Mr. Hyde— and she literally comes apart at the seams, shedding all that white skin as the real Ruby emerges bloody from her white bourgeois shell. She’s in the right place at the right time to see her boss nearly rape Tamara, giving such a stark view of her experience in white skin versus the experience she knows in her own Black skin. Christina further presents the reality that privilege is power, and it can allow Ruby to be who she wants, uninterrupted. Will such power corrupt, Ruby? Or can she really use it to do good? She uses her Hilary identity to put the store manager in a compromising sexual position. She then rapes him with a high heel. To each their own, but as a survivor of abuse I personally hate when rape is used as revenge, even against rapists. Lovecraft Country‘s really losing me with its treatment of rape here as a weapon and also last episode’s disgusting disrespect of both two-spirit Indigenous people and Indigenous people in general. Yuck. Later on, Ruby sees William having his own metamorphosis moment. He’s bursting apart on the floor, his skin peeling until Christina breaks out from inside of him. The whole time it’s been Christina using William as a shell. Oh, my.

And what about Atticus?
He’s found out something shocking. But what, exactly?

Not sure how much longer I can tolerate the show when it seems to take steps backward every episode in fixing pop culture misrepresentations. I love how Lovecraft Country is tackling the legacy of its namesake, in regards to Black people. I really don’t like how it seems to toss other groups by the wayside, from two-spirit Indigenous folk to Indigenous people generally with the treatment of Yahima, to victims of sexual violence with rape being weaponised in a cheap moment of supposed retribution. Sad to see in a show with such powerful potential doing these kinds of things.