We’re in 1955 and Emmett Till‘s been murdered. It’s the hottest day of the year. Black people are in the streets mourning together. Atticus, Leti, and the rest are gathering for the public service. Black people chant “No more,” and young Diana’s learning how fragile the world is for Black kids, having known Till before his brutal murder— the boy’s nickname was Bobo to his friends and family. Meanwhile, Leti and Atticus lost track of Hippolyta when she disappeared in that flash of light.
Perfect use of Bananarama’s “Cruel Summer” in the opening.

Diana sneaks away from the wake and has everyone worrying about her. She sees a couple young Black girls laughing, eating ice cream, and it enrages her. She throws rocks at the girls and chases them off, disgusted by their nonchalance when every other Black person seems to be collectively mourning Emmett. Even Black-owned stores are closed in Till’s name. While Diana walks alone she’s confronted by a couple cops who evidently found her comic book back at the observatory, one of whom is Cpt. Lancaster. She gets grilled by the racist cops. Lancaster asks about “magic.” Then he begins to cast a spell while his partner marks the ground with chalk. Diana starts to choke then goes near catatonic. They leave her relatively unharmed, but humiliated, and potentially under a spell. 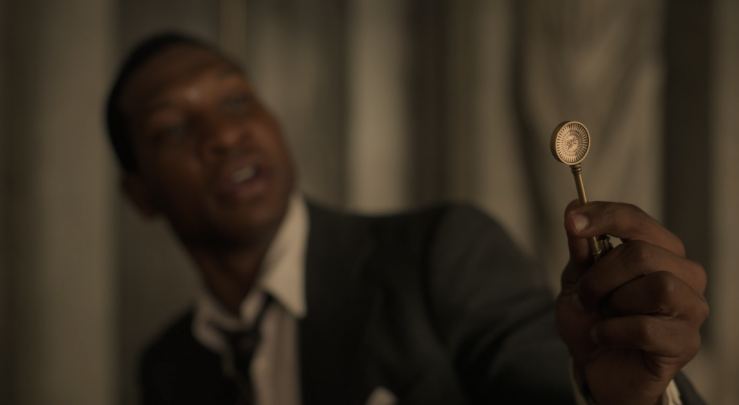 Christina meets Atticus at her family’s mausoleum. He wants to learn how to cast a spell, considering it a “birthright.” She can tell he’s worried for his safety, she also knows he found Titus’s pages from the Book of Names. This steal leaves the stolen pages of Horatio. Atticus shows off a key from the orrery, and this is what gets Christina to tell him more about casting spells. She draws him a “protection symbol” and tells him how to use it. He hands over the key hesitantly to his cousin.

We see that Diana is having trouble reconciling with the world Black people have to live in, and she’s also angry at Uncle Montrose for seeming to keep things from her. She hides from him, but when she sees the cover of Harriet Beecher Stowe’s Uncle Tom’s Cabin come alive with a hideous monster in the place of a Black person she flees through the window. Across town, Ruby’s treated like such a monster by a bourgeois white, looking to make sure the Till unrest doesn’t make it into the upper class white communities. This is followed by a beautiful moment between her and William, as he bathes her. Even if it’s actually Christina in William’s skin and Ruby changes into Hillary. Odd Gothic romance. Also difficult for Ruby, who transforms if only to get a taste of privilege, but likewise feels bad for doing so because she feels like it’s turning her back on the Black community.

Surprise, surprise for Atticus when he gets back to the house and sees Ji-Ah has come to the city. She’s already there sitting with Leti. Probably a bit awkward. Worse when Ji-Ah explains everything about her sexual transformation, then she tells Atticus she saw his death. This all obviously causes disruption in the lives of Atticus and Leti.
Things for Diana get very scary as racist pop culture comes alive. First, it’s the cover of the book with Topsy appearing like a demon. Next, it’s two girls dressed the same as Topsy, except more like the hideous cartoon characters so often used to demean Black people with stringy hair and over-exaggerated red lips. The girls terrify Diana and she can’t escape them. “I saw someone being reborn”

Atticus and Montrose talk about the father’s secret homosexual life. Dad says he never “acted on it” until his wife was gone. He tells Atticus about a pastor from his church as a boy; the pastor was caught with another man and later got hauled away by cops, tossed in an asylum and given a lobotomy. Sadly, Montrose had few choices when he was a boy. He didn’t want to die by the hands of hateful bigots, nor did he want to end up in a psychiatric ward. All he wanted was a family and love.

While Leti prays she’s interrupted by Christina. She’s asked her there for a favour. She’ll hand over negatives of Titus’s pages if Christina will help make Atticus invulnerable. This is not a deal Christina’s looking to make for Atticus. But she’ll do it for Leti. Does Christina just have a thing for Black women? Or is there more to her scheming? Regardless, Leti agrees to hand over the negatives, and she’s granted with invulnerability— she receives the Mark of Cain. At the cop station, Diana confronts Lancaster. He says he’ll remove his spell if Diana brings back the orrery. She instead spits on him: “Fuck you, pig.”

So we come to find out the Lovecraft Country book by George Freeman is actually from the future, by a son of Atticus, who bases the book on the adventures his war hero father went on from Ardham to everywhere else. There are differences. But most of it’s the same, especially the fact Christina, a man in the book— wink, wink!— sacrifices Atticus to achieve immortality. Can he survive? Montrose knows he’ll give his own life to save Atticus.

Another great use of anachronism. While Diana’s dealing with Lancaster we hear Naomi Wadler from a March for Our Lives rally in DC a couple years ago; found here. She faces down one of the scary caricatures chasing her in the dark, riding her bicycle straight at the girl in a game of chicken. She gets away, for now. At home, Montrose is helping his son try to figure out how to cast spells. He recites the spell and Atticus stands in the middle of their summoning circle. Nothing seems to happen. At the same time, Christina’s trying to find some sense of empathy in the wake of her flippant attitude towards Till’s death. She does this by having herself beaten brutally, shot, then tied with barbed wire by the neck to a heavy object and tossed in the water. She emerges seconds later bleeding and choking.

Lancaster and his cops attack Leti’s house, unable to get through the front door because of the protective spell still on it. They’re trying to get to that orrery, even if it means pumping the place full of bullets. Then there’s Diana, trying desperately to protect herself from the living caricatures attempting to get her. Montrose offers a helping hand but only sees his niece fighting invisible fiends, despite her bloody arm.
When Atticus gets back he’s at gunpoint and Leti rushes from the house, right as one of the officers fires. He’s saved by one of those wild beasts from the sundown town— its colour decidedly darker— erupting from the ground. Is this due to Christina’s spell? Did Leti help conjure the creature? Oh, yes. The thing causes total chaos, ripping into the racist policeman.

A particularly poignant part of this episode comes when Leti shits on herself for not taking more pictures when Till’s mother was brave enough to show the world what those white men did to her son. Ruby tells Leti that she has to take care of herself first. This is a great moment because it speaks to the trauma Black people go through constantly having to document/speak on/rehash the deaths of other Black people. Something we see today with so many unarmed Black people shot by cops and other Blacks being expected to always watch it, comment on it, and so on. Lovecraft Country manages to interrogate the past while simultaneously digging into the present.