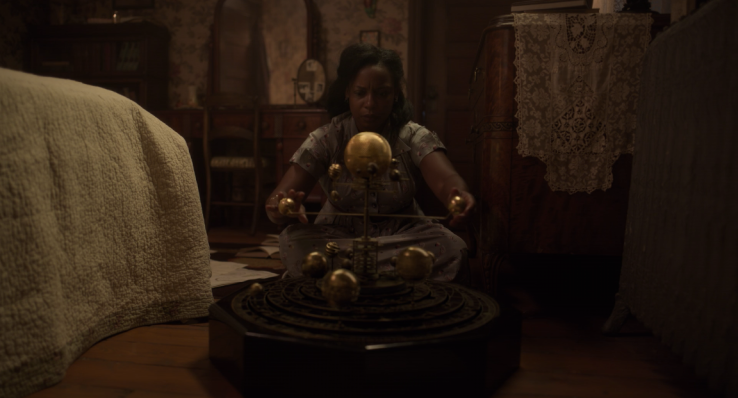 Hippolyta keeps playing with the orrery she found at the house Leti bought. Skip back to 3 days prior, she’s up in Ardham searching for clues as to what happened to her husband George. Diana tried telling her: “I don‘t think we‘re supposed to be here.” But her mother continued searching until she found a copy of the comic George had with him. She knew there was more to it. And so she keeps trying to figure out the orrery until finally she’s able to set it in motion.
But what now?

Poor Ruby’s head is spinning after finding out Christina’s been using William and Hillary as puppets. She’s attempting to make sense of it all. What exactly is Christina doing? She tells Ruby about the Order of the Ancient Dawn and how women are excluded. She got William to teach her magic when her father wouldn’t, and this only helped her to unlock her own power. Some weird stuff going on her, considering Christina had sex with Ruby as William. Now Ruby demands “the whole truth.” And she’s beginning to see her own family’s connected.
At home, Leti’s having nightmares. She wakes to find Atticus upstairs, never relenting in his search for answers. He translated a bunch of pages from what they found. After they talk a bit Leti reveals her dream about Hanna, watching the woman escape. They figure out they’ve had the same dream of Hanna. Is Hanna trying to warn them of something? Leti remembers Hanna’s holding a book. Could it be the Book of Names? We also get more info about Atticus’s history: his mother’s the only one of her family who survived the “riots in Tulsa.” And remember when Montrose was acting all strange, saying it smelled like Tulsa? Oh, my. I’m curious whether Titus and the Sons of Adam will be linked to the race massacre. Either way, right now Leti and Atticus might just wind up finding the Book of Names. Nice to see Montrose and his man spending time together. Sammy’s cooking breakfast, trying to do something nice for the two of them. At first Montrose acts like he’s enjoying himself. Then he picks everything apart and Sammy can tell he’s scared of getting “too close.” Things erupt and Sammy walks out. Montrose tries to stop him and they’re caught in an interesting situation when Leti and Atticus show up at that very same moment. Sammy leaves then Atticus calls his father “a faggot,” provoking Montrose into rage. Atticus asks if his mother knew, and his father replies “yes.” Such a painful look in Montrose’s eyes as he asks Leti why they came. Montrose is gay and Black, rejected by society, now he’s also facing the rejection of his son. Leti gets a bit of info before leaving, finding out Atticus’s mother had a cousin who also survived the Tulsa Massacre and later went to St. Louis.

Ruby’s left looking after Diana while Hippolyta takes a road trip. The widow’s very resentful of her nephew, barely able to conceal it when they talk. Her trip leaves Atticus and Leti without a car for their own trip, too. Not to mention Leti’s got unfinished business lingering between herself and Ruby, who’s also deeply resentful of her half-sister. She tries talking to Ruby, to be as truthful as possible. Things seem to lighten a little, though I worry about Christina’s influence over Ruby and what that relationship will mean. Meanwhile, Aunt Hippolyta’s on the road to Mayfield, Kansas.
In St. Louis, Atticus arrives to a friendly face, Ms. Osberta. The old lady knew Atticus’s cousin from Tulsa, Ethel. Ms. Osberta and Ethel were “two lonely widows” that became even closer friends after the death of their husbands. Atticus gets asking about the Book of Names, and Ms. Osberta remembers some kind of “family bible.”

Ms. Osberta shows Atticus old photos, in which he sees Ethel. He notices a birthmark on Ethel— the same kind of mark he has on his back. After that he gets a call from Leti, who’s just found Hiram’s orrery. She knows Hippolyta’s figured out the lies they’ve told, and the orrery could be leading Aunt Lyta into something sinister. Plus, Ruby’s spying on her sis, getting all the details that will surely be shared later with Christina. Mah, oh, man!
Speaking of Hippolyta, she’s arrived at an observatory, where she locates a place to put a key. She tries to start it up but nothing happens. There’s all kinds of machinery. She tries more and seems to get everything running. Numbers begin flickering and Hippolyta does more calculations. Soon, she finishes them. She inputs things into the machine, turning some of the machine’s rings. That’s when she’s interrupted by two cops from Cpt. Lancaster’s station. And they’re interrupted by Atticus, swooping in to fight off the cops. In the middle of it all a portal opens up flashing between all sorts of locations. Atticus tosses one of the cops through it as his aunt pumps a bullet into the other guy. Before they know it they’ve both been sucked through the portal themselves. When Hippolyta stops she’s on a strange planet, a massive thing looming above. She’s all alone. From the thing huge robot-like people come out. Hippolyta comes to naked in a blinding white room, on a table like she’s been examined by a doctor. There’s a jumpsuit left for her, and in her wrists are strange glowing implants. She leaves the room and comes upon a robotic woman. She asks what the woman is, and the woman replies: “I am.” But no more answers. Hippolyta sits trying not to go mad, trying to figure out what’s happening to her.
She uses a piece of metal from the table to break into the wall and get at the electrical components. But the robotic woman returns, tossing Hippolyta back with psychic force. The woman asks who and where Hippolyta wants to be, so Lyta answers she wants to be “dancing onstage in Paris with Josephine Baker.” Immediately Hippolyta finds herself exactly there, performing with Baker (Carra Patterson) and a ton of chorus girls. She messes up the dance and pisses off all the French women. Baker’s the only one nice enough to help her learn. This life suits Lyta just fine, and she really gets into it. She even rubs shoulders with Frida Kahlo (Camila Canó-Flaviá) after one performance. This whole experience shows Hippolyta how she’s never had real freedom in America. She tells Baker: “Sometimes I wanna kill white folks.” And resents whiteness for what it’s done to her, reducing her to someone who only accepts the freedoms she’s given, not the freedoms she deserves.

Hippolyta screams out her name and she’s transported back to an African village where she’s in the middle of a circle, practising her fighting skills. The warrior woman she faces beats her down, then preaches female liberation against the patriarchal hold of men. She urges Hippolyta to get up and grab her sword, to not give up. She continues to beat Lyta down, too. That is until Hippolyta gets tougher and tougher, facing the warrior and eventually putting the woman on her knees. She’s found her strength. Again, strength for these Black characters in Lovecraft Country has often relied on drawing off the strength of their ancestors, from Atticus and Hanna to Hippolyta’s kick ass transformation here. Once Lyta’s ready she and her tribe go running into a battle with a bunch of white men. This sequence is wonderfully set to “Fire” by Mother’s Finest.
Through this existential journey, Hippolyta’s discovering her power not just as a Black person, but her power as a Black woman. She’s learning that she doesn’t have to be someone else’s definition of strong, certainly not a white patriarchal society. She goes back further in time to be with George again, telling him about what went on while she went to another planet, another world. She also tells him he was part of making her “small” rather than letting her blossom as her own fully realised person. Hippolyta goes on with George and they travel to the stars. In the background, words of Sun Ra play: “You don’t exist in this society, if you did your people wouldn’t be seeking equal rights… I do not come to you as the reality, I come to you as the myth because that’s what Black people are myths.” Perfect words from Sun Ra in an episode full of Afrofuturism. Hippolyta wonders how to be all she’s learned in this other place but back there, in her regular existence on Earth.
At the observatory, Atticus is spit from the portal. He can’t find his aunt. He finds a copy of Lovecraft Country by George Freeman. He takes off running, but in the pooling blood of the dead cop is that comic by Diana. Uh oh.

Probably my favourite episode of the series yet.
This is what the series can be! More, please.