The prison is on lockdown after the escape of Zelmare and Swanee. The town’s being searched high and low by Deafy and his men. He later turns up in the police chief’s office unannounced. Dick ‘Deafy’ Wickware’s a man of faith, giving the chief a crash course on the twelve tribes of Israel, talking about “the Nephites and the Lamanites.” It’s actually religious racism, calling Black people Lamanites, cursed to have dark skin. That’s some seriously deep racist shit there. See, Deafy’s a Mormon priest and a member of the “Quorum of Seventy.” He’s also a U.S. Marshal. This is where Odis gets pulled into helping Deafy, now unable to work for the Faddas behind the scenes. Quite the odd couple.

Kansas City is a busy place. While Odis and Deafy are staked out watching the Smutney house, Loy’s man Doctor is running the slaughterhouse, Zelmare’s oblivious to the cops nearby, and Oraetta’s delivering her ipecac pie to the Smutneys. Deafy’s ranting on about Mexicans, hermaphrodites, and a “spaghetti eater” he once knew, so Odis chimes in, telling him that not everybody “darker than a Norseman” is a bad person. Dt. Weff may be under the mob’s thumb, that doesn’t mean he’s a racist— though, he’s still a cop. Anyway, this scene leads us to where the last episode left off with Deafy and his men kicking down the Smutney’s door, inadvertently saving them from ingesting a bunch of ipecac. Ole Dick questions Dibrell about her sister and he tries to get Ethelrida to talk. The girl won’t say anything. So then the cops get searching the house and mortuary. 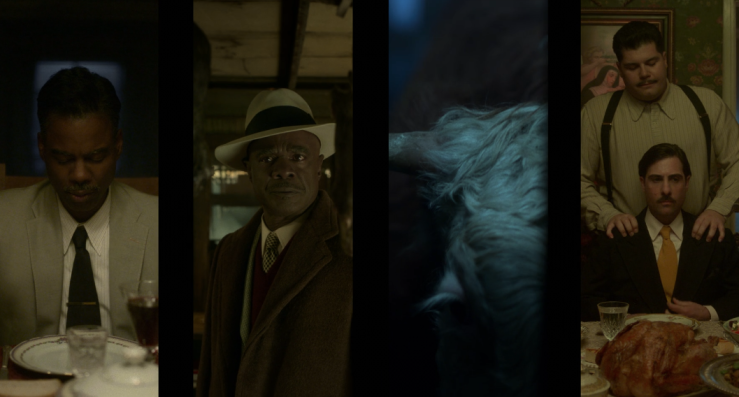 Odis goes downstairs to the mortuary with a couple men. They check the drawers, only finding corpses. They’re repulsed by a particularly nasty dead man and rush out of there, the two others puking on their way. This sends them off without checking one of the lower drawers, where Zelmare and Swanee are hiding. The women manage to sneak upstairs, where Ethelrida sees them, trying to communicate quietly, and hopes they don’t do something incredibly stupid. Dibrell talks Deafy down, and the cops leave. For now, the Smutneys are okay. An interesting difference: when the cosp leave Thurman’s fine and gets up, whereas Dibrell, as a Black woman, has to take a moment to breathe deeply, likely glad she survived an encounter with a federal marshal and local police. A sad, telling difference in an interracial marriage during the ’50s.

At a diner, Doctor sits down for breakfast and a meeting with Ebal Violante. He talks about his time during the war and the idea of the Double V Victory sold to Black Americans. He was sent to Nuremberg, where he was meant to interview Herman Göring. He interviewed the man, wrote a major 400-page report, then his superior threw the report in the trash. Because Doctor was sent there simply to make Göring uncomfortable “having to answer to a Negro.” A microcosm of how Black people were used by the American government in WWII, or any of their wars, for that matter. This also illustrates why Doctor is insistent on people sticking to their word. And he refuses to let go control of the slaughterhouse, too.

Satchel bonds with Rabbi when the latter tells him about being “traded twice” during the wars between the gangs. Rabbi’s resigned himself to a life he never got to choose, not once. There may be a kindred spirit there for Satchel, beyond some conversation between friends. It could be that Rabbi might switch teams again eventually before this is all over. That is, if he can stay away from the ire of the unpredictable Gaetano. Even Josto has trouble with his own brother.
Dr. Harvard is interviewing none other than Oraetta for a position at his hospital. She easily gets in the door, hired on the spot. The doctor has more to worry about than new hires. He’s being watched by Josto, whose taunting brother’s pushing him to work on killing Harvard. Oraetta finds Josto in the parking lot, so she hops in and chats him up, believing he’s spying on her. Then she busts out some drugs for them to snort. After that she jerks him off right then and there while singing the “Battle Hymn of the Republic.”

When Loy’s on the street a young, poor Black man asks him for a few coins to get a cup of coffee. He teases the young man with a roll of cash. He acts like he’s teaching lessons when he’s a man taking his living by blood and bullets, acting higher and mightier than this poor guy who’s also potentially a junkie. Not as righteous as Loy might think it is, and it’s all mainly because he’s afraid his son wants to play jazz. Across the street, Zalmare and Swanee are making their own plans, counting the people in Cannon’s crew. Uh oh.

Gaetano’s planning to kill somebody at the top of Loy’s organisation. He doesn’t care what his brother says, and there’s really nothing anybody can do to stop him. He has men who’ll be loyal to him, whether out of plain loyalty or out of fear. Either or, it gets the job done. Gaetano sends his man Constant to do the deed, urging him to take Rabbi, to ensure the Irishman is really on the side of their family. Who’s Constant choosing to murder? Loy’s oldest son, Lemuel. He’s making Rabbi pull the trigger, as well. It doesn’t sit right with Rabbi. He refuses to pull the trigger, stopping Constant from doing so, too. They wrestle for a moment until Rabbi makes clear they’re at a stalemate. He won’t tell Josto about this, and Constant won’t turn this into something bigger. No guarantees the latter will happen.

At the Smutney house, Swanee’s telling stories about her father and digging into the apple pie. Dibrell isn’t pleased to see her sister is going off to do more robbing and shooting. Her husband’s giving them a ride in the hearse. That might be a bad situation if the ipecac pie kicks in before they get to their destination. Oh, good lord. That’s exactly what happens, beginning with terrible farts inside a coffin. The women get dropped off and Swanee’s feeling the effects of the pie, right as they’re headed in to steal from Loy’s operation. Swanee farts and pukes as soon as they’re inside. One guy gets shot when he tries to kill Zelmare, and the women have to get out of there before Swanee shits herself.
This sends Loy into defence mode. He doesn’t know what to do next, worried there could be more attacks coming. Doctor’s curious if Josto or Gaetano gave the order. He thinks there could be infighting between the two Faddas over control of the family. Cannon’s organisation have to know for sure before they go in guns blazing.

“More power, more safe;
you can’t have both.”

My favourite episode of the fourth season so far. Heating up now.