DISCLAIMER:
The following essay contains SPOILERS!
Turn back, lest ye be spoiled.

One of my favourite features during Nightstream was Bloody Hell, directed by Alister Grierson and penned by Robert Benjamin. This feels partly inspired by Tarantino, partly by ’80s horror, the sort of horror comedy that works because it has just as much thematic weight as it does laughs. And it’s certainly got the horror, too.

Rex (Ben O’Toole) is a former U.S. soldier who finds himself in the middle of a bank robbery when he decides to play hero. He gets a woman killed and a judge sends him to prison. When he’s released, he’s infamous, and it forces him to get out of America. He flies to Helsinki where life only gets worse. Rex comes face to face with unimaginable horrors. He also meets a young woman named Alia (Meg Fraser), whose family are a bunch of disturbed killers. Playing hero becomes only half of Rex’s battle.

Bloody Hell takes off like a rocket. O’Toole’s performance keeps things clipping along, and despite his Rex being a prick-ish dude he makes the character shockingly likeable. The best part of the film is Benjamin’s screenplay making good use of its duel scenario: Alia’s family despair echoes Rex’s personal history as a U.S. soldier in Afghanistan. The pair, vastly different though they are, share the unfortunate connection of each having PTSD. Alia comes from a murderous family who forced her to do awful things, and Rex is a veteran whose country did the same, making the film an allegory about specifically American horrors.

There’s a lot of critiquing America in the plot. Most evident right away is how Rex’s behaviour during the robbery is a microcosmic symptom of American exceptionalism. Just like America thinks it’s the authority on freedom around the globe, Rex sees himself the same way as a former soldier wherever he goes, even at the bank. Rex’s violent heroics lead to the death of an Asian woman. Here, the white man’s “heroic nature” causes a woman of colour to die because he wanted to play cops and robbers. We can take this as an allegory for the American military perceiving its war and bombings as helping other countries while it’s simultaneously killing predominantly non-white citizens.
The whole bank robbery mess reflects American attitudes towards violence. Rex’s delivery of slick lines and trying to come up with new ones shows how American society has glorified violence via pop culture, and how 2nd Amendment lovers have mythologised the ‘good guy with a gun’ theory. Rex’s violence is particularly hypermasculine, too. When he has the last robber at gunpoint, his second self, like a devil on his shoulder, says: “Shoot him in the dick.” This is where we see how toxic masculinity and American violence come together. Rex’s interference in the robbery is more about him showing off his gun skills— the gun a phallic symbol, merging masculinity with violence—than it is saving the other hostages.

During one scene, Rex says he wants to return to “the good ole U S of A, where we don‘t fucking eat people.” It’s a comedic moment, yet unintentionally ironic. Rex’s insistence on comparing Finland to America, based on the behaviour of one small group, contrasts the cannibalism going on in that Gothic house belonging to Alia’s family with a type of social/political cannibalism happening in America. Though Americans may not be eating each other’s physical bodies, America’s government is cannibalising citizens shoved to the margins: POC, trans people, women, people with disabilities, people who suffer from mental illnesses, and yes, soldiers, too. 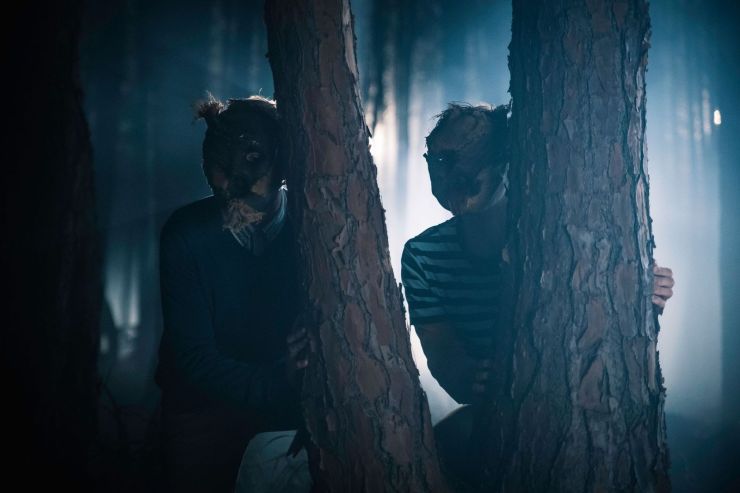 The past continually haunts Rex. We find out he served in the American military during OEFA, otherwise known as Operation Enduring Freedom in Afghanistan. This officially began in October following September 11th, when George W. Bush announced airstrikes were occurring in Afghanistan targeting Al Qaeda and the Taliban. Of course we know the death toll of civilians, and we know a fraction of the other horrors that occurred while American troops were on the ground. The Gothic house and its basement become a space in which Rex has to revisit wartime trauma. His loss of a leg—nearly two—conjures images of legless/limbless soldiers returning from Afghanistan having been blown apart by IEDs. In the basement of that Gothic house, Rex’s amputated leg embodies the forgotten veterans of George W. Bush’s war left in the figurative national basement.
Still, Rex has a dark side that’s never not evident. His attack on the little boy in the basement is a grim reminder he was a soldier in Afghanistan, that he may have done terrible things like so-called American hero Chris Kyle who shot a woman carrying an infant and supposedly wielding a grenade. It’s why part of Rex’s experience feels like punishment. Fitting that he’s in Helsinki and earlier sees the abbreviation HEL on his plane ticket; Hel is sort of like a Norse mythology parallel to Christian Hell. Rex is in his own personal Hell, further seen by his vision of Alia as the woman from the bank, like he’s given a chance for redemption even while being tortured for his transgressions.

Bloody Hell ultimately presents Alia’s situation with her family as an allegory of Rex’s time in Afghanistan. Rex sees himself as two selves which comes to represent the effects of his PTSD from deployment in Afghanistan. Alia later shows her PTSD at the end when she watches herself—like Rex sees two of himself—killing somebody in a violent daydream fantasy. At one point she plainly tells Rex she “never wanted to be part of” her family’s Gothic legacy, but got pulled into it anyway. He should understand Alia because he served in the imperialist U.S. army, fighting someone else’s war. Rex was sent to fight a war created by old white men, and Alia’s expected to carry on a hideous tradition started by her family. 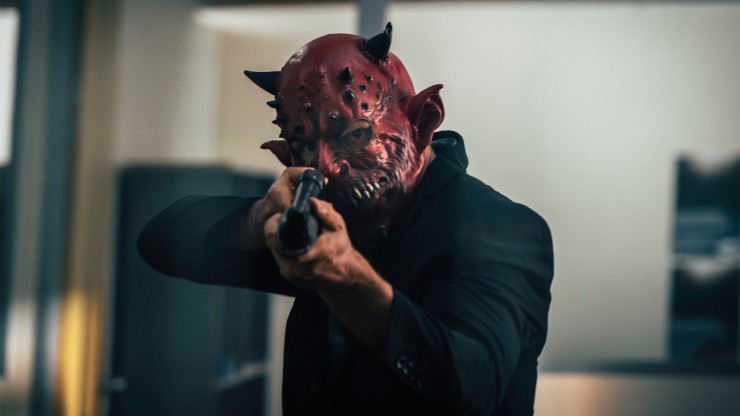 The paradox of Bloody Hell is that it’s so fun(ny) and enjoyable to the core while being a horrific, powerful allegory for the terrors of America’s presence in Afghanistan. Something this thematically heavy, and explicitly so, is often much more grim. Grierson keeps a tongue in his cinematic cheek the entire time, so the strong allegory comes across and never weighs down the screenplay’s equally comedic flair. O’Toole and Fraser show off enormous talent, making cartoon-like characters feel lived in and real.

Horror is a great genre vessel for sociopolitical messages. It’s been that type of genre since its beginnings, and anybody who says different simply doesn’t know their horror/Gothic history. Bloody Hell is a fantastic example of how to deliver a fun film and a conscious message in the same blow. Considering the horrific destruction of Bush’s War on Terror, it’s surprising more horrors haven’t used it as a backdrop for monsters, ghosts, and all of the genre’s other elements. Grierson’s film is a must-see that’ll crack some up, gross some out, and make many others think.