The crew have a young guy turning up at their camp in the middle of the night. He’s alone, seemingly. He doesn’t have anything with him, either. So what exactly is he doing out there with no food or supplies? His name is Percy (Ted Sutherland). He accepts a bit of food and tells them about Mike and Tony (Scott Adsit), with whom he spent time on the road. The two men eventually robbed Percy. Not so “nice guys” after all. Of course our group are sceptical of the guy. Percy says he’s looking to find Mike and Tony because they took something very valuable to him, something that cannot be replaced. It isn’t about revenge for him.

Felix sets the camp up with a little extra security, in case the guy is telling them lies. Silas suggests they maybe give Percy a few supplies and send him on his way. Though the newcomer isn’t rushing to leave. He sits around the fire telling Elton and the rest about his own wild adventures along the road. Everyone’s starting to feel a little more welcoming towards Percy. He tells a story about being on an overpass and nearly getting chomped by walkers, only to realise what was coming for him was a massive horde of bison; after that, he resolved to live life again rather than solely waiting for “the end.” 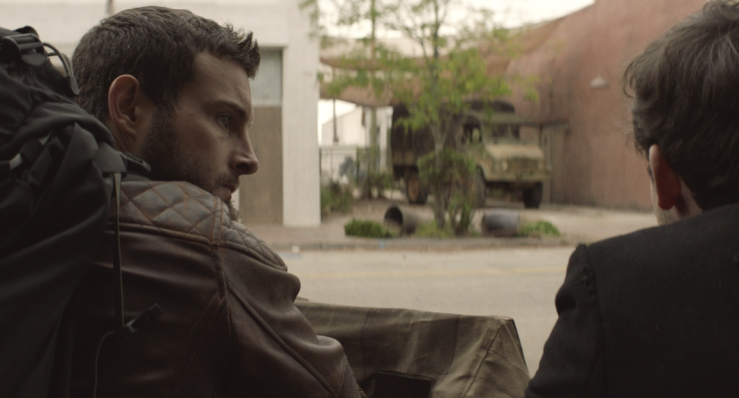 After a while, Hope begins to question Percy’s story when he tells a potentially obvious lie. She figures out Percy had his vehicle stolen. He didn’t want to tell them about his truck, which contains “barrels of refined fuel.” Iris offers to help Percy get his truck back in exchange for a ride to where they’re going. This doesn’t sit well with Felix, knowing this Mike and Tony won’t give over the vehicle without violence. Is this real? Or could Percy be pulling a long con on them? Either way, Iris is only thinking of reaching her father as soon as humanly possible. And Felix figures they’ve got the numbers to take on the car thieves.
I do not feel good about this—anybody else?

Very awkward and sad that Hope’s discovered she accidentally killed Elton’s mother. She asks him about her, and he gladly, sweetly speaks about his mom, as well as her accomplishments. Elton keeps his mother’s manuscript, hoping to finish it off and then pass it on to somebody else later. Perhaps Hope offers her services to help him finish the manuscript as penance, a way of making up for what she did without having to tell him. Quite the painful coincidence too that it was Leo who convinced Elton to keep working on it in the first place.
The group carry on walking. Iris tells Percy all about her father and why they originally went off on their journey. She could be telling him too much; I still don’t quite trust him yet. Silas doesn’t trust Percy, or like him. I’d stick with his judgement because there’s something off to me about this new face. At least Felix is cautious. They’re all sneaking around when a truck pulls into the street. Percy identifies it as his vehicle, so he and Felix move to take it. They discover Tony with a bullet through his head in the driver’s seat. They also see there’s now a plate bolted over the ignition wires, meaning Percy can’t hotwire the thing. Felix is starting to feel this is a lost cause, but Percy won’t stop, and Iris is intent on helping him—again, Felix refuses to put either of the girls in danger, so he takes charge.

Felix, Elton, and Hope go to where Percy stayed with his friends, looking for Mike. Felix goes inside with Percy while the other two wait outside, and back the other way Iris is hellbent on doing her own part. She eventually runs into Percy as he’s checking one side and Felix checks the other. Great moment where Felix smashes a mirror thinking it’s a zombie, getting attacked from behind. He makes it out safely, thank the gods! Simultaneously, Percy and Iris find a room where we can assume Mike’s staying—someone’s in the bath. Percy sneaks the keys out of the guy’s pants and they leave. He wants to grab a few more of his things, so he sends Iris off with the keys, telling her to get the truck ready. Unfortunately we hear a gunshot as Felix pleads, and Iris can’t leave him without trying to help. Just as I expected, it was all a ruse. Percy and Tony, who’s still alive, have stolen the group’s things. Mike’s actually a zombie in the bathtub, part of the whole distraction. Iris tries to run after Percy with no luck, and Hope can’t catch them. She falls into a dumpster, calling for her sister. She then hears the groans of a zombie moving through the trash, and another pops out behind her. The others rush to help and more zombies turn up from the alley. Felix gets the dumpster open, saving Iris, as Percy and Tony come back with the truck to get everybody out of there. Odd turn of events. I guess Percy’s got a conscience.

Down the road, Felix and the group turn their weapons on Tony and his nephew. They’re not a vindictive bunch, so they drop the weapons and relax. Gives Tony time to do a few parlour tricks and they all pass some time together; he was an illusionist with a gig at the “Paradise Lounge in Las Vegas.” He’s found a way to use his talents in the post-zombie apocalypse wasteland, offering services at friendly colonies and even using them to grift shit off people. Iris feels especially betrayed because she thought she had good instincts about people. Percy feels she does, given that she bothered to go back and help him, regardless of outcome. That ironically gave him the conscience to turn around, as well.

Tony and Felix talk about the Civic Republic’s insignia on the latter’s jacket. It’s the same logo as the one on Tony’s truck. He knows that Felix isn’t quite on the same side as the Republic. He does hope that the symbol might get them through necessary spaces should it come to that eventually. Before the group heads anywhere together, Tony and Percy have prepared some entertainment with a shadow puppet show that tells the story of how they all got there, and a story of continuing hope. 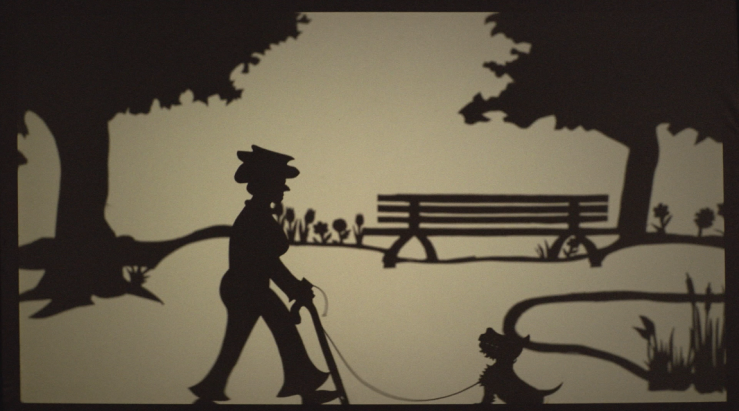 Really loved this episode. Enjoyed the swerve from Percy and Tony being jerks to them becoming at least a temporary part of the crew. It’s more exciting than just the group being screwed over, which is exactly where I thought it was all headed. We’ll see where this relationship goes. Some awesome zombies here, too.