AMC’s The Walking Dead: World Beyond
1×05: “Madman Across the Water”
Directed by Dan Liu
Written by Rohit Kumar

“Nature contains us all” and it’s the strongest force in existence. That’s basically the premise of any zombie film, in a sense—zombies can be symbolic of that creeping, inevitable death. That’s juxtaposed by the “biological imperative” of human survival in the post-zombie apocalypse wasteland, where walkers and humans wrestle for position as top of the food chain. Right now, Felix, Huck, and the kids are nearing the Mississippi. They’ve got to get a boat to reach the other side, given that all the bridges were knocked out at one time or another. Except Felix, Huck, and Elton are plotting to turn the group around. The boy’s not quite certain he wants to do that just yet, in spite of his clear doubts. First they’ve got to somehow get Iris and Hope to turn back, and the sisters seem pretty solved to go on. Huck suggests to Felix that one of them takes the boys while the other continues down the road with the sisters. Hmm.

Iris and Hope are set on a boat, however, there are really none left. They come upon the trashed frame of a boat. They then decide on going to a nearby warehouse to look for parts, hoping they can fix the boat instead of building a whole new one. The crew make their way to the warehouse and start searching for anything usable. Elton’s reminded of his parents, his father telling him about meteors and dinosaurs going extinct; he also recalls his mother being pregnant and his unborn sister’s kicks. He was planning on giving a bracelet to his sister when she finally arrived. A bittersweet memory with looming threat in the background, signalled by the siren of a police car.

The crew have things to use on the boat. All except a motor. Iris thinks they could make a “steam boiler” from an AC unit to try powering the boat. The kids keep their optimistic attitude, never willing to give up, and it’s obviously frustrating to Felix, who’s keeping silent on his attempts to get the kids to go back home. Silas, Iris, Hope, and Elton work hard alongside the two adults to create a raft-like boat out of barrels and ratchet straps and wood and other junk. Hope overhears Felix and Huck talking about their plan, so she confronts Elton. The truth comes out. Hope won’t be convinced. She and Huck talk it out together, the latter urging she shouldn’t lose her trust in Felix because he’s a good man who only wants to protect others. But it’s about more than that for the young girl. She resents Felix for her father going to the Civic Republic. At the same time, Felix feels horrible because he was supposed to go with the sisters’s father Leo. He was asked by Leo to look after the girls, so his partner Will was the one to go instead.

Poor Elton. He only wants his friends to stay alive. Because he’s been through true horror. He felt the terror of hearing zombies outside their home, trying to get in. He remembers hiding away in a crate while his father fought them off. And now he’s worried about the same tragedy occurring in this new wasteland life. Perfect time for, in the current day, a power line pole to get toppled by a lightning strike—it falls into a building full of zombies, letting the undead horde outside. Not good when Huck and Hope are making noise, attempting to get their motor working. Can they get the boat going on the water before the empties reach them? They nearly have the motor running when it all but catches fire.

Luckily for the group Felix thinks quick on his feet. He runs fishing line around a couple trees along the path to at least slow the horde down. They’ve got to get someone underneath their makeshift motor to fix things, and the only one small enough is Elton. He’s got to overcome the claustrophobia reminding him of that day in the crate, or they’re not going anywhere. So, the little man sucks up the fear, and goes underneath while reciting the names of the planets to calm his mind. He’s able to get the job done, only he’s stuck on his way out, which makes him start freaking out. Moments later he’s pulled free by Hope and Iris. Plus, no matter how many walkers Felix and Hope chop down, there’s too many. They all push their hardest to get the boat off the shore, but no luck. Suddenly Felix comes running back to them and helps push until their boat’s in the water. Huck thinks she and Felix should split things up, so she heads off to scout ahead for them. A “divide and conquer” strategy somehow; not sure, at this point, anything’s going to change the minds of these determined, tough kids. Even Elton’s proving he can push past the fear he continues to feel.
All these kids were only small when the zombie apocalypse happened, they knew nothing but the lives of being children in a normal world. They weren’t prepared for being teenagers, let alone adults, and let alone in a world drastically, horrifically altered. They’ve all got their own tortured pasts—Elton’s merely the next in line to conquer what scares him most. He remembers the bittersweetness of getting out of that crate years before, that, despite everything else, there was hope in that moment. “And sometimes a moment is all you need.” Most importantly, Elton recognises that being scared doesn’t mean weakness, but that being scared and facing the gale is bravery and it takes strength, like his father. He holds onto hope still that his mother, and his sister, are out there someplace surviving. A SHOCKING MOMENT: Hope realises it’s Elton’s mother she accidentally shot that night her mother died. Fuck me.

Also, who’s wandered into their camp? 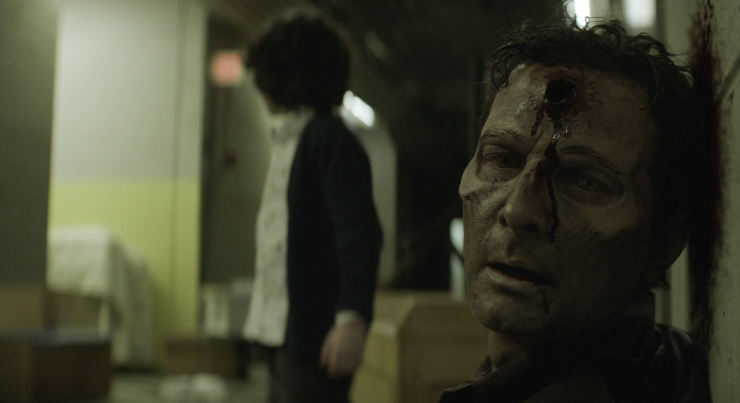 Lots of heavy sadness in The Walking Dead: World Beyond, simply due to the premise involving these kids. I think that’s also what makes the series special, and it touches on bits of the sublime in horror; something at once horrifying and beautiful. There’s something more compelling, and obviously more tragic, about watching these young people grapple with the loss of that old world they barely knew. I personally love these characters, including Felix and Huck. It’ll be interesting to watch them all be fleshed out further as these two seasons play out.