AMC’s The Walking Dead: World Beyond
1×08: “The Sky is a Graveyard”
Directed by Loren Yaconelli
Written by Elizabeth Padden

The gang have Silas tied up outside. He doesn’t remember what happened. Felix believes what he says, but that doesn’t change what occurred. They can’t find evidence of someone else breaking in to take revenge on Tony and Percy, known grifters. Plus, what about Percy? No idea where he’s gone, if he’s alive or dead. They found a trail of blood leading to the river, meaning Percy either escaped or died trying, so they think. I never quite trusted Percy anyway. For now, Huck’s breaking out what she sees as evidence, like those drawings in Silas’s pack that he kept from Iris. This doesn’t make it look good for Silas, of course.

We get a flashback of Silas on the fateful day that changed his life. He came to with blood on his hands. He saw his father lying beaten and bruised against the wall. What really happened was not some random violent outburst, it was a young boy defending himself against an alcoholic father beating the shit out of him. One of dad’s nasty wounds was an accident. Didn’t matter when cops came knocking. Is Silas, once again, being painted as someone he’s not? Probably. Either way, things are quite uncomfortable, though Elton and Iris both make good points in favour of the big guy. Felix and Huck are attempting to make a decision on what to do: take Silas along, or leave him. That doesn’t sit right with Elton, and he believes his friend would never hurt another person “without just cause.” I am a HUGE Elton fan. Some may find him cheesy, I find him endearing, and he’s probably the most positive-minded character on the show, unwilling to let the ugliness of that post-zombie apocalypse existence drag him down for too long.

Felix talks to Silas, who simply can’t remember anything due to his occasional blackouts. He tries to level with the kid about trying to not put everybody in danger. Silas is worried that he can’t remember, and that he could be someone just like his father. He can’t help but think back to that violent day with his dad. A neighbour tried to offer him help and he refused, unsure of what he should do, and then Silas saw that his dad had gotten up from where he’d beaten the man down earlier. Not good. This left Silas to go searching around the house, recalling memories of his mother tending to bruises his father gave her.

Elton went looking over the trail of blood supposedly left by Percy. He didn’t find anything. He’s dead set on helping Silas, no matter if the big guy is guilty. He won’t abandon a friend, whereas Hope’s ready to cut ties and let Silas go his own way out there. This is all made so much more agonising by how the episode’s cut, and here we see Silas find his dad zombified upstairs, traumatised a second time because he realises he’s killed his father. He couldn’t bring himself to kill dad again, so he got to his room and locked the door. There were cages on the windows—unsurprising for an abuser’s house—and it left Silas in a terrifying situation.
Perfect time to throw on “Battleground” by Lucian Blaque to drown out dad’s zombie noises. Listening to metal brought back fonder memories of the relationship he once shared with his father. There’s a lot of character and backstory here because it feels like dad was probably a guy who wanted to be a rockstar and wound up being a normal working class dude, perpetually disappointed in his own perceived failures. And it all ultimately resulted in poor Silas left alone with only music by his side. Mom got home and this is the only thing that pushed Silas out of his room to deal with undead dad. This also made mom frightened of her son.

Cut back to the present. Silas is tied up outside and a zombie stumbles past on the other side of the fence. It quickly notices him and starts trying to push through the fence, which is certainly not a well-maintained piece of equipment in a post-zombie apocalypse playground. It crashes through and begins a long crawl towards the kid. Silas struggles awhile, trying to get free so he can let the zombie take him. He looks to the stars and then comes to find Hope’s killed the walker. She tells him: “Enough people have died.” She also says she believes he did kill Tony. Bittersweet. 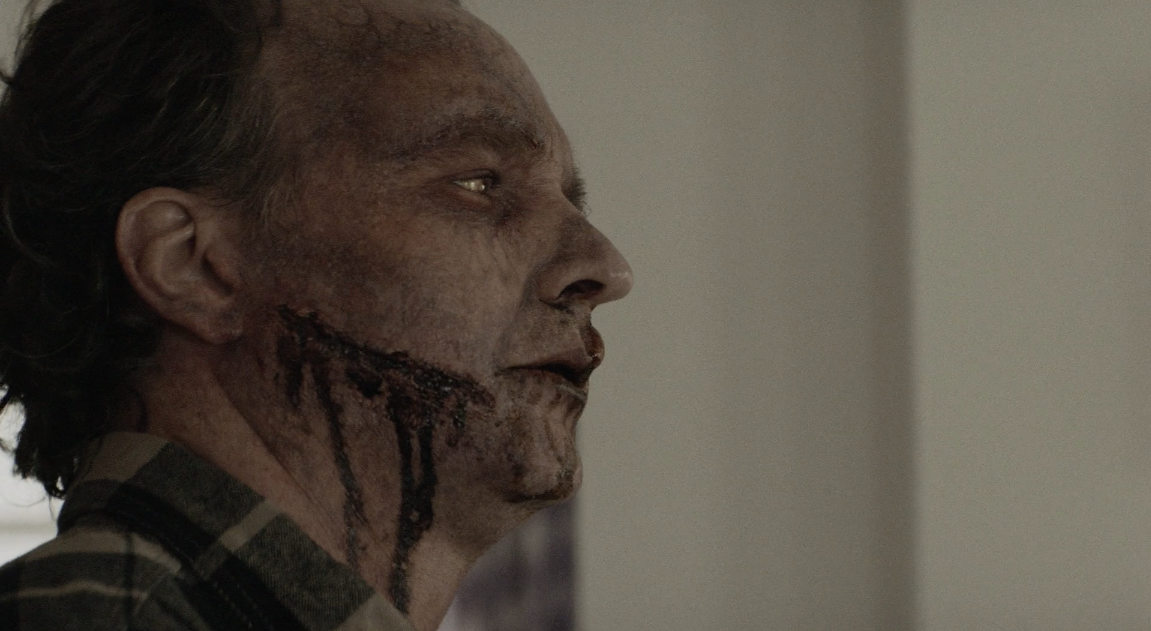 Iris asks Silas about the drawings, and he says they were “too beautiful to throw away.” She doesn’t want to leave him behind. She asks him to tell the truth. He’s gotten out of his ties, and he wants to talk to her honestly. He says he doesn’t remember legitimately, he blacked out. He thanks her for believing in him. But he believes he killed Percy and Tony, like he killed his father—except we know he killed his dad by accident, and, in reality, for good reason. Silas is willingly walking away from them all. This shocks Iris, as well as the others. Later, Elton decides he’s going, too. He doesn’t want his friend to be out there alone. That upsets Hope, yet this won’t change Elton’s mind. At this moment she decides to tell him about what happened with his mother. She gives Elton the necklace and explains how she accidentally killed his mom. This sends him off on the road to find Silas with a heavy heart. Speaking of the big guy, he’s leaving the past behind symbolically by laying down those headphones.

We see Elizabeth Kublek again. She and the Civic Republic are always scheming. It’s clear now that Huck is reporting back to Kublek every so often when she’s able. Oh, man. That’s not something I personally expected, even though it makes some sense due to Huck’s personal military background as a Marine. It also makes sense with what she talked about earlier to Hope re: “the greater good.” Shit.
Oh, and Huck? She’s Elizabeth’s daughter.

Nice ending to this episode.
This series is good, in my opinion. I like the characters. I also like the different backstories and how they’re playing out in the lives of the characters at their current juncture. Should be a wild ride to see how Huck’s betrayal of the group will make things difficult, both for the group and for herself.