Anthology horror films are hit or miss. In recent years we’ve seen great anthology horror, from V/H/S to its upcoming entry V/H/S/94, to the fantastic horror and sci-fi mashup Southbound, to the now Halloween staple Trick ‘r Treat. Yet there are plenty of anthology horror films out there which miss the mark hugely, only providing one or two solid segments amongst a bunch of lacklustre material. Bad Candy falls somewhere in the middle with a strong first third that soon crumbles, but while the good times last in this anthology of horrific tales they’re certainly good. More than that, the film makes a few fun, if not haunting points about Halloween in this day and age, like how bad men and adults have turned the holiday into their own night, full of sex and real life terror.

Bad Candy is framed around two radio DJs (Slipknot’s Corey Taylor and Zach Galligan from Gremlins) regaling their listeners with Halloween-themed stories that go from odd to disturbing. There’s a little girl dressed as a witch, having her Halloween ruined by a nasty stepfather. Her love of the eerie holiday conjures the drawings she does to life, one of which is a demonic clown heading out into the night to make sure everyone’s respecting Halloween. We also see a creepy necrophiliac, a man fulfilling the urban legend prophecy of tainted candy, and a bunch of other wild, weird folks who end up having a long, dark night. 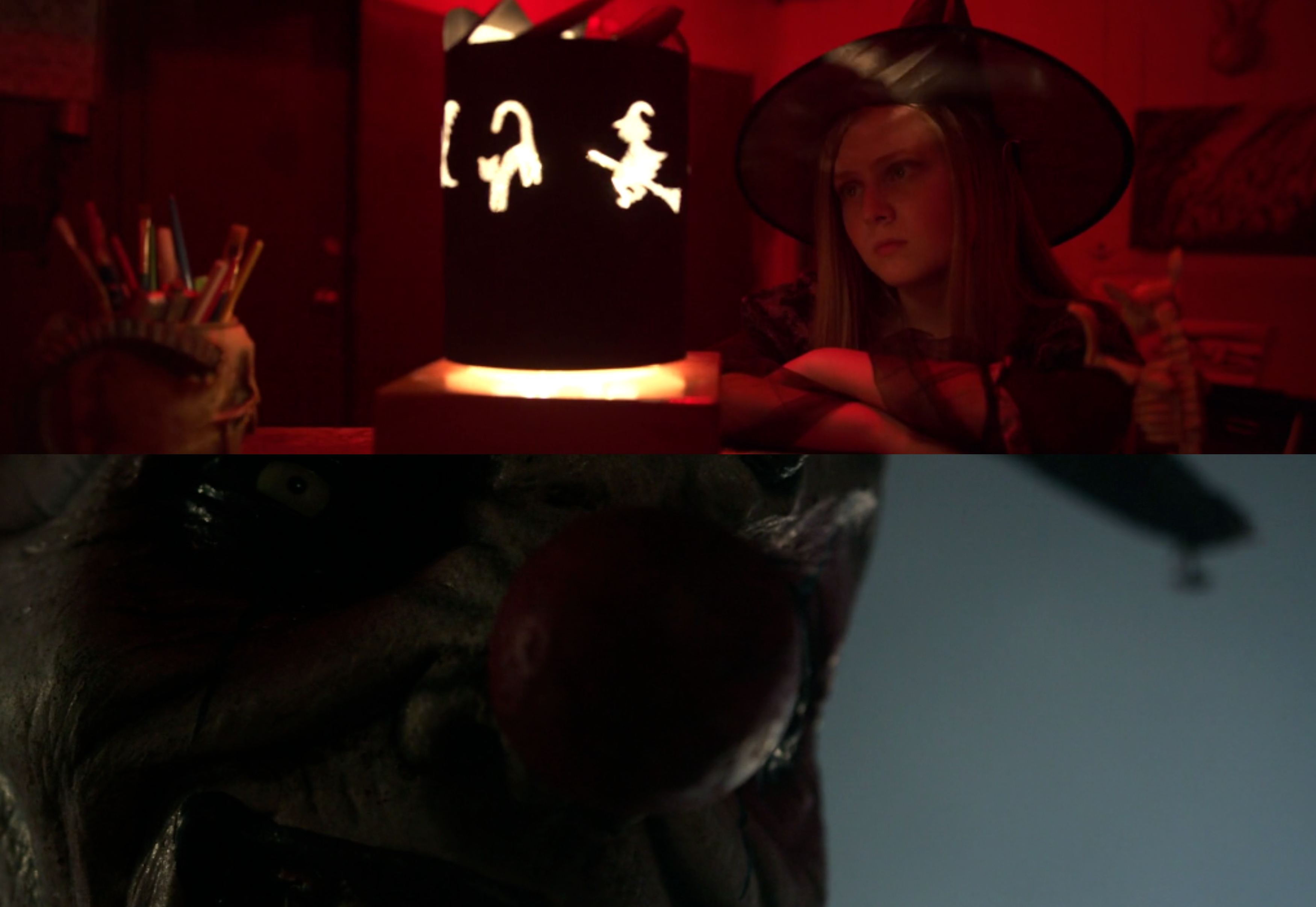 I always appreciate when Halloween horror, anthologies or otherwise, explores urban legends. Bad Candy appropriately uses the urban legend of tainted treats, even if only briefly, and it’s a fun, disturbing inclusion. There’s an old creep we witness actually going through the process of inserting razor blades into various candies, like full cupcakes or candy bars. What I find so interesting is the urban legend has a real life inspiration in the story of Ronald Clark O’Bryan, known as The Candy Man and The Man Who Killed Halloween—a horrific real life crime that gave birth to an enduring urban legend.
The bad candy of decades past was an urban legend, but the urban legend then gave sick people new ideas. The more troubling aspect of the supposed bad candy on Halloween is that the media and police have used the urban legend to serve an agenda now, it’s not actually about protecting children anymore. For instance, we have to listen to news networks spread propaganda about tainted Halloween candy, nowadays making THC/CBD edibles the scapegoat so it demonises those of us who use cannabis, and it has nothing to do with keeping kids safe anymore; another ideological tool for the cops and conservatives to use against people.

The tainted candy man wraps into the overall narrative, as the sad little witch girl accidentally conjures the demon clown figure from her sketchbook, and the terrifying clown heads out while people are trick or treating to discipline and punish those who’d shame the name of Halloween. And, hilariously, the demon clown punishes a greedy, entitled little vampire whose want for candy walks him into the arms of danger. Then the clown takes care of the razor blade candy creeper, as well as others. In a sense, the film involves a little girl’s imagination coming to life and protecting the childhood of Halloween, with the clown mainly attacking adults who’ve turned October’s holiday into their own perverse playground.

Something smart about Bad Candy is how it portrays the appropriation of Halloween by adults. Grownups have essentially taken a lot of the horror and terror out of the scariest night of the year, making it more about partying, drinking, and men lusting after women dressed in sexy costumes. Most of the adults we see in the film are either not dressed up, mostly the men, or dressed up as something non-scary, like most of the women. One lady’s dressed perfectly as a sexy nurse and she works in a morgue. The non-horror costumes, focused on sexiness, depict how adults keep shifting further away from the youthful spirit of Halloween. Worse, men use aspects of Halloween to turn the night into another hunting ground.

Bad Candy portrays a variety of bad men on Halloween, when others put their masks on but many use the cover of such a night to take their masks off. One of the bad dudes is a greasy drug dealer who yells “Later, skanks” to a couple women while trying to get laid by handing out free pills at a Halloween party. He’s rejected by most of the women he encounters. This dealer’s segment further parallels the childhood Halloween v. adult Halloween with him not handing out candy but pills instead.
The epitome of bad Halloween dudes comes in a segment about a young woman winding up fighting off a would-be rapist in a red Make America Great Again hat. The MAGA hat-wearing chud yells at her about being “a stuck up bitch … since the sixth grade,” illustrating how men hold grudges far worse than women, particularly when it involves sexual rejection and their wounded male ego. This young woman nearly becomes a victim of the sex-focused adult Halloween, a holiday now centred on male appetites rather than eating candy. 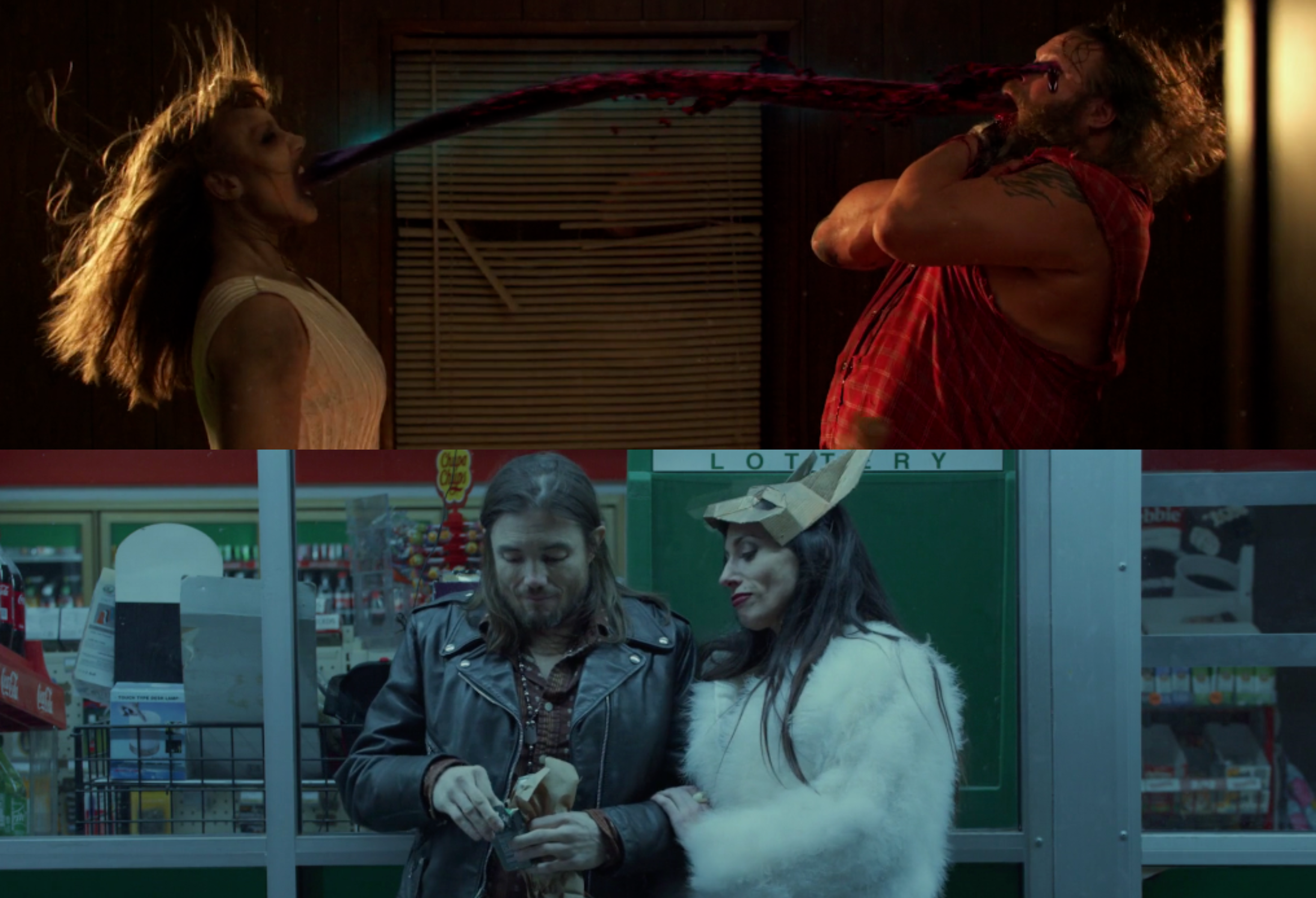 “If I have to fuck one more clown,
I’m gonna lose it.”

Even if I’ve rated Bad Candy two and a half stars out of five, I still enjoyed the first half hour, a lot. In spite of all the missteps, the film has a few interesting things to say about shitty men and urban legends. There are also several great kills and effects, such as the decapitated head sitting on a pile of Halloween candy, or the nail gun moment. One kill in a filthy bathroom is most certainly an homage to Scream 2‘s movie theatre bathroom scene, more gruesome than Wes Craven’s scene though nowhere near as close to as clever. If you go into this anthology looking for nothing more than a couple creeps and a few gnarly kills, you’ll leave satisfied.

The good pieces of Bad Candy combined with the little witch girl’s drawings coming to life feel like a couple Are You Afraid of the Dark? episodes stitched together. Regardless of the anthology not hitting all the marks it has enough to say in its best moments to make the film worthy of a Halloween season watch during one of your movie nights. Let’s just hope the terrifying essence of Halloween stays with us, that we don’t lose it to the nasty men or the fear-mongering conservatives. Because the 31st of October is meant to be horrifying—just figuratively, not literally.