Al’s going over what’s left in the SWAT truck; it’s non-operational at the moment, though only due to an empty gas tank. She’s out amongst the wasteland right now searching for a radio signal and dealing with radiated, decimated zombies, one of which has THE END written across its back. Some time later Morgan’s in the back of the truck, trying to find Al’s trail anywhere possible. But she’s nowhere to be found at the moment. So Morgan leaves a tape recording behind. He knows Al’s not missing, she’s out there somewhere looking for more stories. He knows that Al’s only running, like he was once.
And out there is also one of those familiar helicopters.

Al rushes to hide underneath the SWAT truck as soldiers from the helicopter hit the ground searching. She sneaks inside the truck and gets ambushed, but it’s none other than Morgan. He can’t leave just yet because Grace is out there, too; they’ve both been looking for Al. He wants to know more about the helicopters and why Al summoned one to get them out of the blast zone a while back, as well as why soldiers from a helicopter are now chasing her. Nevertheless, they have to get out of there right now.

Al’s very tight lipped about things while Morgan wants answers. She doesn’t want to put him in any more danger than he is already. He doesn’t know why she separated from the group. She tells him: “I belong on the road.” She claims it’s all about the stories and recording them; Morgan believes that’s merely a way for her to isolate herself from others. We get clips of a video every so often in this episode, right from the start, featuring Al on camera, and we can probably guess it’s Isabelle on the other end, the woman from the Civic Republic Military whom Al met and fell for ages ago.
Soon, people are firing guns at Al and Morgan, so they have to take cover. He wants more answers, so Al tells him a bit about what she knows of the CRM and their mission. Al also tells him about Isabelle and that she’s the reason the soldiers are there. Morgan uses his radio to call Grace, telling her to meet at the rendezvous point, then he and Al have to make a break for it as Grace arrives with the car. Al continually insists on being alone, yet Morgan won’t have it and urges her into the vehicle.
Then they make it out of harm’s way; for now, anyway.

The car’s gas tank is nailed, so the trio have to pull off the road.
Now the group plans to draw out the soldiers and attack. It helps that Al knows enough about the military and how they operate to accomplish that. While she goes one way, Morgan and Grace go to the CRM helicopter near the truck finding fuel but no ammunition. Al sent them purposefully, so she could go alone. She calls “Reclamation One” over the radio and receives a response from the CRM. She puts herself in the line of fire directly, asking for an interview in exchange for all she knows about them. She’s also got an old Civil War-era cannon to use on the soldiers when they turn up.

We see, back at the truck, that Morgan’s the one who took Al’s camera, hoping it’d keep her from running off again. That didn’t work so well. Grace tries looking for clues on the tapes as to where Al might be meeting the CRM soldiers. Out in the woods, Al’s readying the cannon to kill. But she soon gets a call from the soldiers: they’re not coming. Because now the soldiers have Grace and Morgan at the end of their rifles, threatening to kill them if Al doesn’t turn over everything to them. The soldiers are about to execute Morgan when Al tells them she knows where to locate Isabelle, offering herself up in exchange for Morgan and Grace. The soldiers are going to kill the pair anyway, so Morgan fights back and gets the jump on them. One of the soldiers fights more while Grace hops in the SWAT truck. Grace and Morgan are able to get away, leaving the soldiers alive. 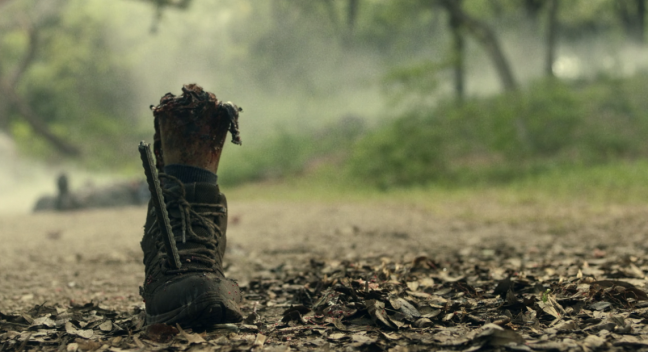 A little way down the road, Grace and Morgan are followed by the CRM helicopter. Soon the soldiers are ahead of the truck, almost at the location where Al’s waiting. Grace and Morgan get to Al, just as the soldiers arrive, too. Will the plan Al’s concocted come together after all? A zombie puts a little wrench into the plan. Al uses the SWAT truck’s empty guns to threaten the soldiers, but those CRM folk aren’t easily intimidated, firing at the truck to do their own intimidating. She gets out to greet the soldiers, stalling as long as possible while Morgan rigs the cannon again. When Grace moves the truck it gives Morgan his chance and the cannon blows the soldiers to gory bits on the road.

Morgan asks Al something in exchange for saving her life: an interview. He puts her on the other end of the camera. He asks about Isabelle and why Al isn’t going after her. We find out that Isabelle wanted to be with Al, so much so she put everything on line, but Al wasn’t able to do the same for her. Basically, Al can’t give up her life on the road, seeking interviews and stories out in the wasteland. She’s compelled to do it. And that’s all she’ll say. Now, she’s headed back out on the road, all alone. She gives Grace and Morgan a hug before leaving again.

Yet even when Al goes back to the mess of the soldiers’ bodies she can’t shake Morgan, who comes to see her one last time. They both hear someone calling over the radio left by the soldiers. They get back to the helicopter, where they hear another transmission, so Al calls back for “new target coordinates” and hears Isabelle’s new location. She knows the CRM will find Isabelle. Morgan hopes that Al will go find Isabelle instead of chasing more stories. For now, they part ways once more.
So Al goes to that cabin where Isabelle’s living. She finds the tape of her in a VCR before she’s reunited with Isabelle. It’s a happy thought bittersweet moment. Al explains the CRM knows Isabelle’s location, and that she wants them to be together, even if it means a life on the run. She smashes her camera, then the two embrace.

“You are the story“ 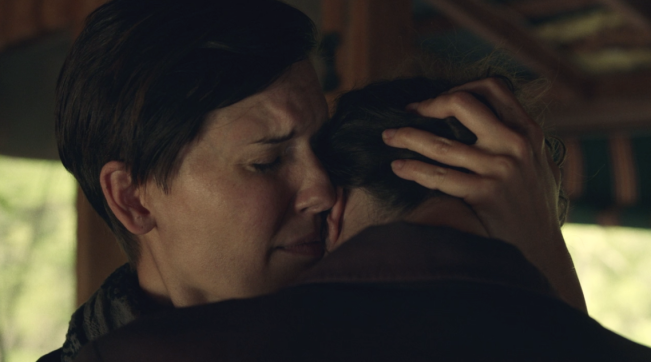