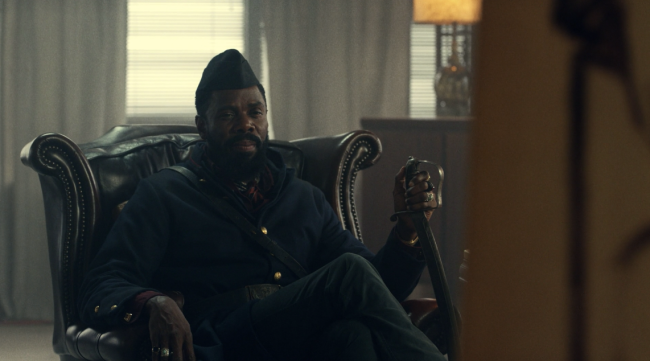 Life in Victor’s community complex is much different than the rest of the world. He sits to have his portrait painted by someone, quoting Oscar Wilde. His narcissism grows bigger every single day. He gets a visit from Howard, who brings news of an intake calling from downstairs. He questions how this new person found the place, someone named Arnold; he rejects the man because he recently found someone with the same “skillset.” More intake calls come in and Strand hands down judgement from up on high, refusing entry based on how many people with certain skills are already in the community.
The whole thing’s a macabre routine for Strand while Howard wonders if their leader is being a bit too judgemental without meeting any of these people. Nobody can convince Strand he’s wrong, and that’ll definitely NOT go well for him the more time wears on. Soon there’s another intake call: it’s from Morgan, who’s brought little Mo. The baby’s been sick and Morgan needs help, no matter from where it comes. He doesn’t want to stay in the community, he only wants to bring the child to see June. But Victor says no.

When Victor’s portrait is finished it seems to haunt him, perhaps because it reminds him of everything he’s done to get there. He isn’t happy with it, so he tosses it over the side of the building into the zombie horde. “She doesn‘t see me, no one does,” says Strand about the artist and the painting. Suddenly he’s obsessed with Morgan again and wants him tracked down. Is he going to let his enemy and the child inside? Hmm. And why, exactly?
Not long until Morgan finds himself within the complex. He asks about where all their friends are; some are part of the community, others, like Alicia, are unaccounted for out in the wasteland. June has a look at Mo to check the baby out, and she has a brief reunion with Morgan, as well. Morgan wonders whether June and the others are happy and, most of all, safe. She’s resigned herself to living there. She also tells Morgan that Mo has a double ear infection; it’ll take a couple days to clear up. For a little while, Morgan has to stick around for “a holiday.” 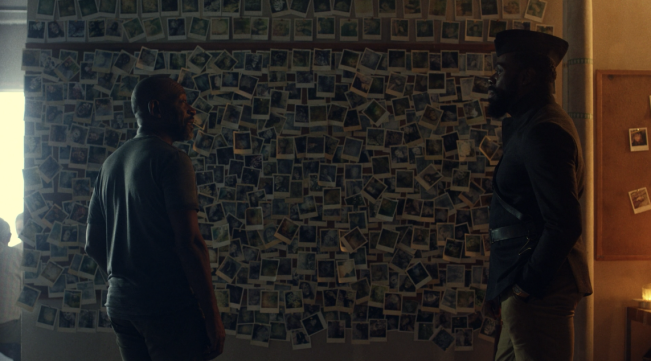 When Strand and Morgan get a moment alone, the former tells the latter he has something that needs doing. And it looks like Morgan’s the man for the job; like it or not. He’s going to have to do what Strand wants if he’s going to see Mo again, or get out of there alive, it seems. They’re interrupted by people—the Stalkers—catapulting zombies at the complex, one of which comes flying through the window at Victor and Morgan. Moments later there’s a huge blast and the entire building shakes.
Someone’s calling up to Victor; someone who’s met him before. The man is Arnold (Spenser Granese), someone Victor recently turned away from his community. He wants “a new beginning” for his group, and he has the warhead with them, pieces of which have been stuffed inside the walkers they’re preparing to launch at the building, a living “dirty bomb.” The Stalkers are giving Strand one hour to make a decision. Morgan tries to offer his help but Victor’s too suspicious and paranoid to accept it. Then Victor nearly starts to choke and they’ve got to call for June.

When Strand wakes up things are no better. The Stalkers are still waiting for a definitive answer. At the same time, Strand’s convinced he’s been poisoned while June isn’t sure what’s going on with him physically just yet. John Sr. is up on the roof with the Stalkers in his sights. He can’t take a shot, for risk of blowing up all the radiated zombies. Morgan keeps insisting he can help, if only he’s able to call Grace over the radio. Again, Victor refuses the help. Plus, they don’t use radios in the complex.
Morgan pushes until Strand agrees to call the armoury, but the communication lines were severed during the blast. Now there are zombies catapulting at the building already, even before the hour warning is up. Strand’s more worried about the artefacts he’s collected than the people inside his tower, continuing to not let anybody else take the reins. After that, he vomits a bunch of colours, signalling he was, indeed, poisoned. But was it someone inside his own walls? A troubling development for him.

All Strand wants to do now is question everybody about the poison. Though he does agree to call out to Grace like Morgan wanted, only because things have gotten so dire. He won’t let anybody do anything for him, not even Howard, who’s been his right-hand man all along. He’s going full-blown paranoid dictator. He also accidentally reveals to Wendell that he turned Sarah away. Then he charges Morgan with taking him to the armoury.
So Morgan and Victor, along with Mo, have to take a trip downstairs past fires and zombies. They’ve got to go down an elevator shaft; Morgan insists he goes, not willing to put baby Mo in more danger.
Then, down goes Morgan into a pit of death. 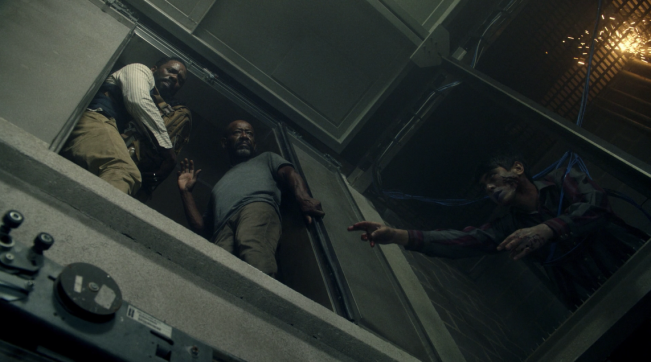 Morgan is one of the toughest characters out of any of them in The Walking Dead’s extended universe. He’s always going into the worst situations, by his own volition or by the force of others. Morgan makes it to the bottom of the elevator shaft and he wants Strand to send Mo down in case something happens to the would-be dictator. Victor agrees, sending the child down safely, even if that means giving away a bargaining chip. Then he mentions Alicia, asking Morgan to find her, wherever she is out there.

At some point, Victor passes out. He wakes to find June injecting him and Morgan returned. Things are settled now; Grace and Sarah showed up to lend a helping hand after Morgan called them from the armoury. Victor’s realising he should trust people more, but that doesn’t mean he’s changed just yet. Can he change and be a more benevolent person? Can he make that tower complex into a place someone like Alicia would want to live? Perhaps. Who knows. But Morgan’s willing to work with Strand, and the latter seems agreeable to it. Until Victor sees a blue stain on Morgan’s hand, believing it’s how he got poisoned. Morgan admits he did it, but that he did it on his own with no involvement of the Stalkers.

Morgan’s brought to the roof by Howard and the others. Before he can go over the side a phone call comes in from Grace. She says some of the radiated walkers got into the horde around the building; if they explode, it’ll cause problems, and even if they don’t they’ll leak radiation. Grace offers to remove the walkers in exchange for Morgan and Mo, and Howard thinks if they kill Morgan they’ll “make him a martyr.” Strand will let Grace inside if she follows the rules, meaning no leaving. She accepts, despite Morgan’s protest. And Morgan’s shown the door. It all leaves Victor more paranoid than before, too. No good for anybody.

Out in the wasteland, Morgan meets Dwight and Sherry again. The Dark Horses are also riding with the Stalkers, apparently. They take Morgan with them back to their new camp to meet the leader, and it isn’t Arnold. No, the leader of the Stalkers is none other than Alicia! FUCK YES! Another one of The Walking Dead universe’s best, toughest characters. Also, apparently the Stalkers have divided; Arnold and the others are not Alicia’s people anymore. Alicia now wants Morgan’s help.
But first they have to survive an onslaught of radiated walkers from the tower, and before Morgan can stop Alicia’s people the walkers are blown to bits, which puts a toxic gas cloud into the air.