Harry’s found the ouroboros stone, as well as other things, out in the woods. There’s even a rock with blood on it. Back at the docks, Harry talks with Meg about the “family crest” he found up at the teepee on what looks like a piece of a boat. She mentions “new age hippie types” that typically come to Clark Harbor. She also decides to join Harry to do more boat investigating. While they’re at the docks, Harry sees an ouroboros charm hanging from someone’s desk; isn’t that Emiliana’s desk? Very curious.
Harry goes over to Em’s place, sneaking his way in, where he finds a book about Percy, from family history to sleeping patterns. It’s almost like a psychiatrist’s notebook. Harry also notices a message scrawled on a desk: FREE THE BONE FROM THE FLESH. Lots to think about. Is Em part of a new age cult? Is she connected to the woman swimming at night?

Later when Harry returns to his chalet he hears a noise and moments later none other than Em reveals herself. She notices the trinkets and Harry says they were left out in the woods near the cliff. He questions her relationship to Percy, but doesn’t get a lot of answers. Em threatens Harry if he ever shows up at her place again. He also says that if blood belonging to Percy turns up on those rocks then, as an “outsider“, Em might find the community turning on her. So Em talks about Percy and how she changed a couple years ago, falling into booze and drugs, isolating socially, only getting worse after she left the island and came back.
One night, Percy saw Em in a kind of prayer position, which led them to talking and, soon, becoming closer. She was curious about “women doing things” around the island, like “Wiccan” spirituality. Em talked about “nature‘s cycle” of death and rebirth, a natural process. And Percy wanted to learn more about it all. Part of it was about respecting nature, colliding with Percy’s family’s business. But she wanted to understand more, and she needed it. Percy and Em went into the woods together, attempting to get closer with nature by making physical contact with a dead tree. At first it frustrated Percy, but the more she tried, the more she felt herself getting in tune with the world, as well as herself. 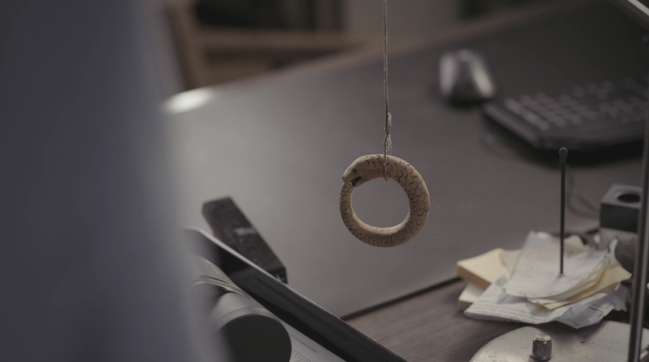 Yet no matter how much Em was helping Percy she isn’t revealing whatever dark secret and trauma from which Percy was running. Now, Harry agrees to gain Em’s trust by going through everything Percy did, including humbling himself, whatever that may mean. It’ll “be painful,” says Em. But we know the retired cop’s been through the ringer before. He steps into cold water, standing out there and submerging himself. Afterwards, Em feels his chest, telling him he’s “not ready.” So he has to back in and keep trying. Similar to his time with Vera Walker, he’s going THROUGH it.

At the teepee-like structure, Harry finds out that the trinkets he found were Em’s way of Percy symbolising various people in her life holding her back. We see a flashback to Percy being kicked out of CJ’s by his mother, that relationship symbolised in the jade statue. The cigarette case symbolised her father Sean and his never ending addiction; we see that Sean found out Percy was leaving and he gave his daughter money, loving her deeply but wanting her to get out of that place. (Also, how did Sean get hurt? Is there more to that story?) The rope we know is symbolic of Meg and the “ties that bind” family. Meg wanted Percy to take up the ropes of the family business, but the young woman didn’t want that. Grandma insisted it’s all for her family, going on about “four generations of Muldoons” and trying to guilt Percy into the family legacy. The cross symbolised Colin and his forceful Christianity he tried to impose on his niece.
Then there’s the Celtic north star with Valerie on it.
Who is Valerie? Did she die? Was it Percy’s fault? Percy ran off before Em found out. Also, Percy carved Valerie into the star after Em’s ritual. 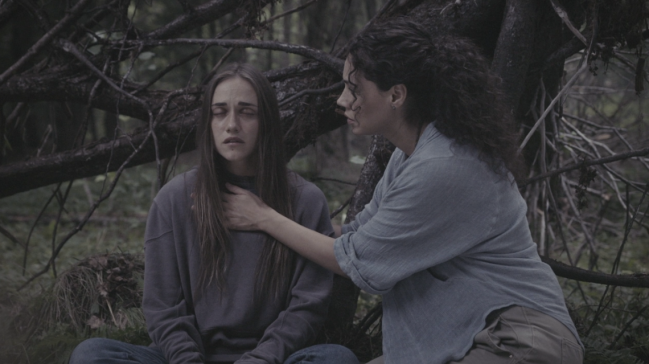 Poor Harry works through more of his own psyche with every case he tackles. He needs to retire most of all for his own mental health. He continues talking in his mind with Percy, as if she’s in the room with him again. She thinks if he keeps going he might take his own life, too. But it doesn’t change the fact that Harry feels guilt, for a lot of things he’s done, and it’s like, through Percy, he’s trying to figure out how to forgive himself. Can he, though? Or, more aptly put, will he allow himself to do that? In the morning, he calls Sonya. She mentions that whoever broke into the chalet stole a stack of pictures. She sends over the digital photos so Harry can look through them and in one he notices something on the water: two boats pulled together.

Meg drops by to see Harry about why he was with “that witch woman.” He assures the grandmother that Em never hurt Percy. He questions Meg about Percy’s sense of guilt over someone’s death. He then shows Meg the photograph. She says one of the boats belongs to the Keysers; Percy’s ex Brandon is a Keyser. At the docks, Meg and Harry wait around for Brandon to come in around his usual time at lunch. They’re surprised when Brandon’s boat comes ramming into the harbour with nobody at the wheel. Harry and Meg look around the boat for any clues. She notices something, hauling in the lines, and a foot surfaces above the water. She pulls the lines in more and there’s Brandon, dead. Harry checks further and sees a bullet hole in the back of Brandon’s skull.