A couple of young women are tweaking; one playing dominoes, the other relaxing on the couch. They’re at Nacho’s place, and they get a scare when Mike shows up with a couple men. Mike tells the women to gather their things and leave. So, is this just Mike clearing things out to keep the cartel away from Nacho? Or is Mike closing off loose ends because Nacho’s a dead man? Right now, the crew go to work, including cracking open Nacho’s safe. Mike inspects the house top to bottom for anything interesting. They get the safe open and find two Manitoba (Canada) ID cards—one for Nacho, one for his father—along with a bunch of cash.

Saul talks about being a “company man” and having perfect attendance at work for 20 years. He says he got a back injury, preventing him from working. He’s practicing with Kim. This is the next step of trying to fuck with Howard. They’re trying to get at Howard via Cliff. A tricky, intricate plan with lots of potential to get messed up. Speaking of messed up, Gus is looking over all the reports from Lalo’s supposed death. Everything appears in order. Yet the chicken man’s not so sure. And he’s looking to “keep the peace” amongst the cartel world.

Saul goes to visit Betsy Kettleman. They haven’t seen each other in quite some time. Betsy hates Saul, whereas her husband Craig isn’t as mad at him. Saul said he wants to help exonerate them. The Kettlemans aren’t sold right away. The lawyer believes there’s “grounds for a civil suit” in Craig’s case. But it doesn’t get Betsy onboard, so that’s that. Only moments later the couple change their minds. Saul then tells Betsy and Craig that Howard was impaired on “the devil‘s dandruff” while representing the Kettlemans, laying more foundation for the cocaine story. After that, Betsy fires Saul, insisting on taking care of things themselves.
And that’s exactly what Saul hoped would happen.

Nacho continues hiding out at the motel, staying inside most of the time and eating whatever food is left outside the door for him. He notices a man wandering around near the parking lot, keeping an eye out from the window. It’d be hard not to fall into paranoia. Nacho can’t let his concentration slip even for a minute because there could be someone waiting to kill him just about anywhere.
At the office, Clifford hears about the Kettlemans looking for representation. He meets with Betsy and Craig, who tell him about Howard doing cocaine while representing them. Craig claims he heard about it “out in the yard” in prison. He and Betsy believe discovery in a trial would uncover Howard’s habits. Clifford says there’s a conflict of interest because they’re partnering with HHM. He also doesn’t believe the story and doesn’t think the case will go anywhere regardless. But will this sit well with Howard? Maybe not.

Gus and Juan go to see Hector at the nursing home. The chicken man talks frankly about his trouble with Lalo, admitting they were never good pals, but he insists he’s there to support the Salamancas. Juan also offers his allegiance and says they’re all searching for Nacho to get justice for Lalo. Of course Hector knows things neither Juan nor Gus know, particularly that Lalo’s still alive. Hector reaches a hand out to shake Gus’s hand, yet Mr. Fring doesn’t feel any warmth from it. Afterwards, Gus calls Mike to tell him: “Lalo Salamanca lives.” We also see Juan is doing his own investigating into Nacho, uncovering the IDs Mike had previously found. Not just that, Juan further discovers the hotel where Nacho’s staying. Uh oh. 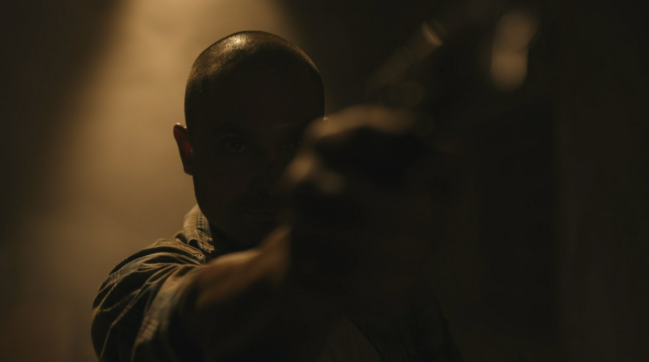 When food comes for Nacho he tests to see if someone’s watching nearby and he notices someone moving in a rundown building across the parking lot. His paranoia is for good reason. But, what now? Nacho busts the air conditioning unit out of the wall in back of the motel room, sneaking out unseen. He makes his way around to the rundown building, allowing him to get the drop on the man watching him closely. He holds a gun on the guy, questioning for whom the man is working. He gets no answers. So he calls Mike and says “something‘s not right.” Mike assures things will be fine if Nacho stays put. But Nacho doesn’t trust anybody anymore and hangs up. Then the man’s phone begins to buzz, right before Nacho cracks him over the head. Now, Nacho’s going to make a run for it. Except the cartel arrive with a bunch of gun-toting men, including the Salamanca twins. Nacho rushes to hotwire a truck but the guns start blazing, forcing Nacho to take cover and fire back. The Salamanca brothers kill one of the cartel members because they insist they must take Nacho alive. Right before they get him, Nacho gets the truck going. He’s left to play chicken with the Salamancas, driving at them while firing his gun, and he plows his way out.

Mike chats with Gus about their current situation. He believes Varga’s probably searching for Nacho and that, eventually, Nacho will wind up getting caught. Mike wants to track Nacho down before the Salamancas find him, or else Nacho might be caught, tortured, and give up info that’ll lead everything back to the good ole chicken man. Gus instead wants to go the route of putting pressure on Nacho’s father. This upsets Mike, who insists it won’t happen. Tyrus puts a gun in Mike’s face, waiting for an order from Fring to pull the trigger. Then a call comes through to Mike’s phone; it’s from Nacho. He answers and then Nacho wants to talk with Gus.

Saul and Kim go see the Kettlemans together this time. Craig and Betsy are pissed off about being sent on a wild goose chase, all to “character assassinate” Howard. Saul plays it off and pretends it’s nonsense, offering a wad of cash to assuage any bad feelings on the Kettlemans’ part. Betsy insists she wants her husband’s name exonerated. She threatens to go to Howard if Saul won’t help. Soon, Kim has enough of the sob story from Betsy and Craig, dialling up a good friend at the IRS to report the Kettlemans for tax fraud. It’s nasty stuff. Saul’s starting to see more and more what he’s done to Kim. He has eroded her morals, almost entirely, and she’s become a monster. Kim goes hard at the Kettlemans until they forcefully see the light. In a way, she’s doing good by forcing the couple to own up to their mistakes, but it’s very hypocritical of her to act like she’s a righteous person while doing her own illegal business. Before Saul and Kim leave, he says “wolves and sheep” almost under his breath; a reminder of the man who once ripped off his father at the store and what he said about deciding whether you want to be a wolf or a sheep in this world.
And who’s following Saul and Kim right now?