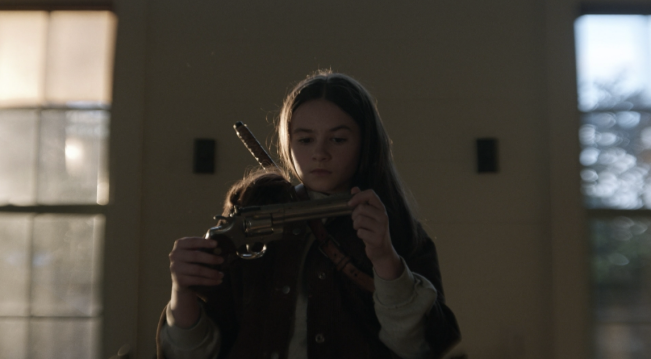 Judith talks about not getting to know her mother Laurie. She mentions that her brother Carl longed for days of peace. She says her mother Michonne tried hanging up the sword. She says that Rick was “searching for mercy.” And now, it’s Judith Grimes hanging onto whatever she can of those she loves, whether family or friends. She also says that this is the day that “changed everything forever.”
Gabriel and Rosita are desperate to find the remaining children, as are the other survivors. Now they’re preparing to get things done. Negan goes to Maggie, suggesting they go take Pamela out themselves, but she isn’t keen on teaming up with him, regardless of their circumstances. Maggie has to say goodbye to Hershel again for right now, as does Negan with Annie, and many others with their friends and chosen family. Judith wants to go along, too, but Daryl says he wants her to stay. She’s intent on going. She believes it’s very important, especially to honour the other Grimes’s who came before her. Daryl agrees, so long as Judith sticks by his side.
In a safe house amongst the Commonwealth, Mercer delivers Eugene to Max and Yumiko. The women didn’t know anything until now because Mercer was playing things close to the chest. Mercer has to gather more soldiers to make a move against Pamela before they can do anything. That means for now Eugene must remain at the apartment unseen.

The Commonwealth train is commandeered; the gang are on their way. Negan asks Ezekiel why he did what he did, and Ezekiel says he didn’t want Negan to become a martyr, that’s “too easy.” The former King wants Negan to keep on making up for his horrific actions by living and contributing to the greater good. Negan says he did what he did because he knows that Ezekiel and the others are better than him, and he wanted to try saving them by giving himself up. Daryl and Carol tell Judith how much her family would be proud of her. Uncle Daryl promises that one day he’ll tell Judith all the stories he can remember “about all the people who loved you.”
In the Commonwealth, Pamela’s dealing with continuing disturbance amongst the citizens. She also hears the bogus story about Eugene escaping. Mercer tells Pamela that people are “unhappy with the verdict,” and there’s existing unrest over previous disappearances. But ole Pam doesn’t care. She just wants order.

Aaron and the others, still amongst the horde, are trying to make a slow escape into the trees as soldiers lead the walkers. They run into more walkers being led out of the woods, causing a traffic jam that just takes them right back out to being herded behind the soldiers’ vehicles. It’s all a bit TOO close to the Commonwealth for comfort, too.
Inside the Commonwealth’s walls, Mercer does a pretend investigation to make things look legit. He suddenly receives a call on the radio from Princess, who’s finally able to get a radio signal from the train. He asks what they’re planning, and Princess simply says they’re going to “change things” by taking Pamela out. Mercer’s more than cool with that, especially with people previously disappeared coming, since that’s “legal grounds” for him to move against Pamela. But then there’s an alarm sounded due to the horde of walkers headed for the city.

Within the horde, Aaron and the others keep trying to break off, eventually making their way inside an RV. Unfortunately Jules gets pulled into the horde and separated from the others. And FUCK! Lydia’s chomped by a zombie trying to help Elijah, who also gets separated. After SO MUCH despair and violence in Lydia’s life, she takes a bite. Goddamn it. Jerry and Aaron insist they have to take care of the wound before the infection spreads, but Lydia only wants to go for Elijah. They manage to get her calmed down enough to ready her arm for amputation. Aaron tries to offer her strength: “You are so loved, Lydia.” Then Jerry chops off Lydia’s forearm. Later, he also heads out alone to find the others again.

The gang on the train are in place. They’re trying to decide the best way forward when a couple Commonwealth soldiers on guard hear them, but the soldiers end up getting a call about the horde, rushing off to help. This allows Daryl and the others to keep moving. Meanwhile, the soldiers near the horde get ambushed by a ride along zombie and this causes chaos, alerting Mercer back at the Commonwealth.
Inside the city walls, Maggie, Daryl, and the others make it to the main building, but it’s locked inside and there are soldiers waiting with guns. An ambush. Gunfire erupts as the survivors take cover, trying to take their own shots, as well. Pamela herself picks up a gun and she’s about to shoot Maggie when Judith pushes Maggie out of the way. The little girl takes the bullet, shocking even Pamela. Though Ms. Milton only screams: “You did this!” So Daryl tells Ezekiel to toss a nearby fire extinguisher and he shoots it out of the air, giving them cover.

The climbing walkers have started to infiltrate the Commonwealth’s and the soldiers guarding one of the walls are having trouble, one of whom gets chomped viciously by a zombie. And this leads to the dying soldier accidentally opening the Commonwealth gates, letting the horde of undead outside come on inside. Pamela’s alerted to the situation and she panics. She only cares about herself, shoring up security at her home and urging her soldiers to push the horde towards the “lower wards” of the city. Daryl and the rest of the survivors, along with an unconscious, wounded Judith, scramble through the Commonwealth seeking shelter, but they’re surrounded by barricades suddenly put up by the soldiers.
That leaves our survivors stuck in the streets with all the zombies being filtered into the city’s poor areas. But it doesn’t mean they’re giving up. They keep moving, looking for a place to hide. Daryl’s able to slip through an alleyway, leaving the others behind, and Judith comes to enough to look up at him, mumbling: “Daddy?” My god. My heart. The finale is going to be wild, and likely, somehow, devastating, too. Be prepared.