I’m a big fan of Thomas Harris and his Hannibal Lecter-centric novels. Everything about them appeals to me, though, I’m not particularly fond of Hannibal Rising. My favourite, an unpopular view, is actually Hannibal – I think it’s an intensely savage, relentless piece of work with a wild twist at the end. But close by equally are Red Dragon and The Silence of the Lambs. The Jonathan Demme version of the former is one of the best movies ever made.
In opposition, I’ve got to say that I prefer Michael Mann’s Manhunter over this version. Regardless of how well this sticks to the story in comparison, I still love the way Mann treated that adaptation; incredibly different and cool.
Part of why I’m not huge on Red Dragon, even though it’s a good movie, is because I don’t really find Brett Ratner all that interesting as a director. I can honestly say this is the only movie he’s directed I genuinely enjoy. Everything else he’s done is so ridiculously generic. There’s nothing I find appealing about his work. I think the only reason he succeeded in making me enjoy his work here is because Thomas Harris provided the backdrop. Plus, Edward Norton, Ralph Fiennes, Harvey Kietel, Emily Watson, Anthony Hopkins, Philip Seymour Hoffman, a returning Anthony Heald and Frankie Faison – could it really have gone terribly wrong?
While I do like this movie, I don’t think there’s anything overtly incredible other than the performances. Ratner is a mediocre director at best, in my mind; plenty of people love him, I have no doubt. He is a successful man. Just not my cup of tea. Overall, the lack of a really palpable style is the only thing I find truly lacking about Red Dragon. The reason I loved Manhunter so much was because, aside from the excellent William Petersen and Tom Noonan performances, Mann injected the story with so much of his style that it came off so interesting and beautiful to watch. With this version, Ratner merely shows it to us. It looks good enough, but I don’t feel as much of the story as I do while reading Harris, or when I watch other incarnations of Hannibal Lecter on television and film.

I’ve always thought the opening scene to Red Dragon showing Hannibal Lecter (Sir Anthony Hopkins) watching the orchestra was an impressive way to show why he kills. Part of him hates rudeness, another part of him also love the finer things of life – anyone who gets in the way of that is subject to being on his plate, as well as the plates of his dinner guests. With this sequence, we’re introduced to a piece of Lecter then also Will Graham (Edward Norton) shows up.
So it works in two ways, by both introducing Hannibal – though we’ve already seen him plenty on film – and simultaneously introducing his relationship with Graham. It’s an effective opener which draws us in immediately. Even more than that, the script starting from the beginning sets itself apart from Michael Mann’s Manhunter; I don’t know if you’d call this a remake, or more so simply another adaptation of Thomas Harris’ Red Dragon. It’s an exciting, intense, and very wide opening in scope.

Being a fan of Edward Norton, he’s honestly one of the weakest links in this film. I think he has the potential to be a great actor, but some times he just looks to be phoning things in. There are moments in Red Dragon when he does excellent stuff. Other times he might as well be toeing a hole in the sand with his shoe. The character of Will Graham is complex. I think William Petersen brought something to the role in his own way, certainly Hugh Dancy has done a fantastic job with the 39 episodes of the NBC series, but Norton sort of feels generic here in the role. He’s not bad, I don’t mean to say that. There’s definitely a likability about Norton’s Graham, what I feel like I’m missing is the tortured side, the apprehensive man who doesn’t want to have to go back into what Jack Crawford (here played by Harvey Keitel) is asking him to do; something which nearly killed him before with Lecter. In Norton’s performance there doesn’t seem to be as much of that wary Graham, the one whose mental capacities allow him to feel and understand things no one ought to ever feel or comprehend.

I do always enjoy Sir Anthony Hopkins, particularly as Hannibal the Cannibal. He has a highly quirky charm and chill at once. Some say it’s overacting, I say it’s an excellent fictional serial killer who has an odd affectation. It’s silly to me people will accept Hannibal and all his cannibalism, all the wild stuff he’s gotten up to over the course of his character-lifetime, yet then they’ve got a problem with how Hopkins is a bit hammy at times. Really? You’re going for that?
The only thing bad about Hopkins here is the fact I don’t really think he and Norton have much chemistry together onscreen. Their scenes are decent enough because Lecter is always creepy, but the back and forth between Hannibal and Will here is nowhere near as good as it was between Hannibal and Clarice in The Silence of the Lambs, and certainly doesn’t come close to touching the Hugh Dancy-Mads Mikkelsen energy in Bryan Fuller’s Hannibal series. It just doesn’t work as well as any of that, so it comes nowhere near some of what Harris did either. I think, again, this mostly has to do with Norton. He’s a fine actor, just not in this movie. There’s nothing impressive to me about his performance here, as say opposed to American History X or his debut performance opposite Richard Gere in Primal Fear.

Ralph Fiennes is the actor who shines most of all in this good yet slightly dull version of Red Dragon. Francis Dolarhyde has always been a morbidly fascinating character, to me and to many out there. Even if Red Dragon is not my top favourite of Harris’ novels – though still amazing – there’s something about Dolarhyde in particular, even above Buffalo Bill, which terrifies me. Fiennes is one talented man beyond a shadow of a doubt. Here he brings a ferocious intensity to the role.
While it’s easy nowadays to forget this great performance due to Richard Armitage’s fabulously involving turn as Francis Dolarhyde on NBC’s Hannibal, Fiennes still knocks this role out of the park and into the lot. There’s a difference between Fiennes and the other incarnations, just as they’re unique in their own ways. What I like about Fiennes is that I find him highly unpredictable. He’s the type of actor who doesn’t telegraph his emotionality, he sort of springs into action so suddenly, which really comes through here. Truly, every single frame of the film in which you find Ralph Fiennes he is incredible. There’s a physical aspect to the character on several levels – he’s physically fit and actually a handsome guy, but inside he feels hideous, deformed, and like a monster. So what I enjoy is the fact that Fiennes is an attractive man, however, the makeup work for Dolarhyde’s hairlip gives him an unsettling feeling – not because of the scar, merely because of how Fiennes portrays Dolarhyde and the way he feels about his outer appearance. He’s at times equally sad and sympathetic, and also frighteningly savage.
Still, my favourite moment with Dolarhyde has to be his official introduction, a little over 40 minutes into the film. It’s such an unsettling view into his world, where we see him lifting weights and yelling at his dead grandmother whose voice scolds him – as a child and still as a grown man. Even creepier is the way he opens his big scrapbook, full of articles about Hannibal Lecter and Will Graham – it’s when he sort of strokes Lecter’s picture, specifically his smiling mouth, that you get this awful feeling in your gut. What an effective first look at Francis Dolarhyde here. Impressive sequence from Ratner, I must say.

While I don’t find the movie to be poorly written, by any standards, for some reason I do not get the same feeling about Ted Tally’s script here as I did with his work on The Silence of the Lambs. Not sure exactly what it is about this screenplay, there’s not the same impact as his previous adaptation of Harris’ work. I do like plenty of scenes, but there’s less tension and suspense than in the Jonathan Demme directed film. Now, I’ve never actually read the script itself, so maybe there’s bits and pieces of Tally and his writing which didn’t make it through to what Ratner did onscreen. I’ll not know until I read the screenplay someday. But still, there’s an overall lack of the tensely cultivated atmosphere from Demme’s 1991 Harris adaptation, and I think there must be part of the problem there lying in the screenwriting. Then again, I’m not particularly big on Tally overall, as nothing else he’s done particularly impresses me other than The Silence of the Lambs. 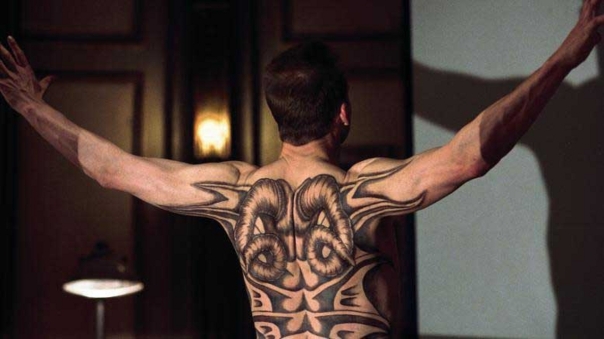 In the end, I can only give Brett Ratner’s Red Dragon 3.5 out of 5 stars. I know some will surely call me crazy. It’s not as simple for me to say this is an amazing movie. It’s just… not. Better than average? Sure. There are great performances, from Anthony Hopkins, Ralph Fiennes, Philip Seymour Hoffman and Emily Watson both of whom I forgot to mention – she does a fantastic job playing the role of Reba McClane, the blind woman who falls in love with Dolarhyde. Even further, the story itself is good enough to carry this even if the actors weren’t so great.
But the lack of style, a few little mistakes here and there, as well as a bit of a yawning performance from Edward Norton, all makes it hard for me to even feign agreement when people say this is SO AMAZING. I remember seeing this in theatre – I was so pumped, beyond excitement. It didn’t live up to the hype then, it still doesn’t now. I do own this on DVD, because I’m a completist; even own Hannibal Rising which isn’t the greatest either. I just really can’t get onboard with people saying this is incredible or that it’s better than Manhunter. Nah, not for me.
Still a decent adaptation of the Thomas Harris novel, Red Dragon is a good movie. Don’t think it’s better than it is, there are plenty of flaws and not enough style to Ratner’s direction to forgive them. See it and be your own judge, but do not get sucked into the hype. There are better visions of Will Graham, Hannibal Lecter, Jack Crawford, and Francis Dolarhyde elsewhere.