Dt. Ambrose uncovers something much more disturbing, much more far reaching than either he or Cora expected.

Back to it with Part 2 of the double bill for Halloween, Edward Mordrake (Wes Bentley) moves on to the other freaks – Paul (Mat Fraser), Legless Suzi (Rose Siggins), and so on – who each tell him and the devilish face their respectively sad, depressing stories. Pepper (Naomi Grossman) and Salty (Christopher Neiman) are deemed to have “no shame” by Edward.
Suzi ended up on the streets, no work for someone with no legs and lower half at all. She confesses the crime of stabbing a man in his legs, simply for spite, which actually killed the man. Though, Suzi went into performing afterwards because she had no other options and Edward deems this inspiration.
Paul meanwhile had to turn himself into a freak because he says he could “never make the world love me.” He only decided not to tattoo his face because it was the only part of him left normal, handsome, and therefore ought to stay natural.
Mordrake does not accept any of them and so moves on through the campgrounds.

Finally, Mr. Mordrake finds himself in the tent of Elsa Mars (Jessica Lange). She’s more than happy to see him, still not under the correct impression about who he is; still thinking he’s there to make her famous, to pluck her from the obscurity of Jupiter, Florida and its muggy swamps.
Soon enough, though, Edward reveals himself and stakes his claim. He wants to hear all about Elsa Mars, her deepest fear, her darkest shame, everything and anything at all.
Turns out Elsa, during 1932 in the Weimar Republic, was doling out lots of nasty fetishism – apparently before Hitler turned it into war, the Germans were working it all out “with their cocks.” She never had sex, but worked as a dominatrix catering to plenty of rotten men. One of the more brutal moments in the entire series comes when she makes a man sit down on a toilet; its seat full of upturned nails. She did lots of shows for men she called The Watchers, becoming quite popular among the perverts of Brandenburg.
Eventually she found herself lured into a truly terrifying situation, which led to the removal of her legs – The Watchers got her nice and drunk, drugged up, for a little solo show. No co-star this time, only a chainsaw they use to chop off her legs at the knee.
And still, after all the tragedy and horror in Elsa’s past, Edward opts not to take her.
Jimmy Darling (Evan Peters) is having a tough time dealing with Esmerelda (Emma Roberts) and her attitude. At the same time, he clearly enjoys her company.
They find themselves crossing paths with Twisty the Clown (John Carroll Lynch), who chases down Bonnie (Skyler Samuels) after she escapes. Ever heroic Jimmy decides to go after the creepy clown, not wanting to let the girl he carries off into the night to suffer any more.
But things go to hell, as Dandy is about with Twisty. What happens is Esmerelda and Jimmy end up tied and trapped back at the rusty bus camp for an impromptu show. The so-called mystic finds herself in a real circus act when Dandy tries to saw her in half with a huge saw. Jimmy gets free, luckily, and knocks Dandy down while Twisty tries to get everyone clapping, madman that he is. Things devolve and Jimmy finds himself choked out by the terrifying clown. Lucky for him, Mordrake and his second face show up, green smoke curling inside the bus. 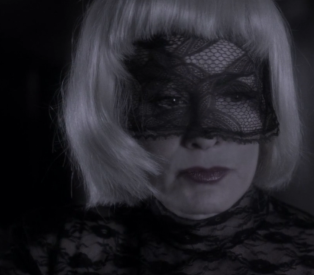 Now we get to hear all about Twisty! He’ll have to reveal his worst shame, his deepest pains and wounds. Moving backwards to 1943, Twisty reveals he was the clown for children at West Chester’s carnival. He was proud of doing a great job for the little boys and girls. The freaks hated him, jealous of his popularity and talent, so they accused him falsely of molesting children and tricked him into running off; sadly, Twisty doesn’t seem to have ever been very bright. He gave up being a clown and went back to Florida, to Jupiter, trying to make old things into toys for children. This led him into a confrontation with the store owner in town (the one whose head he lopped off earlier in this season), which changed his life forever.
Back the bus, his home, he decided to try blowing his face off. You can tell where this went. Then later on he abducted children and other people, all in order to make them laugh, to give them what they wanted when their parents gave them nothing or refused. Twisted, hey? Twisty is an appropriate name.

And so with Mordrake goes the evil clown. I honestly didn’t see that coming first time around when I watched this season as it aired. Still, though, it’s clear with Mordrake and his legions of dead, no matter in the afterlife or not we’ll probably see more of Twisty at some point or another. In a way, now he’s at peace in the beyond with all the other dead; even his face is back to normal again.
Of course, sick Dandy comes by and takes the clown’s mask for his own face. Better off, now he looks more outside like he does on the inside, anyways.
Jimmy Darling comes off as the big hero after he and Esmerelda are found when the cops show up. When a bunch of cars show up at the freak show, Elsa thinks they’re being laid siege upon. Instead, the townsfolk wanted to come and shake Jimmy’s hand – HIS HAND! – all for saving the children and the town as well. A really beautiful scene where the “normal” people come together with the “freaks”, the divide no longer so distant now that one side has proved to be capable of loving the other, being gentle with the other. Great bit out of this episode, kind of heartwarming. If only for a brief reprieve.
Finally, the greasy Stanley (Denis O’Hare) – a.k.a Richard this time – shows up and flaunts the idea of Hollywood, California in front of Elsa. 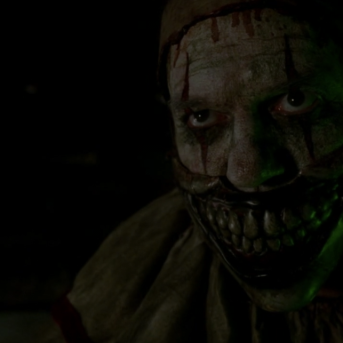 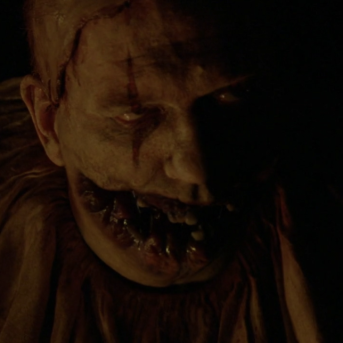 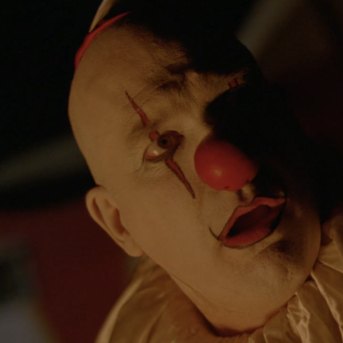 The episode ends with Dandy, his new and fitting clown face on, slitting a nice rip across Dora’s throat, letting her bleed all over the floor to her death. A disgustingly satisfied and happy smile forms across Dandy’s face and he laughs himself almost to tears. 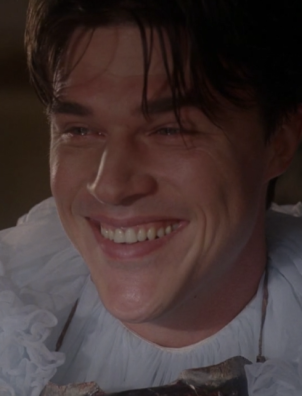 Next episode should be an incredible one! This was an awesome two-parter for Halloween, expect no less from Ryan Murphy and Co. Can’t wait to review the next episode, “Pink Cupcakes”, which is directed by Michael Uppendahl once again.