This 1977 horror-thriller, The Creeper a.k.a Rituals, is one I’ve heard about for about for well over a decade now, almost two. Horror fanatic since the age of twelve, when I first discovered Hal Holbrook outside of those interests I soon came to discover he’d been in an early slasher type film. So sticking that in the back of my head, at the time with no real way to see the movie since it wasn’t at my local video store, I hoped someday I’d be able to finally see it. Somehow. Some way.
Well recently I tracked down a digitally remastered copy from American Pop Classics, which was reasonably priced and pretty decent looking for such a rare cult horror flick. This one came out on the verge of slasher horror becoming super popular, due to John Carpenter. It wasn’t the first, with classics such as Black Christmas coming out in 1974, Psycho having been released seventeen years prior. But still, I think The Creeper did some interesting things. This movie might not have hit it big, it didn’t at all from what I gather, don’t let that sway you. There’s a good bit of backwoods horror here and most certainly anyone who has seen it will find themselves influenced by its creepy qualities.

A group of doctors get together in the Canadian wilderness. They’re dropped off by plane out to some remote part of the forest. The men head to a place called “The Cauldron of the Moon” by Aboriginal peoples. Hiking through all sorts of terrain, the doctor friends camp for a while. However, once they’re shoes go missing, except for one man, things start to get scary.
The one with his shoes left decides to walk out for help. It’s after he leaves when the others discover something disturbing is happening in those woods. A deer head appears outside their camp, then the terror truly begins. 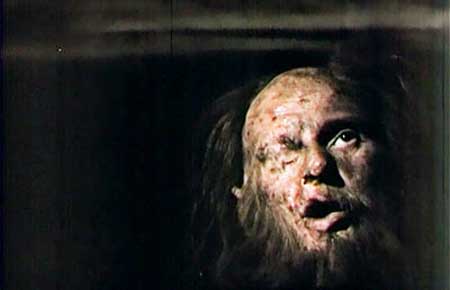 There’s a bleak atmosphere from the beginning of The Creeper. Everything is isolated, so far up into the backwoods. Even further, director Peter Carter captures the desolate feeling with a ton of great wide shots; the forest and the mountains together swallow up each of the characters. There are so many beautiful scenes. Even when one of the doctors ends up with his decapitated head on a pike, and another of them throws it down the mountain in anger, there’s this sweeping shot that goes over Hal Holbrook’s head as the head/stick goes flying; strange for it to be a beautiful shot, but it certainly is that.
Another thing I think helped overall is that this screenplay wasn’t the typical slasher horror writing either. Perhaps because it was one of the earliest slashers, a prototype, it didn’t fall for all the exact similar things later slashers made into the genre tropes. Better than that, the characters themselves were decently developed. There were a few points where I thought the development was subtle, things didn’t get spelled out obviously right in front of us; for instance, a conversation around the fire has two of the doctors revealing bits and pieces of their lives before the events of the film, sort of filling in gaps to who they are as people. A lot of modern slashers try to jam pack loads of exposition into their screenplays. Here, there’s enough to hook us, but also leaves some things to our imagination. Part of The Creeper‘s charm is, evidently, the way it sort of creeps on you. Between the isolation, the wide and desolate shots, as well as the characterization, everything in the film will grow and fester in you until the events start to get real terrifying.

The moments of slasher horror, so to speak, are pretty damn effective. From the beginning, when the deer head shows up, things are nasty enough. Solely because of the malicious intent. But things only get worse and worse. The decapitation, as I mentioned. Afterwards, one of the doctors ends up tied to a a stake and lit on fire. There are several truly gruesome aspects to the film.
I think it’s the very finale I found most jarring. There a two instances where the sound design uses an echo, which was interesting. It worked and had a strange effect. It’s unsettling, yet I can’t say exactly why. Sort of amplified the emotions happening at the time, almost as if the echoes were in the characters’ own heads.
Ultimately, what makes so much of The Creeper work in terms of its outright horror is the solid acting from Holbrook. He really has great skills. Even when the rest of the acting isn’t all perfect, Holbrook keeps us grounded and his intensity, the anxiety he gives us through his character, all the tension in him, it helps the horror and terror of the plot become more plausible, it feels more real. In particular, there’s a scene where Harry (Holbrook) discovers a deep cut around his femoral artery, and he stops for a moment, regrouping, as his friend is tied to the stake; the way Harry is calm compared to the other man, the demeanour he displays, this gives us such an excellent impression of this man’s character. I imagine Harry as a good doctor, someone who doesn’t allow the pressure to bear down on him. These few moments were great in this respect. Not only that, the entire sequence following after is horrific and Holbrook makes it come off spot on.
The final shot of Harry sitting on the highway was amazing – panning back behind him, the open road ahead, such a fitting way to end things after all the chaos. Everything becomes sunny, open, beautiful, as opposed to the darkness and horror in the forest. Love this finish.

While there are some aspects which could’ve been improved upon, The Creeper deserves a 4 out of 5 star rating. I truly feel this is a good slasher, especially considering this came a year before John Carpenter’s Halloween. With a good lead actor to hold things in place, some nice writing and very effectively creepy effects at key moments, this is a solid cult classic. It’s tough to find and the quality of the DVD I found isn’t even immaculate, nowhere near. But you’ll be surprised. This is a very subtle and low budget film, though, its merits are evident once you get through the film. For a rare movie, I’m pleased to have even gotten a copy. Check this out if you’re ever so lucky. You’ll find a nice dose of slasher horror in an unusual package.